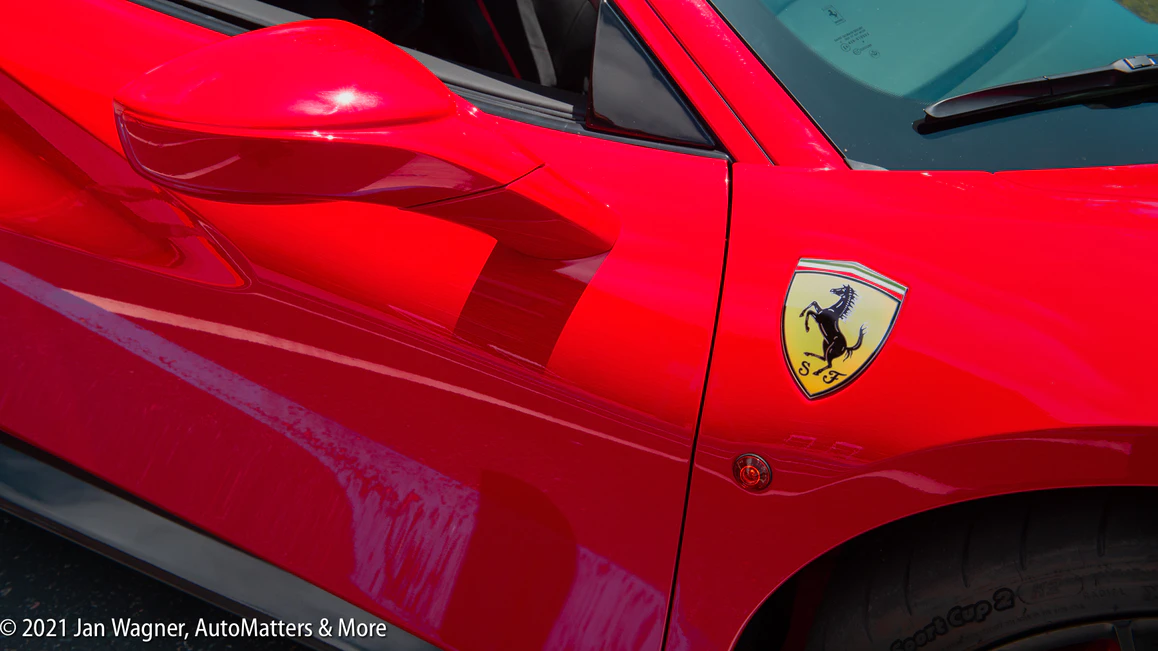 PASSION ON DISPLAY AT THE ANNUAL “FERRARIS AT CIELO” CAR SHOW

While this was the club’s third annual show at this venue, it was by no means one of their first car shows. Way back in 2005, I covered their event when we were honored with the presence of automobile racing legend Phil Hill (see “A Day & Drive with Phil Hill,” in “AutoMatters & More” #147).

I interviewed the organizer of Sunday’s event, who lives in the community of Cielo. The turnout — both in terms of participants and visitors — far exceeded expectations, with roughly 45 cars on display, mostly from the immediate area.

Several dealers were represented, including Ferrari of San Diego who was the event’s primary sponsor. They brought three cars: A Ferrari F8 Tributo Spider, a Ferrari Roma and a Maserati. They also offered test drives to people who signed up in advance, for which they were quickly booked solid.

The non-profit San Diego Ferrari Owners Club runs about 12 events per year. After expenses, funds collected at their various events go to charities that include Ronald McDonald House, Wounded Warriors and the Make A Wish Foundation.

The purpose of their club is to bring people together who have a commonality of interests, centered around the automobile, and to have fun, but it is more than an interest, it is a passion. Car people are very passionate about what they drive, no matter what it is or what its price tag may be. Driving their special cars puts smiles on their faces. You also get to meet a lot of great people. They talk about cars, shows, and auctions all over the country and all over the world.

Owning a Ferrari is not a requirement to be a member, or to participate in events. The club has three or four driving events over the course of each year.

In February, which is Enzo Ferrari’s birthday, they usually gather together maybe 20 to 30 Ferraris and drive up around Julian and Temecula, with a stop for a fabulous lunch at a winery.

They just had a driving event that ended up at the San Diego Auto Museum, in Balboa Park.

Another driving event is still in the early planning stages. They will be going to go to the Bugatti Museum in Oxnard.

The winner of the People’s Choice award was a beautiful, 2003 Enzo Ferrari.

My vote went to a fantastic replica of a 1967 Ferrari 330 P4, street-driven race car — the originals of which were most recently made famous in the hit movie “Ford v Ferrari.” In addition to being raced at Le Mans, it “won numerous races and earned its place in the history books after a memorable 1-2-3 at Daytona,” as stated on Ferrari.com.

According to the replica Ferrari 330 P4’s owner, it was built in the late 1990s by a company in Detroit. These are very difficult to find. Ferrari has taken legal action against their manufacturers, so no companies build them anymore. After years of searching, the owner found this car four or five years ago on the Internet.

This replica is much like the original, but with one significant difference. Like the original, it has a monocoque chassis, and other comparable details abound, but in place of the original’s V12 engine, this one is powered by a Chevy. The owner considered replacing this engine with one that is more authentic — perhaps a V12 Ferrari Testarossa engine — but this car drives extremely well as is, and has plenty of power. It also makes glorious sounds!

He told me that he bought it because: “I like the shape of it. It’s pretty much a race car underneath, so it does what it was built for. … I love it. I love it for the fact that it’s a cool car.”

There is that passion. It is the essence of what makes a car person tick, and why car clubs like this one exist.