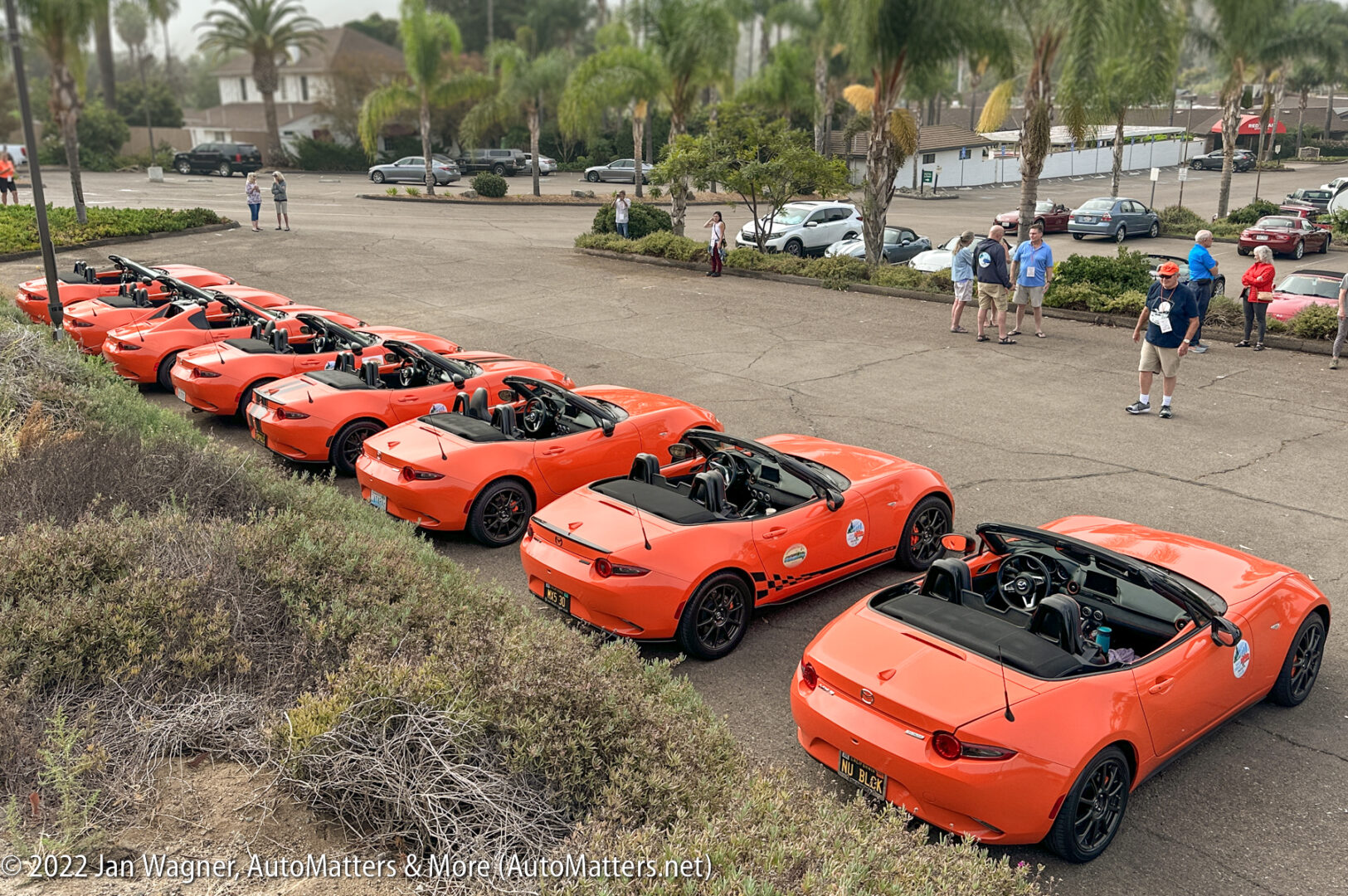 Participating in car club activities, including the San Diego Miata Club’s SURF ‘N’ SAFARI, is a huge benefit to driving a sports car.

Some clubs are dedicated to one particular make or model of car, whereas other clubs welcome all sorts of makes and models. Some clubs gravitate mostly towards competitive motorsports events; others are focused more on social events; and some are both.

I have been a member of various car clubs stretching back decades — first in Western Canada, where I am from originally — and, more recently, in California, which is where I moved to in the 1980s.

I’ve owned many sports cars over the years, four of which being Mazda Miatas. Aside from my especially enjoying driving them on public roads (the more tight turns, the better!), I also autocrossed them from the late 1970s until just a few years ago (autocrosses are relatively low-speed, competitive driving events that usually include some very tight, slow turns, and are often held in parking lots, on courses delineated by traffic cones).

In San Diego there are many car clubs. One car club that is particularly large and active in social events, including road trips, is the San Diego Miata Club (SDMC). A small group of members, including myself, used to also regularly compete in the Sports Car Club of America’s San Diego Region autocrosses.

According to long-time SDMC member Steve Waid, the club started in March, 1996. He and his wife joined in early 1997. His first Miata was a used 1990 model, but how he ended up choosing it, which became their first of several Miatas, was not what you might expect. He was looking for a particular yellow Corvette roadster — the 1987 Indy Pace Car model. However, since those proved hard to come by and he had driven a Miata once, they decided to “just go get a Miata until we find the Corvette.” “Well, guess what? It’s 2022. We still haven’t found that Corvette!”

Every few years the SDMC holds our special SURF ‘N’ SAFARI event, made possible thanks to the efforts of a large group of enthusiastic volunteers. Miata drivers come from across the country and beyond to participate in the Miata fun and camaraderie. SURF ‘N’ SAFARI 2022, which was held this past weekend, was headquartered at the Singing Hills Golf Resort at Sycuan.

Our first full day featured a choice of drives on what were predominantly two-lane, winding public roads through San Diego County’s scenic back country.

I chose to go on the longest of these drives: the 5½-hour Desert View Tower Run. Its location was a way station for travelers for centuries. To get there we enjoyed a brisk drive along San Diego County’s Historic Highway 80.

On our way back, we stopped for lunch at beautiful Lake Cuyamaca. Other drive choices were the Mt. Helix, East County, Camel Dairy and Julian runs.

After our runs, we took advantage of snacks, socializing and goodies in the resort’s hospitality suite, followed by our first of two banquets: the California Luau Buffet. Live music was provided by the incredible Gary Seiler (visit GarySeiler.com).

The next day (Saturday) was the SURF ‘N’ SAFARI rally.

Designed to take the better part of the day, it required following a lengthy and convoluted set of rally instructions that were devised by the aforementioned (and devious) Steve Waid. One of his stated goals was to level the playing field so that the rally did not favor locals over out-of-towners, intentionally making the instructions tricky to understand. It certainly had the desired effect on me. I was unable to even correctly follow the directions to get out of the first destination: San Diego’s Balboa Park. Between my utter confusion with the rally instructions, the fact that I did not have a navigator, and the massive crowds of people in the park that day, I soon decided to be gracious and let someone else win the rally.

That evening we enjoyed our second banquet, where Steve publicly acknowledged my utter inability to decipher his rally instructions.

On Sunday, we met one last time to recognize several special cars, and to take group photos of the orange 30th Anniversary Edition 2019 Miatas (one of which was mine).