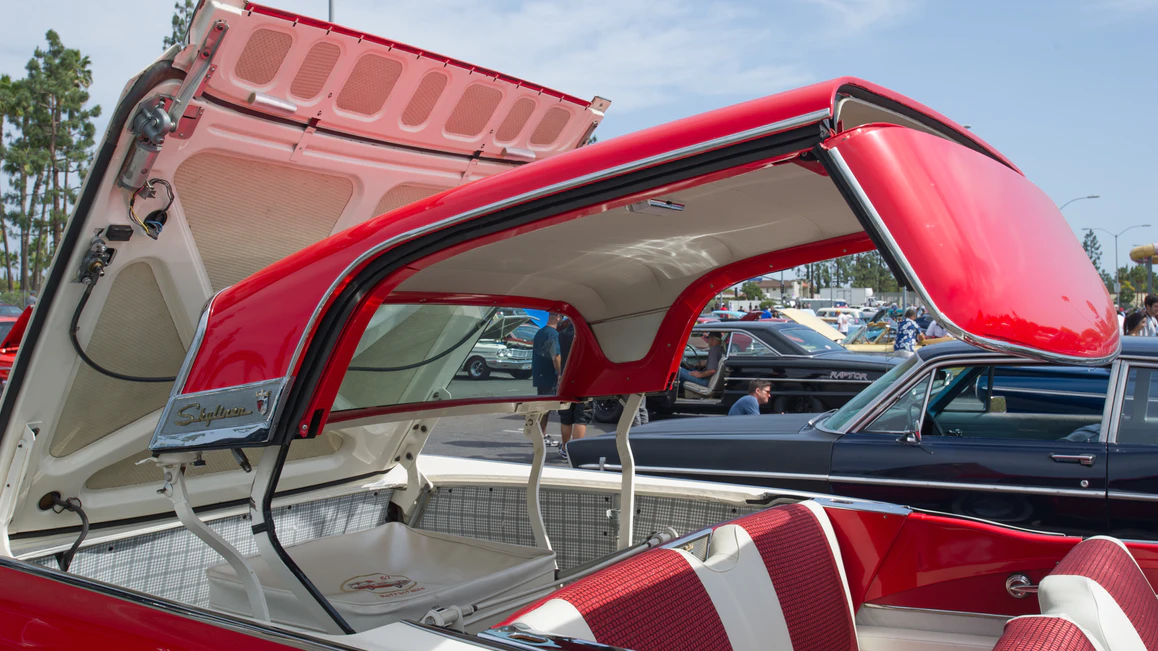 I​ncludes a VIDEO of the top in operation!

Earlier this month I had the pleasure of returning from the COVID shutdown to cover a major car show: “Fabulous Fords Forever.” As I have previously done at this event, I especially sought out one particular model of automobile to photograph: the 1957-59 Ford Fairlane 500 Skyliner retractable hardtop.

The Ford Skyliner is a beautiful, fascinating car. It exemplifies the automotive excesses of the 1950s, where bigger was most definitely perceived as better, and high style — especially in its two-tone color schemes — took precedence over aerodynamics and objective practicality. This was an aspirational car, technologically advanced for the time — especially for one particular feature.

I discovered a sales brochure for the 1957 Ford Skyliner in The Old Car Manual Project’s brochures’ section, at www.oldcarbrochures.com. This brochure featured especially colorful, laudatory and persuasive language — typical of that era. It began with this bold, matter-of-fact statement, and soared spectacularly from there: “The exciting new Ford Skyliner… World’s Only HIDE-AWAY HARDTOP.”

“Here’s the car the motoring public has dreamed of for years … the car many automotive experts said would never be mass-produced. Now, Ford has made this ‘miracle’ a reality. It’s another first from Ford, the company that brought you low-cost V-8 power and created such automotive classics as the Thunderbird!”

“The Skyliner represents the beginning of a new era in automotive design. This newest new kind of Ford introduces to the motoring public the most dramatic idea in automobile design since Ford presented the first 2-door sedan in 1915. And remember, the same patient research, planning and testing that went into the Skyliner, goes into every model of the new kind of Ford for 1957.”

“Just touch a button … in less than a minute the all-steel hardtop vanishes smoothly into the rear deck … and you’re sitting in the most exciting convertible under the sun! It’s literally two glamour cars in one … each a masterpiece of craftsmanship and distinction!”

“Designed to function with precision accuracy, the Skyliner’s automatic operating top has been cycle-tested, continuously without fail, enough times to equal ten years of normal service. The top-operating system is driven by seven specially designed, high-efficiency motors which are sealed and permanently lubricated. All are protected by circuit breakers.”

“The top operation is simplicity itself and completely automatic: first, after the dash control knob is pulled out to lower the top, the rear deck lid unlocks and rises to the ‘up’ position. Next, the top unlocks from the body and windshield header and begins to move upward and back. As the top moves, its forward section folds down and back to enable top to fit into trunk. The top continues its backward movement into the trunk. Here it comes to rest snugly on cushioning pads. Rear deck lid closes and locks itself tight. Entire sequence is reversed for converting back to hardtop. Transformation time is from 48 to 55 seconds.”

“Lovely to look at, the Skyliner is a full 3 inches longer than other Fairlane 500 models … already the longest cars in the low-price field! This additional length is evident in the longer, low-line silhouette of the rear deck area — a smooth expanse of metal that comes right up to the rear seat! There’s space galore to let you and your guests ride in comfort and luxury. And you’ll find distinctive touches in the details, too, with such refinements as special visors, curved to fit windshield and header, special Airweave vinyl interiors, and unique two-tone instrument panel.”

The Skyliner was quite well received, selling in the tens of thousands over the course of its three-year model run. Its name changed in the 1959 model year to Ford Fairlane 500 Galaxie Skyliner. Its complex retractable hardtop mechanism, which used electric motors as opposed to hydraulics, seems to have been reliable.

However, one very significant shortcoming of the car was a direct consequence of its unique retractable hardtop feature. This was a very long car, with a massive trunk. Yet, when its hardtop was retracted, that took up much of the trunk space, leaving room only for a relatively small, metal, box-like storage area in the middle. Ford sold custom-designed luggage to maximize use of what little trunk space there was.