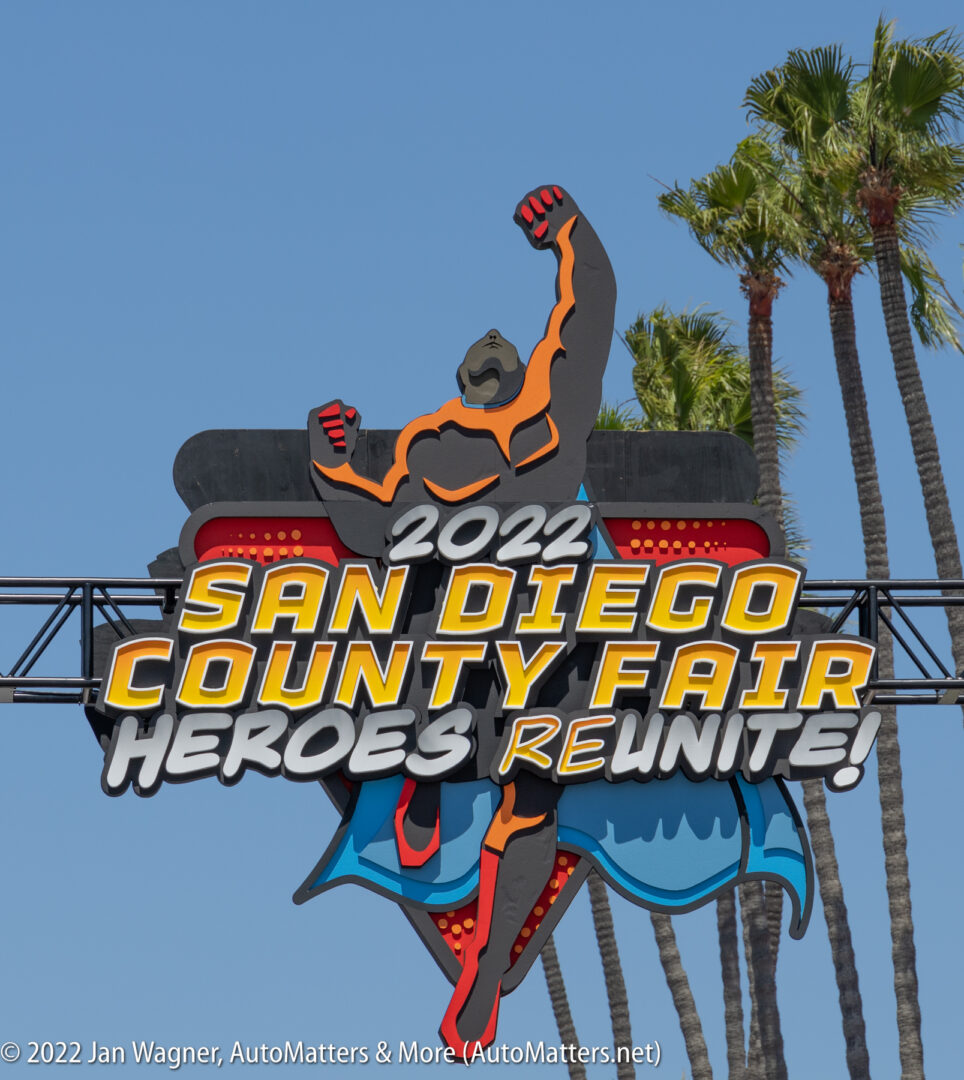 As we emerged from the worst of COVID-19, the San Diego County Fair returned to the Del Mar Fairgrounds. There was so much to see and do that it was truly impossible to take in everything in just one day.

My plan for my first day’s visit to the Fair was to scout the fairgrounds to get a thorough overview but I did not even manage to do that because, almost immediately, I learned that I’d arrived on a day filled with special activities in the Del Mar Arena.

… safety education — including a two-story, kid’s SAFETY HOUSE, complete with smoke effects, that taught kids what they should do in case of a fire in their home…

… a demonstration of a fire department extinguishing a vehicle fire…

… a vehicle extrication demonstration using the Jaws of Life…

… a parade of fire trucks, and more.

The highlight of the day’s entertainment for motorsports fans was an action-packed, crash-filled, DEMOLITION DERBY that benefitted the Burn Institute. Here is the link to the video on the “AutoMatters & More” YouTube channel:

Encinitas Fire Department paramedic and firefighter Donnie Butz won that (he’s the one in the red driving suit), after he and his fellow firefighters did some serious beating and banging with a sledgehammer on his 1976 Chrysler Cordoba, to ‘repair’ the crash damage suffered before the final round.

The theme of this year’s Fair was “HEROES REUNITE!” where superheroes were the stars. As they said, “You don’t need a cape to be a hero. This year, the 2022 San Diego County Fair honored Community Heroes, ordinary people who take extraordinary measures to make the world a better place. They are mentors, volunteers and do-gooders; veterans, nurses, first responders, doctors, teachers, caregivers and people just like YOU!” Their real-life stories, as told on the Community Heroes wall in the Hall of Heroes exhibit, were truly inspirational.

Also on display were pop culture superheroes from comic books (available for purchase) and the movies.

As you would expect in a County Fair, there were competitive exhibits galore. Most were made by individuals right here in our community. Their masterful, unique creations included woodworking, photography, fine art, collections, cakes and baked goods, flowers and gardens, and so much more.

Entertainment ranged from buskers roaming the Fair to star-studded, top-tier talent that included country’s Chris Young and Sam Hunt, rockers John Fogerty, the Goo Goo Dolls and Gabriel “Fluffy” Iglesias in the Toyota Summer Concert Series. Every night in The Paddock, Fair goers listened and danced to awesome tribute bands on-stage in the. The Albertsons/Vons Funville Stage hosted the best in community entertainment.

Of course, what would the San Diego County Fair be without the Swifty Swine Racing Pigs?! Yes, they were back in all of their glory, racing in front of packed grandstands.

Also making their return to the Fair were the popular Extreme Dogs.

Livestock included everything from “goats to guinea pigs” in the Chevy Livestock Barn.

There were plenty of opportunities for shopping at the Fair, with gadgets and gizmos, jewelry, apparel, kitchen utensils, tools, mattresses and hot tubs for sale, and more.

Over at the two Midways were a dazzling array of rides and games of chance.

Many happy Fairgoers could be seen carrying huge stuffed animals.

For the truly brave (or crazy), the Human Slingshot Experience was back. Needless to say, I most definitely did NOT try that! I limited my participation in that experience to taking pictures of it.

as you’ll see in this video on the “AutoMatters & More” YouTube Channel:

Last, but certainly not least, what would the Fair be without Fair food? There were choices galore to satisfy every taste and appetite.

My favorite choice for dinner was Eddie’s Asian Inspired Cuisine. I had the Orange Chicken and Beef Broccoli. It was delicious. Unfortunately, when I asked where their brick & mortar restaurant is, I think they said Fresno, which is far, far away.

In all the activity at the Fair, this mother duck found a secluded place to lay her eggs and take care of them — with a little help from Fair employees (duck food in the planter, with more food and water in the dishes down below). I wonder if they’ve hatched yet?