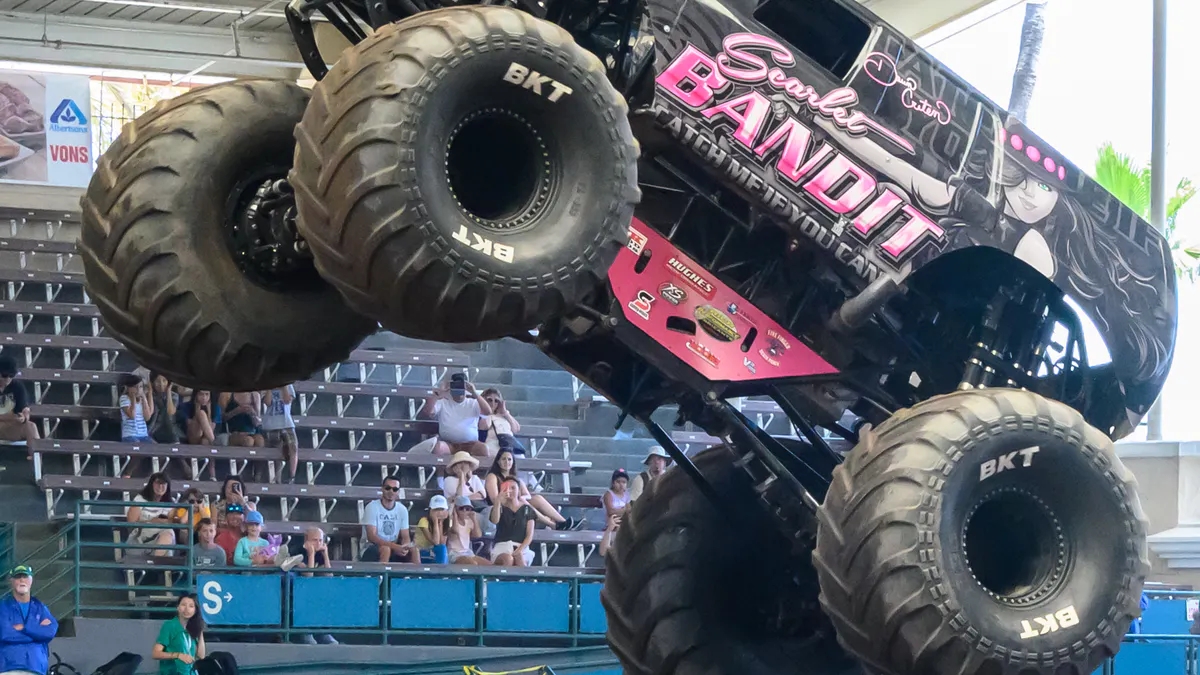 The theme of this year’s fair was author L. Frank Baum’s beloved 1900 tale called “The Wonderful Wizard of Oz.” I remember, as a child, watching the classic 1939 MGM movie musical “The Wizard of Oz” every year on television.

One of my favorite things to see and participate in is motorsports, and this year’s Fair did not disappoint. WGAS Motorsports (wgasmotorsports.com) returned with an awesome lineup of dirt track racing and thrilling competition. I got up close and took some photos and videos of the action.

Perhaps the most exciting moment was when one of the gigantic Monster Trucks launched up a steep dirt ramp like a rocket. As it reached for the rafters of the Del Mar Arena, it slowly rotated back just a little bit too much, and then came crashing down on its roof. Don’t worry, the driver walked away, but I was able to capture an awesome video which I will share with you.

There was much more to see and do at the Fair. I passed on the rides, but highlights for me included seeing the hilarious Impractical Jokers (stars of the TruTV show) on the grandstand show stage…

… renewing acquaintances with some farm animals…

… indulging in Fair food (leave your diet at home!)…

… and showing my loaner Miata in the annual “Car Shows at the Fair.”

Loaner, you ask? While very impatiently waiting for Mazda to release my new, very orange, 30th Anniversary Edition, 2019 MX-5 Miata from where it has been parked at the Port of San Diego for several weeks, I contacted Mazda and asked to review a Miata. They agreed and loaned me a MX-5 Miata Club RF (Retractable Fastback), which I proceeded to enter in the annual “Car Shows at the Fair,” along with other Miatas from the San Diego Miata Club, and Mustangs.

Over the years I’ve owned three Miatas. They were fun to drive and have active car clubs associated with them. Get-togethers and fun drives in the backcountry are frequent. Having autocrossed Miatas for years, I can confidently tell you that they are also very hard to break.

I’d sold my last Miata – a 2006 – in favor of a 412-hp, 6-speed manual, 2011 Mustang GT. That car was brutally powerful. Under hard acceleration, it exceeded speed limits in a heartbeat. Ultimately that is what made it less fun to drive for me than my Miatas.

Thanks in part to their less powerful but rev-happy engines, Miatas can safely be flogged hard without exceeding the speed limits, which greatly expands their fun factor.

Furthermore, Miatas handle like go-karts. They should, as they are not much larger! My Mustang has much more room for people and their stuff, but that extra size and weight, and the excess of power, are penalties on narrow, twisty backcountry roads – a place where Miatas are at home. In a Miata, I can drive aggressively, have lots of fun and yet remain safely within the speed limits.

Having now driven this new MX-5 Miata Club Sport RF for several days, I am beginning to appreciate the unique character of this fourth-generation (ND) model.

It includes a variety of useful safety features that my previous Miatas did not offer, including a backup camera and a warning system that alerts you when cars are in your blind spots on both sides.

I love the new Miata. Driving it is everything good that I remember about driving my previous Miatas. It is incredibly nimble and immediately responsive, which makes it fun to drive even at low speeds, like when I rushed to Costco for groceries before they closed for the weekend. My groceries required some careful repositioning, but fit in the trunk.