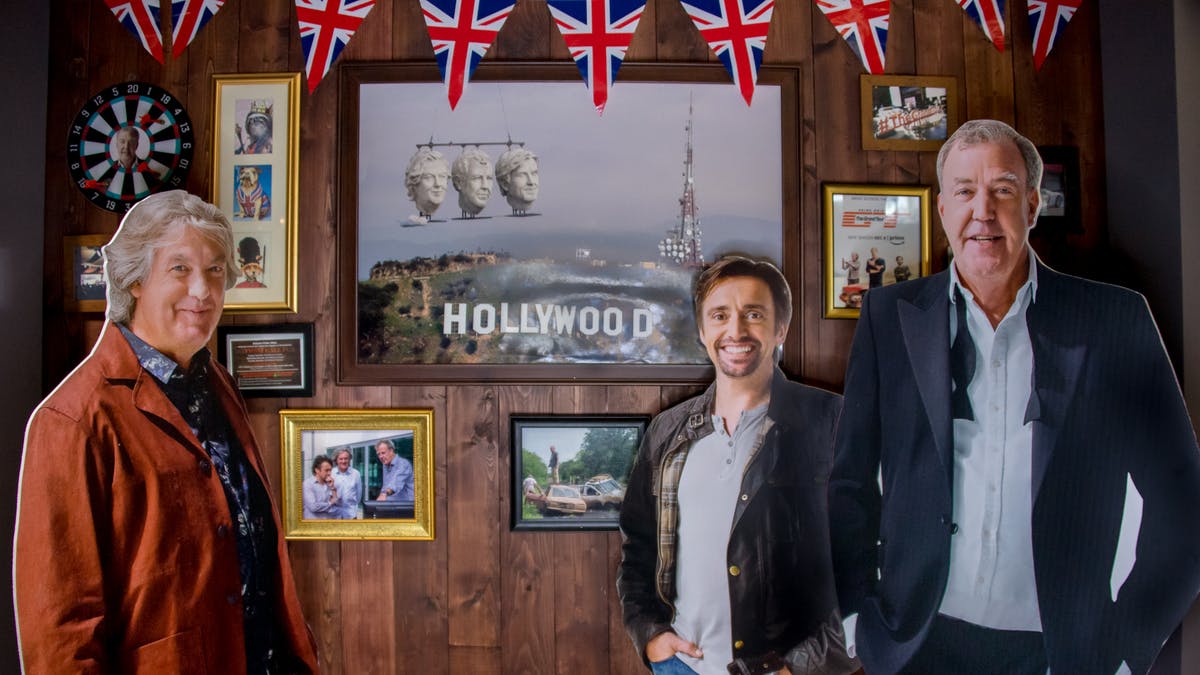 C​ardboard cutouts of James May, Richard Hammond and Jeremy Clarkson at the 2017 Los Angeles Auto Show

AutoMatters … and more, for the home & office

Ben was hired to photograph “Top Gear” in 2002. Initially locations were largely in the United Kingdom, but they expanded worldwide. The show “could go wherever there were cars and roads.”

When Clarkson, May and Hammond moved over to “The Grand Tour,” so did Ben Joiner. Worldwide locations have included Colombia, Croatia, South Africa, Vietnam, Azerbaijan and Mongolia. Ben tells us that “they often choose unlikely destinations away from the well-trodden paths of TV travelogues.”

To shoot “The Grand Tour,” Ben supervises a group of camera operators who have been with the show for a long time. That consistency of personnel is important to maintain the consistent, expansive, epic look of the show. They integrate the “hero” automobiles, boats or whatever Clarkson, May and Hammond are driving in a particular episode, along with their gags and jokes, and immerse the audience in the visual essence of the place and the people – what you might hope to see in a documentary or as a traveler to that place. “We’re always trying to relate the environment back to the story of the guys’ journey through it.”

For example, in the 2019 Madagascar episode, entitled “A Massive Hunt,” “The people were endlessly curious about us, particularly James’ car, which for some reason they just found hysterically funny. So we tried to capture kids laughing at this cartoon of mud and orange as the convoy rumbled by.” “You share a passing moment of humor, a joyful wave, or maybe even sorrow and empathy.”

In a shoot in Namibia, Hammond’s car broke down. “Suddenly, these women came out of the wild and started dancing around Richard.” “It’s a really funny and beautifully spontaneous scene.” As the producers always said, “We’ll just go somewhere and stuff will happen,” giving each episode a unique flavor.

Before they travel to a location, research is done to prepare for the conditions that they will encounter there. Sometimes the roads are little more than “a wide path beaten into a jungle,” with “long bruising days in the [back] of a Land Cruiser being thrown around by the rocks and nuts. There are days when you think we will never make it through there, or we will never get that vehicle unstuck.”

Episodes convey to us “a visceral sense of being and existing in that country,” further enriching our understanding of the world.

How many times have your plans been interrupted because, no matter how hard you worked at it, it took forever to clear your clogged toilet with a common plunger? (Important toilet tip: NEVER flush “flushable” wipes.)

CLOG BOSS® is a better plunger — a truly unique, hygienic and patented plunger that is easy to use, unlike those other plungers that we’ve all bought over the years (I own several — how about you?).

The reason why conventional toilet plungers do not work well is because much of the water pressure that you apply by plunging takes the path of least resistance, either going into the siphon jet of jetted toilets (the hole at the bottom of the toilet bowl that is opposite the toilet’s drain), sending dirty water up through the inside of the toilet to jets at the rim; it simply escapes around the slippery, typically very poor seal with your plunger where it contacts the bottom of the toilet bowl, splashing dirty water up and out of the toilet; or both. Therefore, much of the pressurized water is not directed into the toilet’s drain, where the stubborn clog likely is. Instead, your old-style plunger spreads a watery toilet plume containing harmful germs up into the air that you breathe, and onto surfaces.

The soft, unique, flexible foam tip of CLOG BOSS® fits deeply into the drain at the bottom of the toilet, creating a much more complete seal, thereby directing much of the pressurized water directly towards the clog.

(Complimentary product was provided for this uncompensated review)