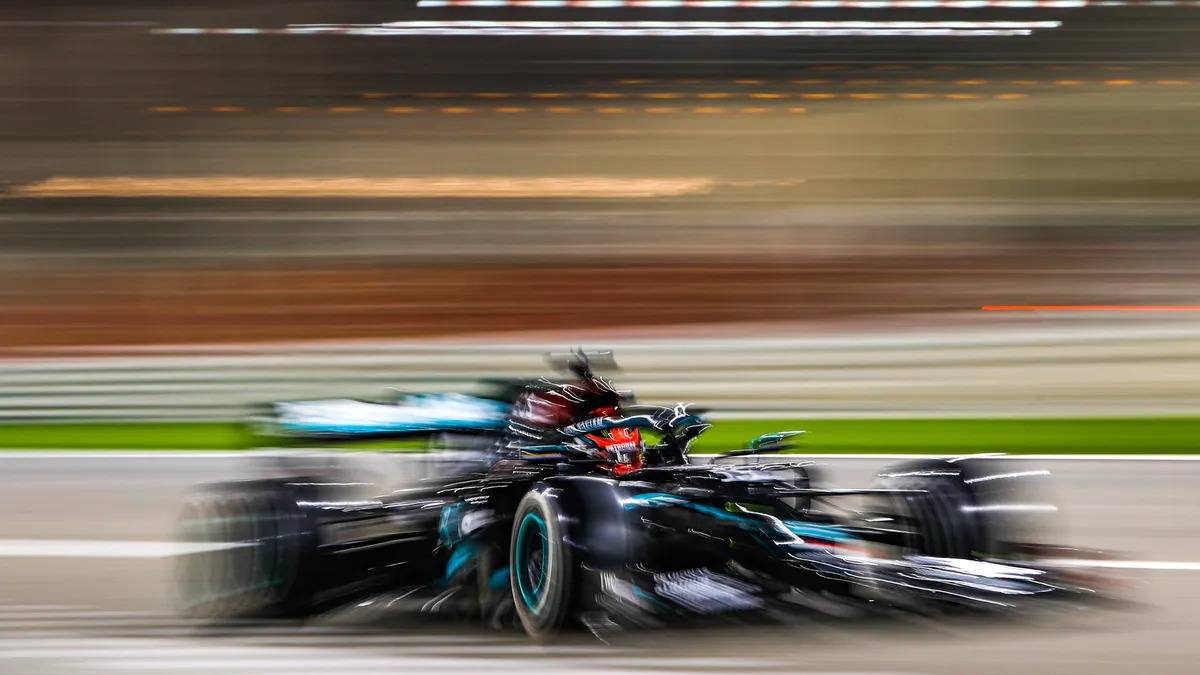 In a season impaired by the global, deadly coronavirus pandemic, George Russell’s Mercedes F1 debut at the 2020 Sakhir Grand Prix will surely be remembered as one of the best drives in Formula 1’s storied history, in what has surprisingly become one of its most memorable seasons ever.

Due to COVID-19, several F1 races were canceled and replaced — sometimes at tracks that were unfamiliar to drivers and uniquely challenging; Haas F1’s Romain Grosjean miraculously escaped from a horrific, fiery crash through a barricade at high speed that tore his car in half; and there were several last-minute driver and crew member replacements, due to positive COVID-19 tests. Only days before this race in Bahrain, 2020 F1 Champion Lewis Hamilton suffered that same fate, ending his 265-race streak of successive F1 Grand Prix starts.

At 2am on Tuesday, Mercedes F1’s team boss Toto Wolff gave British driver George Russell ‘the call,’ inviting him to drive Lewis’ Mercedes. In recent years, Russell had won the GP3 Championship (2017) and the FIA Formula 2 Championship (2018), but in two years as a Williams F1 driver George has languished out of the points due to an uncompetitive car. However, thanks to his exceptional driving skill, he has been wringing the best from that car, outqualifying his Williams teammate in every race.

At Mercedes, Russell would have to quickly learn how to drive a very different, championship-winning car, with barely any track time. Additionally, the Mercedes has minimal space in the cockpit, designed to just barely accommodate the physical size of its assigned driver. Russell is four inches taller than Hamilton and wears size 11 shoes. Since there would be insufficient time to change the car, Russell would somehow need to squeeze into it as is, uncomfortably wearing shoes a size too small.

Using his remarkable driving skill and Mercedes’ expert guidance, Russell got up to speed quickly. In Saturday qualifying, he was only 0.026 of a second behind Bottas, who has driven the Mercedes F1 car all season long — a huge competitive advantage over Russell.

Despite still being somewhat unfamiliar with the Mercedes (during the race he called on the radio for reminders about settings) and not fitting into it well (he hit his knees and scraped his knuckles), George’s driving was truly masterful from start to finish. In a race series where near-perfect standing starts are difficult to successfully accomplish by even the most experienced drivers, Russell — who began the race in the second position, had a brilliant, flawless start off-the-line.

He passed teammate Bottas by the first turn and quickly pulled out a significant lead, as Bottas struggled. Two of Russell’s other likely strong competitors — Ferrari’s Charles Leclerc and Red Bull’s Max Verstappen – crashed out of the race in the first lap.

Russell’s scheduled midrace pitstop for the mandatory tire change went well, and it looked like he was well on his way to potentially winning his first F1 race, but then disaster struck the Mercedes team with a “colossal (expletive deleted)-up,” according to Toto Wolff.

It began when rookie Jack Aitken — Russell’s temporary replacement driver at Williams — spun, losing a front wing. Collecting that wing necessitated the deployment of a Safety Car. With the field bunched up, Mercedes decided to double-pit both cars for fresh tires.

Russell led Bottas into the pits, had a typically Mercedes-quick pit stop, and returned to the track.

Bottas, however, was held for an eternity in the pits while chaos erupted over which tires to put on his car. Eventually, Bottas was released on the same used, hard tires with which he’d entered the pits.

Then Russell was immediately recalled to the pits for tires yet again when the team realized that it had accidentally fitted a mixed set of tires to Russell’s car. That is strictly forbidden by F1 rules.

When the race resumed Russell was several positions behind, but at least he had new, sticky tires. He drove brilliantly, decisively carving his way back into second position and poised to retake the lead, in time to still win the race.

Then, unbelievably, Russell had to return to the pits yet again to replace a punctured tire. Dejected, he nevertheless fought his way back to earn fastest lap of the race and a ninth-place finish, scoring his first points of the year, but that was a bittersweet end to his character-building drive of the race.

This much is certain: it is no longer if George Russell will become a Mercedes F1 driver, but when.

Posted in 2020, Formula One, Motorsport