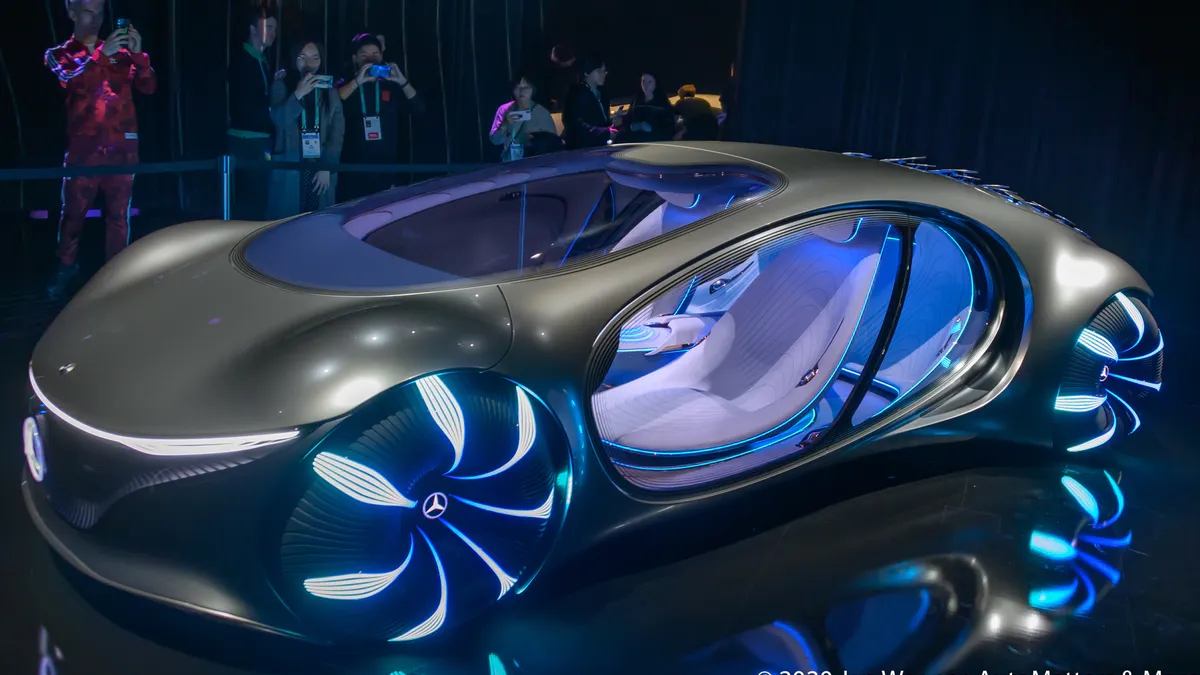 Increasingly, CES is becoming more and more of a major, must-see car show, but of course CES is much more than that. Unlike at dedicated car shows, there are also thousands of non-automotive products and technologies at CES, dispersed among many different venues spread out around Las Vegas, and exhibited within a frustratingly narrow time frame (only four days for the show plus perhaps a day or two leading up to CES). That makes it impossible to see more than a small fraction of what is exhibited.

Bring your most comfortable walking shoes to CES because the Las Vegas Convention Center is huge, encompassing several large buildings. Furthermore, a huge new addition to the LVCC is rapidly approaching completion.

Getting around the LVCC is like negotiating an enormous, crowded maze – often with major exhibits surrounded by extremely high exhibit walls, impossible to see over. You could easily be standing in one major exhibit and not realize that another that you want to visit is literally almost next door, because you cannot see it. That also makes it difficult to get your bearings, and easy to get lost.

Thankfully the first phase of a tunnel is currently being built by Elon Musk’s Boring Company under the existing buildings of the LVCC and the new addition. Riders will be transported in high-speed, autonomous vehicles. With its three stops, the twin-tunnel LVCC Loop, as it will be called, should drastically reduce the time that it takes to get from one end of the LVCC to the other, and to transportation hubs for transit to other major hotels’ convention centers.

The LVCC is just one of the major CES venues, which brings us to another impediment to seeing as much as possible. To get to another venue requires: waiting in a long line for the free shuttle buses; taking taxis or rideshare services, or driving yourself through eternally gridlocked Las Vegas traffic; walking the deceptively short distances between the sprawling Las Vegas Strip hotels; or taking the Las Vegas Monorail which stops far from The Las Vegas Strip, leaving you little choice but to walk slowly through crowded casinos just to get to the other hotels.

The challenge, therefore, is that you will not have time to explore all of the venues.

This year, especially with the change in dates for the North American International Auto Show (Detroit) to much later in the year (June 7 – 20, 2020), the world’s automakers are free to concentrate their efforts on – and bring their latest concept cars to – Las Vegas for CES. That is precisely what Mercedes-Benz did with their stunning, futuristic, Vision AVTR concept vehicle.

Intended to show “Sustainable Modern Luxury and the Next Chapter,” the Vision AVTR concept vehicle “connects human, machine and nature in an unprecedented way.” Developed in collaboration with the “AVATAR” team, it “embodies the vision of Mercedes-Benz designers, engineers and trend researchers for mobility in the distant future.”

The all-electric Vision AVTR features four-motor all-wheel-drive with intelligent and fully variable torque distribution, offering the possibility to drive the front and rear pairs of motors in opposite directions, enabling 30-degrees sideways movement.

On the rear are 33 movable, multi-directional, solar plates (“bionic flaps”) to power an array of so-called neuromorphic sensors, chips and other secondary components.

The holistic interior design creates an immersive interior space in which passengers connect with each other, the vehicle and the surrounding area in a unique way. Large areas are covered with a color-changing fabric inspired by the sea. The seats are covered in vegan, sustainable DINAMICA® leather microfiber fabric.

Biometric touch controls of the Vision AVTR interface with the driver when their hand is placed on the center console.

The Vision AVTR blends harmoniously with its environment – the fusion of human and nature with the help of technology.