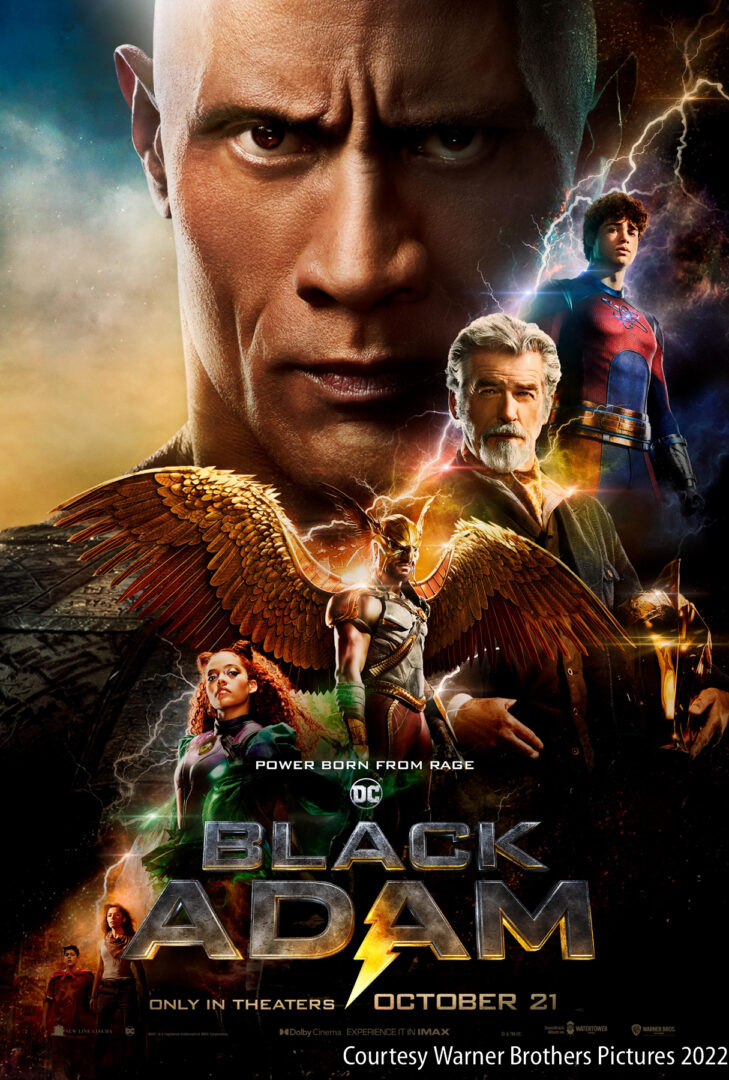 SPOILER ALERT: There are mild spoilers in this review.

There are so many super hero movies these days that it can be difficult to remember each one individually. Not so with Black Adam. This is a fresh, distinctly different take on the genre. It is wonderfully action-packed and entertaining, from start to finish, with a complex and carefully interwoven story, full of unexpected twists and turns.

The title character is convincingly portrayed by Dwayne Johnson, who also produced the film. He brings a certain charisma to the roles that he plays (“Jungle Cruise” comes to mind), and this film is no exception.

Black Adam’s story begins “before the pyramids,” when he is a slave named Teth Adam in the ancient, brutally oppressive, mythical kingdom of Kahndaq. Through a cruel twist, he became the reluctant recipient of enormous powers befitting a super hero, in order to save his people. Yet almost as quickly as he got those powers, he was entombed — until he was released 5,000 years later into the modern world.

A key word here is reluctant. He did not ask for any of this, and he would not neatly fit into the role of a super HERO — at least not in the traditional sense — and he makes no apologies for that. Everywhere he goes, he leaves a trail of death and destruction on a massive scale. He seems to care about no one and nothing, so just stay out of his way or suffer the consequences! Yet a mother and her son refuse to accept that.

Black Adam’s bad behavior goes squarely against the guiding principles of the members of the Justice Society: winged, powerful Hawkman…

… the clumsy but likeable Atom Smasher, who inherited his super suit from his Uncle Al, and who seems a little unsure about how it works…

Together, they travel from place to place in an awesome flying ship made from an indestructible, exotic material.

The members of the Justice Society repeatedly use their considerable, and unique, individual powers to try to reform Black Adam’s bad behavior, but advancing the cause of justice is their thing — not his. He sees them as a nuisance, to be dealt with and cast aside. The well-equipped, evil Intergang keeps getting in his way, too. The consequence of all that is pretty much non-stop mayhem, from beginning to end. This is a physically tiring movie to watch!

There are numerous lines uttered throughout the film that help to define Black Adam: “You can be the destroyer of this world…or you can be its Savior.” “The loose cannon needs to be locked down before innocent people start getting hurt.” “These powers are not a gift, but a curse, born out of rage.” “I’m not peaceful—nor do I surrender.”

Unfamiliar with the modern world, Black Adam — when asked, admitted that he does know what a door is for, so why does he almost never use one to enter or exit buildings, instead smashing through countless walls?

A WWE wrestling superstar (see https://www.wwe.com/superstars/the-rock), Dwayne “The Rock” Johnson keeps extremely fit. Unlike for other actors who play super heroes, the wardrobe department had to remove the padding from his costume.

He has been keenly interested in the Black Adam character in since he was very young.

There is a lot for you to unpack in this movie. It is like the “STAR WARS: Rise of the Resistance” attraction at Disneyland and Walt Disney World, in that there is so much going on at the same time that experiencing it just once is really not enough. Speaking of theme park attractions, Black Adam is so good that he deserves his own attraction in a theme park, just like Spider Man. Will that happen? Time will tell.

While this is the first feature film to feature Black Adam, it is likely not going to be the last. Tip: stick around for the credits.