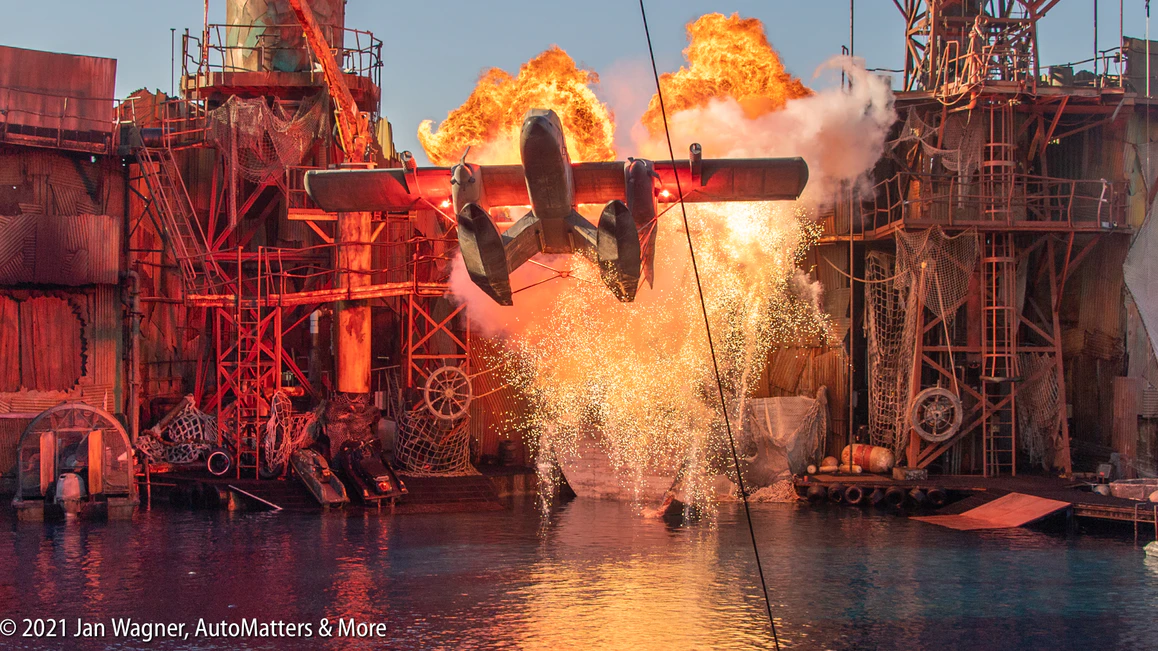 I love Universal Studios Hollywood but, due to its closure for COVID-19, I had not been there in a very long time. I jumped at the chance to return when I was invited to their summer Media Days. By the end of my wonderful, sunny day, I had taken almost 3,000 pictures throughout the park and Universal CityWalk, gotten soaked on “Jurassic World—The Ride,” barely escaped the shark from “Jaws” and was utterly exhausted.

There is so much to see and do, including elaborate themed rides…

… spectacular live shows including the fantastic, action-packed WaterWorld show, which has returned after COVID-19…

… and more, like the “Super Silly Fun Land” waterpark for the kids.

One day is simply not enough! Thankfully, Universal Studios Hollywood is still affordable, offering not only day tickets (for the best prices, buy them online) but also ANNUAL PASSES.

Originally, I was going to include Universal’s movie and TV cars in this column, but I discovered so many of them, and I have so many other cool things to write about right here, right now, that I have decided to dedicate an entire column to them. Watch this space in the near future…

Inspired by the films, “The Secret Life of Pets: Off the Leash!” is a new, family-friendly ride attraction that answers the question: “What are your pets really doing when you’re not at home?” To see for yourself, you will begin by walking through their New York City apartment building into their homes, and then take the ride — all while their humans are away.

With live action enabled by technologically-advanced animation and state-of-the-art projection mapping, 64 lovable characters interact with each other and you.

Minimize waiting in line by using their app-based Virtual Line technology — at no extra charge.

Get close to Blue, if you dare, at the Raptor Encounter.

Then intensify your Jurassic experience on “Jurassic World—The Ride.”

Prepare to get very wet — as I experienced first-hand while riding it three times! Spectacularly introduced in this 2019 online video, a rampaging Tyrannosaurus rex sends the terrified casts and crews of several film productions running for their lives through the Universal backlot and out the main entrance, as the dinosaur smashes through it in hot pursuit: youtu.be/FE5OXcYnHRE

The climax of the ride is a truly epic, animated battle between the huge, hyper-realistic Tyrannosaurus rex and Indominus rex that tower above you in the darkness (which I needed to shoot at 108,000 ISO!), just before you plunge down a giant waterfall in a desperate effort to escape! Sitting at the front, with my Nikon D5 wrapped in part of my poncho and only the end of its lens sticking out, I was thoroughly drenched by a wall of water.

PHOTOGRAPHY TIP: This photo shoot reminded me of something in photography that I’d forgotten over the long dry spell when I was not out taking pictures all the time, due to COVID-19. Even though using extremely high ISO settings on my camera will produce images of subjects that are photographed in near-dark conditions, those images will be EXTREMELY grainy — full of tiny, colored dots. To take photos of the dinosaurs in the dark at “Jurassic World—The Ride,” at relatively high shutter speeds in combination with using a small enough lens opening to get reasonable depth of field, I had to ride the ride three times (and got thoroughly drenched in the process of doing that), each time setting my camera at increasingly higher ISO numbers (108,000 and beyond!).

I could not see on my camera’s tiny monitor just how grainy my extremely low-light photos were while I was at Universal Studios Hollywood, but boy did I see the grain back in my office on a high resolution, large computer monitor! To get rid of those dots I used a feature in Adobe’s Lightroom called “Luminance Noise Reduction,” in combination with increasing the darkness of black areas. The result was surreal-looking, poorly defined, very softly-focused images. You might not recognize your own mother in photos that have had this done to the extreme. That might be suitable for surveillance pictures, where stealth is more important than publication-ready images, but the resultant pictures just do not meet my standards to share with you. It took ages for me to edit and finesse just a few of these photos.

Next time, I will shoot at much lower ISO settings, with wider apertures and slower shutter speeds, so that I can use lower ISO settings. The key will be for me to hold the camera very steady where the subject is not moving, or if the subject is moving, to try to match that speed of movement with my camera. Otherwise the images will be out of focus.

Minion Café is a new place to eat, adjacent to “Despicable Me: Minion Mayhem” and the “Super Silly Fun Land” waterpark.

A VERY SPECIAL ANNOUNCEMENT — MANY YEARS IN THE MAKING!

Since writing my first column about 20 years ago, I intended for “AutoMatters & More” to have its own website where you could see all of the columns (now over 700), complete with my extensive collection of photos — many of which are of people, places and events that are no longer with us.

I embarked upon this ambitious project long ago, carefully choosing a website building program that I thought was likely to be around for many years to come: Microsoft’s FrontPage. It was not a particularly easy or user-friendly program for me to learn, and the process to add each column was convoluted and complicated. It took months to accomplish but, eventually, I overcame these and other obstacles. My website went live, for all the world to see, at AutoMatters.net

My website gained in popularity and its rankings grew. I continued to write new columns and take more photos, adding them to the website. All was going well and as planned — until Microsoft discontinued FrontPage, along with the support necessary to enable it to work with new versions of computer operating systems. Microsoft had killed FrontPage, and with it my website.

Fast-forward to today. Here, in column #701, I am proud to officially announce my brand new “AutoMatters & More” WordPress website, live now at AutoMatters.net. Over 400 of my columns have already been uploaded to there, and more will be added.

To explore AutoMatters.net, simply type a topic in the website’s Search Bar, or click on one of the blue ‘years’ buttons below that Search Bar, at the bottom of the Home Page.