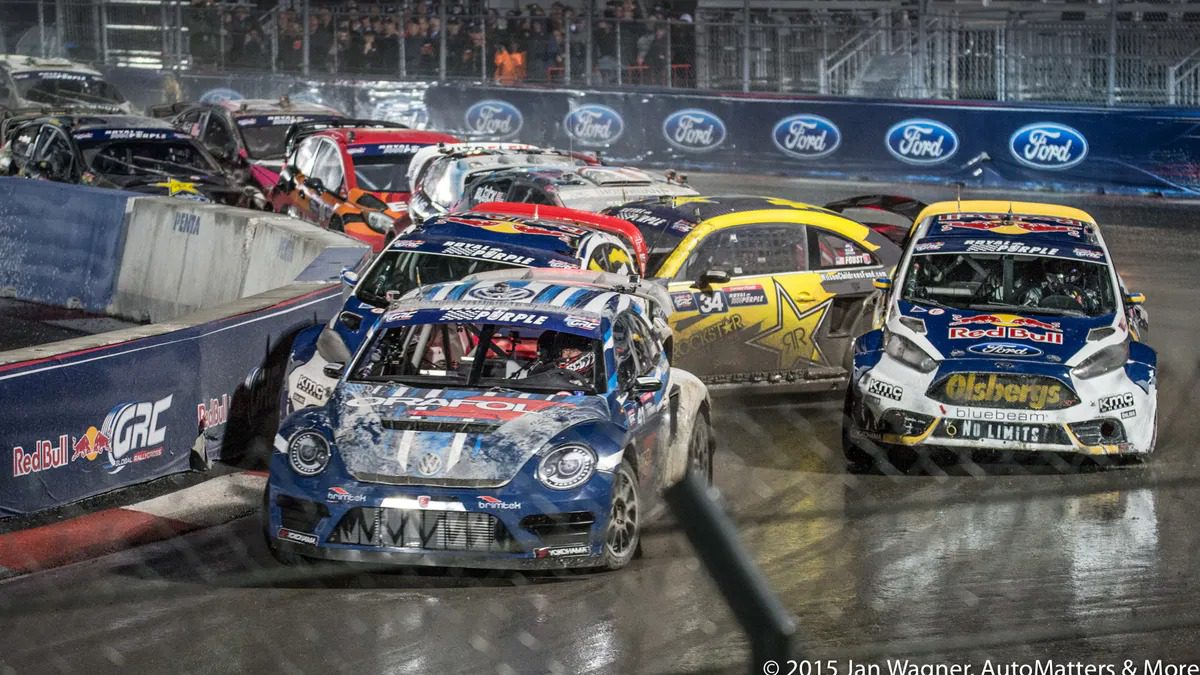 TANNER FOUST (YELLOW BEETLE) TAKES a WILD RIDE, with a little help from his friends.

Sometimes we luck into our once-in-a-lifetime events. They are even sweeter when we expect them to be routine and predictable – and then they are not.

Each year I travel to Las Vegas to cover the SEMA Show – an enormous automotive trade show that showcases products and services for the automotive aftermarket on countless customized vehicles. Major auto manufacturers feature their latest and greatest high performance models.

I used to go to the SEMA Show solely to cover the show itself, but eventually I could not resist the lure of the off-site, major motorsports events that take place the same week.

While there in 2015 I covered Robby Gordon’s Off-Road Stadium SUPER Trucks, the Optima Batteries Ultimate Street Car Challenge, Formula Drift at SEMA Ignited and last but certainly not least, the season finale of the Red Bull Global Rallycross series.

In Red Bull GRC, two classes of cars compete: Supercars and Lites. Each class runs heat races and a main event, guaranteeing plenty of exciting action for the fans, lap after lap.

Earlier in 2015 I covered both Los Angeles rounds of the Red Bull GRC. Located by the water on a beautiful Southern California weekend, it was very entertaining. The course, as usual, consisted mostly of pavement but also a dirt section, with a jump. Seeing compact, high-powered rally cars launch – sometimes side-by-side – and then soar through the air until they came crashing down on their front tires was thrilling. How could it get more exciting than that?

Las Vegas provided the answer, in the form of unusually stormy weather. Heading into the season finale on a large, purpose-built course across the street from the Luxor, only two drivers – Scott Speed and Tanner Foust – had a mathematical chance to win the championship. Scott was the odds-on favorite.

First it began to rain – hard. Then I started to feel something more solid than raindrops pelting my sun hat (which I’d kept on for much needed warmth, even though the sun was nowhere to be seen). I opened my palm and held it skyward. It quickly filled with hail. Without rain gear, I was getting soaked, as were my cameras. A plastic bag sort of protected one. Fortunately they are weather-sealed, professional Nikons. Then lightning came and the on-track action was abruptly halted.

An urgent announcement was broadcast over the loudspeakers: everyone had to immediately evacuate the facility. The grandstands and chalets were made of metal, so a lightning strike could have been disastrous. We were told that we could return if and when the lightning stopped. It was suggested that we take cover in our cars or a nearby hotel, and wait out the bad weather.

I joined the drenched fans as we streamed out of the gates (pun intended). I was about to walk to the nearest hotel when I realized that I was next to the pits. Despite the evacuate announcement, in various tents mechanics were working on mud-covered rally cars, repairing damage and fitting rain tires. Spectators were huddled together in the few covered spaces they could find.

Rather than join them, I thought that this was a golden opportunity to venture out and take photos. By that time I was soaked anyway, so it didn’t much matter if I got even wetter. I just hoped that I did not end up getting pneumonia again (for my third time).

Soon, however, the rain began again – in earnest. The dirt that had been limited to one section of the track had long since turned to mud, and in that liquid state it spread to the paved areas. Cars were slipping and sliding all over the track. Trailing rooster trails of water on the straights, they had become almost unrecognizable.

The action was spectacular so I remained outside and kept shooting.

For a racing recap – and to see more photos – go to www.redbullglobalrallycross.com, click on News, and then scroll way down to “Red Bull GRC Race Recap: Las Vegas.”