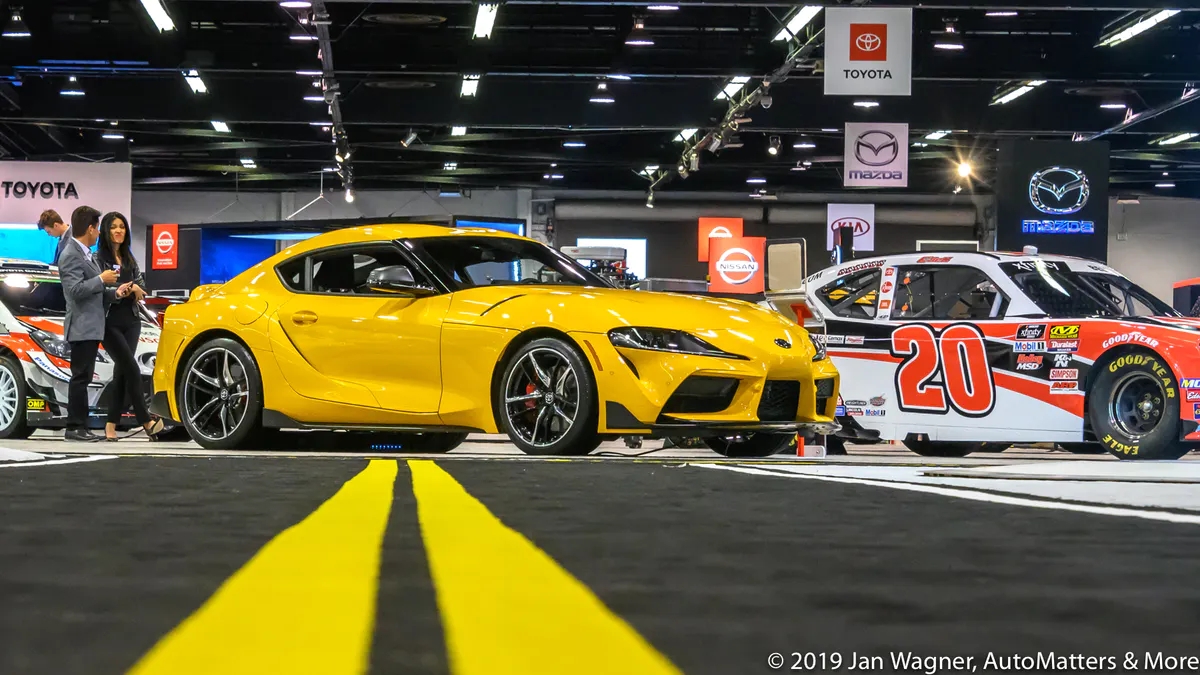 New this year, Electric Avenue presented by Southern California Edison educated and informed car buying customers about the benefits of owning an electric vehicle. Attendees had the opportunity to learn about electric vehicle technology, as well as how easy it is to make the switch to electric.

One of the especially convenient features of the Orange County Auto Show is its indoor departure area for several of the auto manufacturers’ test drives. These test drives on local Anaheim streets provided visitors to the show with opportunities to ride or drive in a variety of new vehicles, and ask questions of the auto manufacturers’ representatives who accompanied them. Unlike in a dealership sales experience, there was no sales pressure whatsoever. Auto manufacturers that provided vehicles for test drives included Acura, Chrysler, Fiat, Ford, Honda, Jaguar, Jeep, Land Rover, Nissan, Ram trucks, Toyota and Volkswagen.

Included with some were incentives that included Starbucks and Target gift cards.

An especially fun and demonstrative highlight of this car show was once again Camp Jeep, where passengers were taken for a thrilling off-road test track adventure that featured the iconic Jeep Mountain – an 18-foot, 35-degree hill climb. Other test track elements included three-wheeling over Camp Jeep’s Trail Rated Pass, and a stretch of terrain that simulated fallen logs. A collection of Jeep models to test on the track included the Jeep Gladiator, Wrangler Rubicon, Grand Cherokee Trailhawk, Renegade Trailhawk, Compass Trailhawk and Cherokee Trailhawk.

In addition to actual vehicles to test drive, there were fun-to-drive simulators in several auto manufacturers’ displays on the show floor. These included the Hyundai Racing Zone VRX Simulator and the Ford SIM-ZILLA Driving Simulator by Mannetron.

An Exotic Gallery showcased ultra-high-end vehicles from several manufacturers, including Aston Martin, Ferrari, Lamborghini, Maserati and McLaren. Usually the only other time most of us can ever see such vehicles is occasionally catching a glimpse of one as it drives by us on the street.

This show was family-friendly. New this year, a Subaru Loves Pets Pet Adoption Event took place inside the convention center at the Subaru exhibit, to help pets find forever homes. Adorable pups were available for adoption. In addition to the adoption opportunities, attendees were also invited to assemble rope toys for the local animal shelter or for their own pet, as well as create custom pet tags using the Subaru Loves Pets engraver.

Children were invited to participate in a Kids Scavenger Hunt in which they searched the show floor displays with a special pass to collect stamps from manufacturers. Once they collected all of the stamps, the kids could turn in their pass for a chance to win a grand prize. Also, kids could hop behind the wheel and test drive kids-sized electric cars on the OC Kids Test Track.

One thing that I looked for but that was missing from this year’s show was the opportunity to sign up for a free one-year subscription to Motor Trend Magazine.

The SoCal Work Truck Show returned to the Anaheim Convention Center, featuring more than 50 commercial work trucks and vans from top manufacturers including Chevrolet, Ford, Fuso, Hino, Isuzu, Mercedes-Benz and Ram. For everyone from contractors to plumbers, highly customized trucks designed to fit specific work needs were on display, along with manufacturers’ representatives who provided information and answered questions.