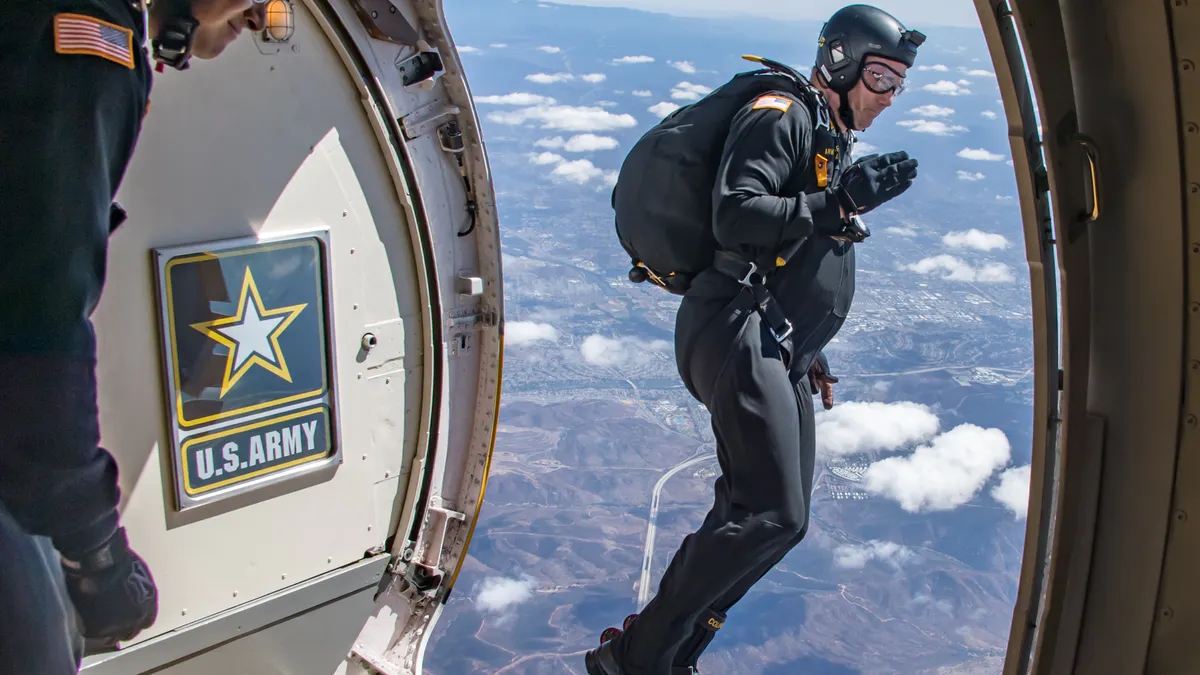 ALONG FOR THE RIDE WITH THE UNITED STATES ARMY GOLDEN KNIGHTS PARACHUTE TEAM – WITH VIDEO!

If we are fortunate, there may be especially wonderful things in our lives that we hope we will always remember. This past weekend I experienced one such bucket list item when I had the opportunity to ride along – at altitudes up to and likely exceeding 12,000 feet – with the United States Army Golden Knights Parachute Team, in celebration of their 60th year and while they were thrilling the large and enthusiastic crowds at San Diego’s 2019 Marine Corps Air Station Miramar Air Show.

While I was certainly not qualified (or willing!) to jump out of their perfectly good airplane with them, I think I did the next best thing, which I’d like to share with you through words, photos and – in my “tribe” on the DriveTribe website – through breathtaking video!

First, at www.goarmy.com/events/golden-knights, we learn about the team’s origins and accomplishments: In 1959, 19 Airborne Soldiers from various military units formed the Strategic Army Command Parachute Team (STRAC). Brigadier General Joseph Stilwell Jr. gathered the soldiers with the intent of competing in the relatively new sport of skydiving. Two years later that became the United States Army Parachute Team and, by 1962, the team earned the nickname the Golden Knights. Golden signified the gold medals the team had won while Knights alluded to the team’s ambition to conquer the skies.

Since then, the Golden Knights have conducted more than 16,000 shows in 50 states and 48 countries, reaching an average of 60,000 people per show. Team members have also broken 348 world records.

For the MCAS Miramar Air Show, the Golden Knights flew aboard their C-147A DASH8 transport aircraft.

Inside, fabric stretched across metal frames formed benches along both sides of the rear of the plane.

When we were airborne the cloud ceiling remained at only 1,200 feet – well below the FAA-mandated minimum of 2,000 feet – so they did not jump.

I asked and was given permission to return on Sunday, when the forecast was for much better weather.

On Sunday – the final day of this year’s air show – the weather was picture perfect: blue sky with a few puffy, white clouds. There were two performances of the Golden Knights that same day. I photographed the first one from the ground.

Soon it was time for the second flight.

They put on their gear in the plane.

I sat next to the open doorway, where they securely belted me in and told me not to touch the seatbelt. Even my camera was tethered. Nothing was to be allowed to leave the plane under any circumstances. I was offered an airsickness bag, which I took. Oxygen was available in case of hypoxia. The Crew Chief would remain on the plane, in case we needed help.

Earlier they had told us that it was going to be very, very cold at our maximum altitude, and they recommended that we wear a jacket. I’m glad that I did, because after only a few minutes at our maximum altitude my fingers were turning numb. They offered me gloves to wear, but I needed maximum mobility in my fingers to operate my Nikon D5’s small controls. Bear in mind that it was sunny and warm down below in San Diego.

First, one of the skydivers dropped batons with colored flags over the drop zone. Those would tell them where the winds would carry them.

When it came time to go, they jumped in several groups. It was truly thrilling to watch them jump out of their airplane and almost instantly disappear from view.

Here is a VIDEO of the U.S. Army’s Golden Knights parachute team jumping over the MCAS Miramar Air Show in San Diego, taken by Jan from INSIDE their PLANE:

Upon our return to the Miramar Air Show, we flew along the runway and saluted the crowds.

I would like to take this opportunity to sincerely thank the Golden Knights, and the men and women who brought us the MCAS Miramar Air Show, for this incredible experience, and for representing the United States with great courage and distinction around the world.

To read and see more about the United States Army Golden Knights Parachute Team, and to learn about their upcoming schedule of events, visit: www.goarmy.com/events/golden-knights.