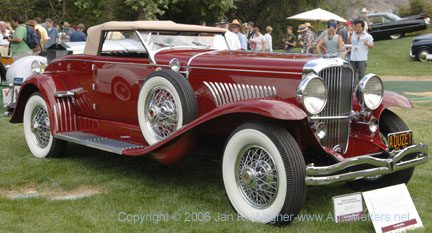 Some of the world’s most talented and successful auto designers received training at Pasadena’s Art Center College of Design. Therefore it is fitting that a car show is held there each year. I have been fortunate to have attended several consecutive shows. Once again the weather was beautiful, although it was very, very hot.

The theme of this year’s show was “Coachbuilding – Pasadena and Beyond.” In the morning, a panel discussed “The Past, Present and Future of Coachbuilding.” Then, in the afternoon, Patrick le Quément – Senior Vice President of Corporate Design for the French automaker Renault, presented the keynote address. Patrick provided commentary as we were shown a pictorial history that included Renault automobiles and designers, and then he answered questions from the audience. We laughed when, in response to his tongue-in-cheek request that we ask our questions of him in French, a young woman in front of me actually started to do so.

Of particular interest to me was Patrick’s disappointing, negative answer regarding the possibility of Renault returning to the U.S. market anytime in the near future. I like the styling of some Renaults and their technological prowess seems to be state-of-the-art. A Renault was driven to a dominant victory in last year’s Formula 1 World Championship and they are leading in this year’s series too. I think that Renaults could do well here.

One of my favorite cars of all time is the Renault 5 Turbo 2 – an example of which was on display in the show. As I recall, it was available here for sale in federalized form through a company named Sun International. To this day I wish I had swallowed hard and bought one. Of course since my track record for keeping cars is dismal, even if I had somehow managed to scrape together the money to buy one I probably would not still have it today.

The stars of the show were the cars on display outside the school’s buildings. Since they were not roped off, we could examine them closely and take unobstructed photos of cars with such revered names as Alfa Romeo, Bugatti, Cadillac, Duesenberg, Ferrari, Maserati, Mercedes-Benz, Stutz, Porsche and Packard. Representing a wide cross section of automotive types and vintages, the cars chosen for the show were simply breathtaking. It was like touring an outdoor museum.

It seems like every year Jay Leno is there looking around just like the rest of us. This year was no exception.

Mitsubishi presented their “Concept-CT” design study, which is a product of their California design studio. There to answer questions were Mark S. Kim, designer of its exterior, and Robert Burns, who designed its interior. I probably spent close to half an hour picking their brains about car design, racing and other automotive subjects. They are car people through and through. I would have spent much more time there if there was not so much more to see.

What is especially promising about this car, aside from its knockout athletic styling, is its use of electric motors in each of its wheels. It’s a hybrid! Not only does this car have the potential to be a blast to drive, but it would be miserly with fossil fuel too. I hope that this hot hatchback makes it to production. I can already picture the Mitsubishi TV commercials.

One great thing about a car show being held on the campus of the world famous Art Center College of Design is that visitors get an opportunity to tour the studios and labs on campus. In addition to watching students at work, I spoke with several members of the faculty and was impressed with their combination of knowledge and obvious interest in discussing whatever I asked them about auto design. If I had my life to live over again I would seriously consider applying to this school.