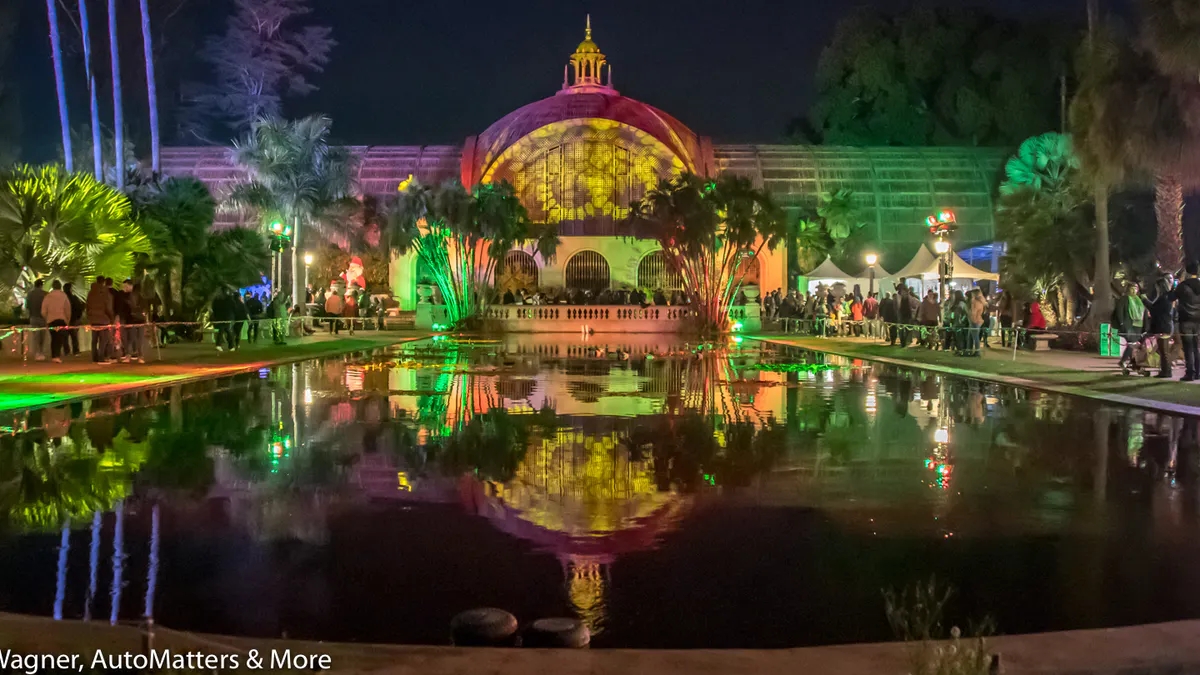 Balboa Park is a San Diego treasure and a United States National Historic Landmark. In 1915 it was the site of the Panama-California Exposition.

Today visitors enjoy its lush, beautiful grounds, featuring an incredible variety of vegetation. More than 17 museums celebrate the arts, aviation and aerospace, photography, trains, botany, archaeology, automobiles, history, science, technology and much more, stretching from the San Diego Air & Space museum, past the International Cottages and the Spreckels Organ Pavilion, over to the Plaza de Panama, along the El Prado past the Botanical Garden, around the iconic Bea Evenson Fountain (which is in front of the Fleet Science Center), over to the Spanish Village Art Center and all the way to the world famous San Diego Zoo. Whew!

Imagine, then, what an absolute treat it is to enjoy Balboa Park, including many of its museums with free general admission, during a park-wide festival for two incredible days on the first weekend every December. 2018 marked the 41st “December Nights” – an international, multicultural celebration of the holiday season.

Those who have been to December Nights know that many of the feature performances return to entertain audiences year after year. My favorites include the San Diego Civic Youth Ballet’s breathtaking performance of excerpts from “The Nutcracker.” For me, that alone would merit a trip to Balboa Park, and yet that is just a tiny sliver of all there is to see and do.

Oh, and I must add that there are some things at December Nights that are normally not found in the park, including a large midway with rides and carnival games…

… and foods from around the world. Of these, my favorite is the authentic paella, carefully prepared in large pans and served by the House of Spain – one of several international houses on the grounds of Balboa Park.

Two days is not nearly enough time to see and do everything, so I try to do my must-sees first – including “The Nutcracker,” and then I just stroll through the park, stopping wherever and whenever something captures my attention.

This year I was attracted to the sounds of Scottish bagpipes and drums emanating from the vicinity of the international cottages. Those sounds kept getting louder and louder, until soon I realized that the musicians were on their way to their performance at the nearby Spreckels Organ Pavilion.

I followed them in and found a seat near the front.

The Spreckels Organ Pavilion is where visitors can listen to music played on the largest outdoor organ in the world, which contains more than 5,000 pipes. On December Nights a gigantic, lit Christmas tree shares the stage with that organ, and various performers take the stage in front of them.

The music of the House of Scotland Pipe Band’s bagpipes and Scottish drums were projected powerfully forward. Several of their songs accompanied performances by Beret Dernbach, the 2018 winner of the Juvenile Division of the World Highland Dancing Championship at the Cowal Highland Gathering in Dunoon, Scotland – the largest, most spectacular Highland games, dating back to 1894 (visit www.cowalgathering.com).

The band practices in the park every Monday night.

The Del Cerro Baptist Choir continued a 35-year tradition with their performance of “The Christmas Story Tree,” narrating the biblical story of Christmas through song and ‘still’ dramatic scenes, revealed on a stage within the tree in the Organ Pavilion.

The Fleet Science Center presented multiple hands-on science demonstrations and live science shows, including one about electricity that made people’s hair stand on end!

The Bon Temps Social Club presentation of music to dance and listen to, on the “Gator by the Bay” stage in the Plaza de Panama, was like Mardi Gras in Louisiana, complete with bead necklaces being tossed out to the revelers.

As always, I look forward to reading your comments.