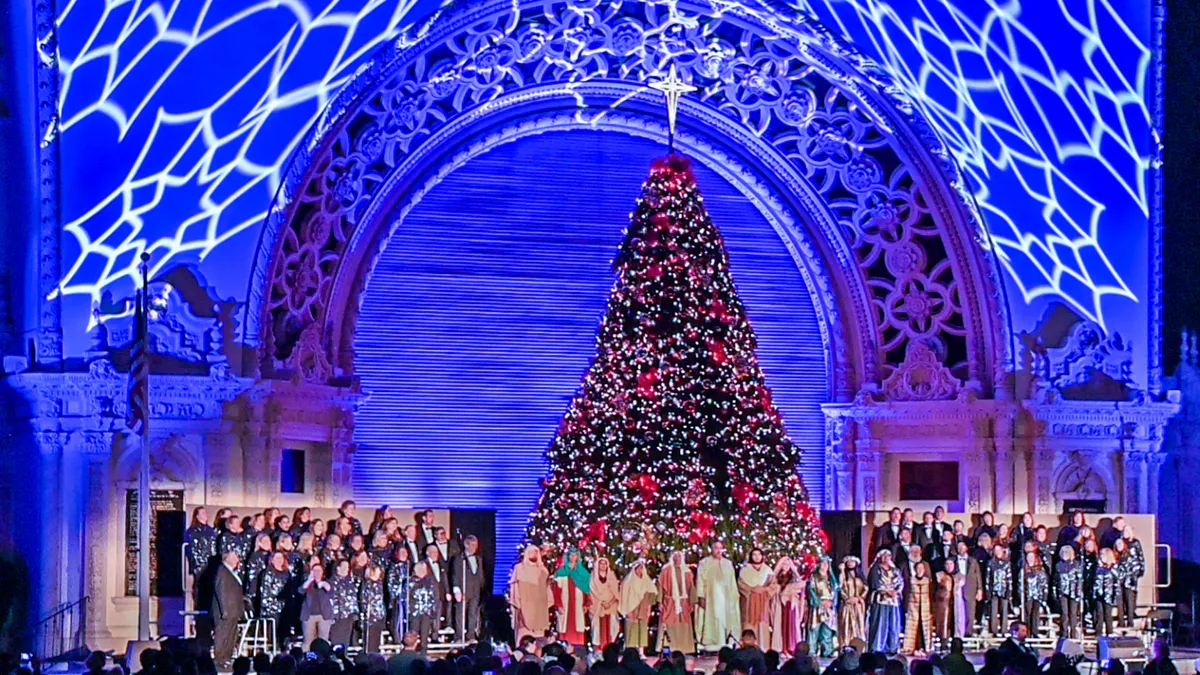 This holiday season kicks into high gear with Thanksgiving, along with Black Friday and Cyber Monday sales, holiday music most everywhere you go, ice skating and playing in the snow – even in balmy San Diego. Houses are decked out in bright, colorful, sparkling lights, as are themed boats in weekend parades in San Diego Bay. This is a time of year especially enjoyed with family and friends.

In San Diego one of most highly anticipated events of the holiday season takes place on the first Friday and Saturday of December. It is the annual “December Nights” celebration in Balboa Park – one of the largest free holiday festivals in the United States. It could only happen with the widespread participation of cultural groups, young people, musicians and others from all over San Diego County.

Think of “December Nights” as a gigantic, holiday-themed open house. This year more than 350,000 people enjoyed the food, fun, entertainment and beauty throughout Balboa Park.

There always is way more to see and do than can possibly be experienced in person, let alone shared here for you, but these are a few highlights from the two-day event.

There were visits and photos with Santa Claus…

… “taiko” drumming from Japan, singing and dancing by the JCompany youth theater, and much more.

For more than 35 years the “Christmas Story” has been told with narration, church choirs and an orchestra in the Organ Pavilion. At the center of its stage sat a gigantic, 33-foot tall, brightly lit Christmas tree which opened up to reveal dramatic recreations of the story of the birth of Jesus in Bethlehem, over 2000 years ago. Afterwards the audience was led in a rousing singalong of popular Christmas carols.

There was even a carnival midway with rides and games!

Another must-see event is the annual performance of excerpts from “The Nutcracker,” performed by the San Diego Civic Youth Ballet in the spacious Casa del Prado Theater.

Live music and choreographed dancing were performed on stages setup throughout Balboa Park. Especially entertaining was “Theo (Bellow) and Zydeco Patrol.” They wrapped up Saturday’s performances on the Bon Temps Social Club Stage with lively, high-energy dance music reminiscent of Mardi Gras in New Orleans, some of which I captured on video.

Representing the House of Sweden, children clad in white, full-length gowns wound their way through the International Cottages in the traditional Santa Lucia Procession. Then, after reaching the stage, they sang traditional Swedish Christmas songs.

The museums opened their doors free of charge from 5 p.m. to 9 p.m. Inside they had holiday entertainment, special exhibits, treats, arts & crafts, and more.

Even though it is not yet open to the public on a regular basis throughout the year, the Comic-Con Museum did open for this very special occasion with pop culture-themed interactive activities…

… an amazing art exhibit with works from the famous artist Shag…

… treats and movies. One could easily have spent several hours in this museum alone.

The Fleet Science Center always gets into the spirit of the holidays, with the tone well set by its very hands-on President & CEO, Dr. Steven Snyder. He was dressed in a green suit covered in Christmas decorations!

Balboa Park’s international houses go all-out, preparing foods that are associated with their home countries. One of my favorites is paella, cooked up fresh in huge pans by members of the House of Spain.