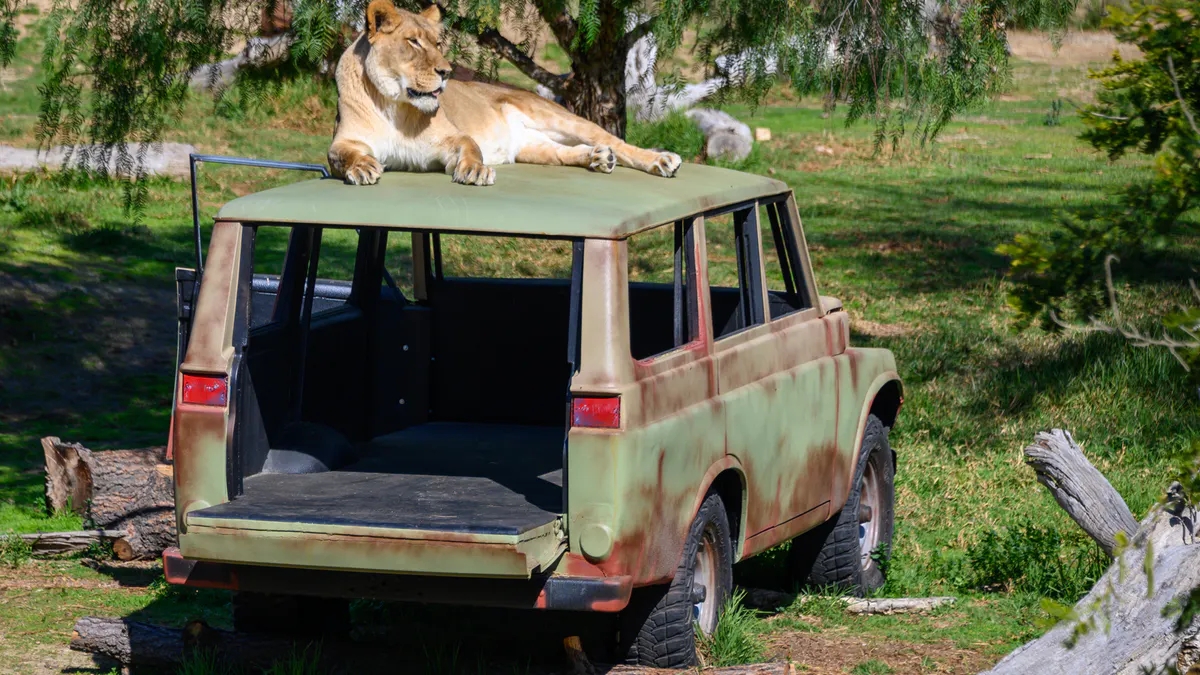 GOING ON SAFARI AT THE SAN DIEGO ZOO & SAFARI PARK

With lots of pictures and TWO VIDEOS! See a cheetah approach 70mph!

The Zoo traces its beginnings all the way back to 1916, with animals left behind from the 1915-1916 Panama-California Exposition. The Zoo’s first elephants – Empress and Queenie – arrived in 1923, when Dr. Harry and the head keeper rode them from the train station to the Zoo.

The Zoo’s official publication, “ZOONOOZ,” was first published in 1926, featuring Caesar the bear.

In 1927 the predecessors of today’s Zoo tour busses made their first appearance, bringing schoolchildren to the Zoo for field trips. The busses were then used on weekends for the first tours. In the same year, Belle Benchley became the Zoo’s director – the first woman to run a large public zoo.

The Reptile House, which still stands today, was added in 1936.

As World War II approached, Puddles the hippo provided a welcome respite from the increasing tensions. During the same period, the Zoo’s first two giraffes were driven cross-county from New York, making headlines along the way.

During the war, while the Zoo was short-staffed, Georgia Dittoe became one of the first female zookeepers. Admission to the Zoo – a popular place to visit for off-duty military personnel – was just 25 cents (plus 5 cents tax!). Military personnel would also bring or ship animals to the Zoo.

The Zoo experienced a significant period of growth after the war ended. Three young gorillas arrived in 1949, followed in 1951 by King Tut – a cockatoo that became the Zoo’s official greeter, saying “hello” to guests. The Zoo received four koalas and Sally, the Zoo’s first rhinoceros, in 1952. In 1955, San Diego’s KFMB-TV began broadcasting “Zoorama,” a weekly television program from the Zoo.

Koalas have called the San Diego Zoo home for many years. In 1960, the first koala born outside of Australia was born here. Her name was Vicki. In 2013 the Zoo’s Australian Outback, home for a colony of 24 koalas, opened.

Today the Zoo is renowned for its exhibits that represent particular habitats and parts of the world, but in 1962 the giraffes’ new home at the Zoo – a large, moated exhibit on Large Mammal Mesa – was considered a daring design.

The first gorilla was born at the Zoo in 1965 – only the seventh gorilla born at a zoo anywhere.

The Skyfari, currently under renovation, opened in 1969, offering guests a ride high above the Zoo.

Designer Chuck Faust had traveled to Africa to sketch buildings for that park. Safari Park is many times larger than the Zoo, providing much more room for the animals to roam, and for visitors to experience them in more spacious environments.

The Center for Reproduction of Endangered Species opened in 1975. It included the Frozen Zoo to preserve cell lines, gametes and DNA from animal species.

In 1997, Heart of Africa opened at the Wild Animal Park.

As you can witness at the Safari Park’s daily “Cheetah Run,” these amazing animals can accelerate from 0-60mph in 3.4 seconds, and 0-40mph in just three steps, reaching top speeds as high as 70mph!

One of the San Diego Zoo & Safari Park’s goals is to save endangered species. In 1987, the last California condor known to be living in the wild was brought to the Wild Animal Park.

The Zoo’s first panda cub was born in 1999. Hua Mei was the first surviving panda cub born in North America.

A herd of seven African elephants, saved from culling in Swaziland, were brought to the Wild Animal Park in 2003, and in 2009 the expansive Elephant Odyssey opened at the Zoo.

In addition to animals, the parks have abundant and varied plant life. The rainforests cover less than 7% of the world’s surface, yet they are home to more than 50% of the animal and plant species. Many of those plants are on the endangered species list.