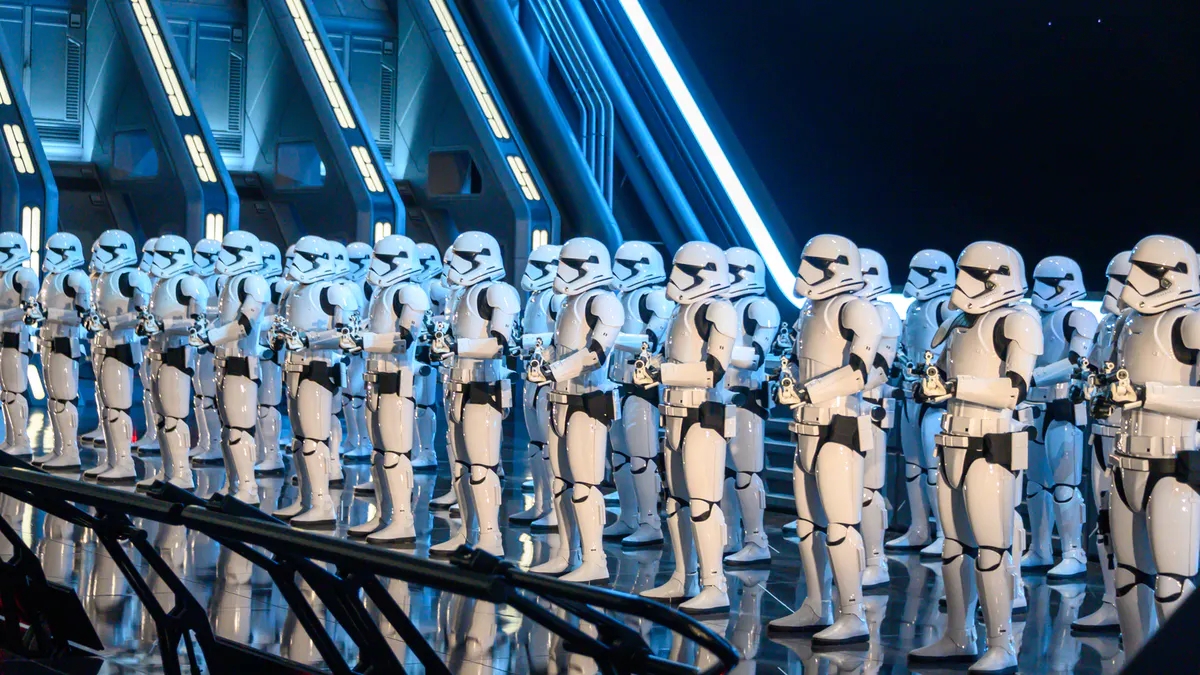 It has been years since the first plans were drawn up and construction began, but now Star Wars: Galaxy’s Edge is complete and open at Disneyland Park in Southern California.

This is an entirely new land set on an imaginary planet named Batuu, in a galaxy far, far way – all of which is inspired by the immensely popular Star Wars saga.

The attention to detail is exquisite, resulting in an exceptionally immersive experience.

Here you will find the First Order and the Resistance, as well as scoundrels, rogues and smugglers. Together they all interact in the Black Spire Outpost settlement, as the First Order continues its efforts to eliminate the last stubborn traces of the Resistance. Familiar Star Wars characters, including stormtroopers, Chewbacca, locals and assorted travelers, walk about and behave fully in character in their interactions with park guests.

Try the Milk Stand’s blue or green milk – like Luke Skywalker drank in the Star Wars movies. Observe as an alien chef rotates meat on a spit, as flames from a converted rocket engine broils it. Dine at Ronto Roasters, Docking Bay 7 Food and Cargo or Kat Saka’s Kettle. Sip on a beverage while you enjoy the Star Wars themed entertainment at Oga’s Cantina.

Be aware that Disneyland does not permit guests 14 years of age and older to wear costumes, but “bounding” is permitted. In “bounding,” park guests wear more typical, everyday clothing that is still somewhat suggestive of, but not the same as, actual character costumes. A similar color palate and materials can add to the overall effect. Military-looking attire – including helmets and weapons (other than lightsabers), robes, masks and full character costumes – even if sold within the park – may not be worn.

But that’s okay. What you are wearing should be far from your mind when you are enlisted to fill in as an active, participatory member of the six-person crew of the Millennium Falcon.

The single riders’ line is shorter and quicker, but it bypasses the regular line with its treasure trove of Star Wars props and memorabilia, and panoramic views looking out above Black Spire Outpost.

In “Millennium Falcon: Smugglers Run,” each of the six crew members will be assigned a vital, interactive responsibility: two are pilots, two are gunners and two are engineers. As you manipulate your ship’s control levers or its colorfully lit array of buttons, the ship moves and weapons fire accordingly. Jumping to lightspeed is thrilling!

S​TAR WARS: RISE OF THE RESISTANCE

Without a doubt, the best, utterly awe-inspiring attraction is the one that opened most recently: “Rise of the Resistance.” Here, as a recruit on a Resistance Mission, you will walk and ride through massive sets, one of which contains gigantic AT-ATs. Captured, you will be taken through a massive First Order Star Destroyer bay filled with legions of stormtroopers, as you are escorted to a dark, ominous holding cell. High above, as armed First Order guards stand by, Kylo Ren will announce your fate, but then – just when all hope seems lost – you are broken out of captivity and you try to escape. It is an amazing adventure that you will want to relive again and again.

However, experiencing this even once per day will be difficult to achieve in the foreseeable future. As had been anticipated, and experienced at the Walt Disney World version of this attraction in Florida, demand far exceeds capacity. This is especially disappointing, considering Disneyland’s substantial annual admission price increases.

To avoid day-long waiting lines that would meander through the land, Disneyland implemented a virtual queue system, whereby you will need to sign up on the Disneyland app or at a designated Fastpass location for a boarding group – but only after you are scanned into Disneyland Park. When I went, all boarding groups for the entire day were filled almost immediately after the park opened. Luckily, I did get a boarding group number. Many from my group did not.