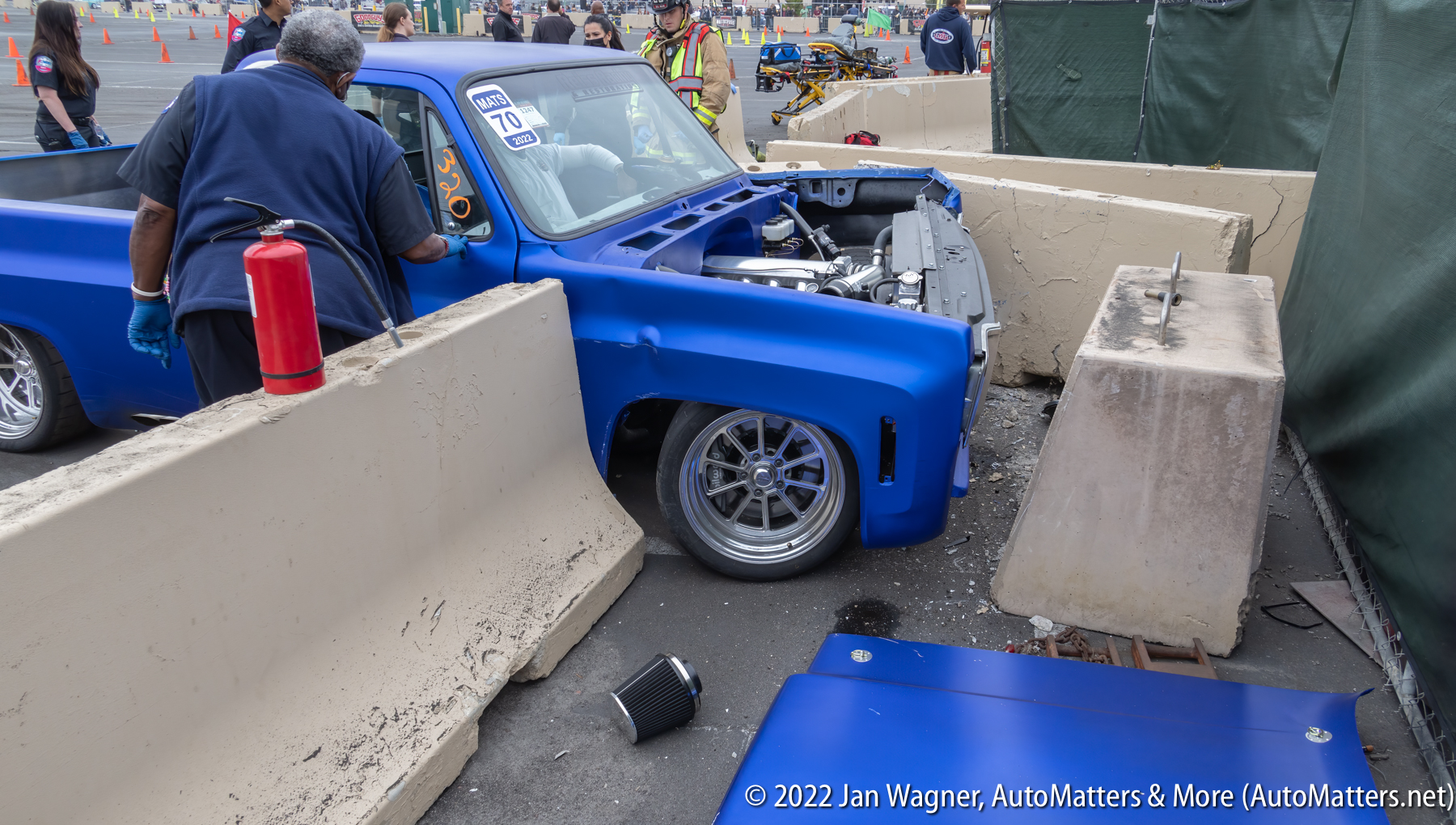 Goodguys Del Mar Nationals, Part One — The Autocross: Slow Down to Go Fast (ends with a crash, captured on video)

There is a simple, time-tested adage in motorsports, as in life, that basically says ‘Slow down to go fast.’ Those of us who have competed in motorsports know this well. Try to drive too fast and your vehicle will, eventually, break traction and go slower than it otherwise might — sometimes with the potential for devastating consequences, as happened at the 2022 Goodguys Del Mar Nationals autocross.

Goodguys is a Rod & Custom Association, but the 2022 Meguiar’s Del Mar Nationals — billed as “America’s Favorite Car Show,” was, as always, much more than just a rods and customs show. Additionally, there were American muscle cars…

… vendors and exhibitors (too many to count)…

This year, due to a conflict in my schedule to cover another major event (WonderCon in Anaheim), I was unable to cover the Del Mar Nationals on Sunday. Instead, I was there on Saturday.

As I approached the event I could hear loud engines and tires squealing. I know, as a previous competitor in the Goodguys All-American Sunday autocross, that this must surely have been coming from the Goodguys Autocross — and it was! I could not resist the temptation to begin my coverage there.

Each autocross run consisted of the better part of two laps around the course, before exiting to the right and speeding towards the finish line and shut-down area, where ALL COMPETITORS MUST STOP.

The blue pickup truck was quick — its driver skilled — as he deftly negotiated his way through the sea of orange pylons, on what seemed to be the fine edge of maintaining control.

In earlier runs I had observed many competitors’ vehicles skidding to a stop after the finish line, creating billowing clouds of tire smoke, before turning left and slowly proceeding away from the course. A Mustang even had a lazy spin, as you’ll see in the video.

Sure enough, after the blue truck crossed the finish line it, too, began to skid — but it did not appreciably slow down or turn left.

Instead, sickeningly, it crashed headlong into a double-set of heavy concrete barricades, breaking one in half and sending truck parts — including the truck’s detached hood — flying through the air, where they were stopped in flight by a motorhome that was parked on the other side of the barriers. Click on this link to the “AutoMatters & More” YouTube channel to watch my thrilling video, entitled “Slow Down to Go Fast”:

Emergency personnel and track workers rushed to the scene, fire extinguishers in-hand, just in case. The truck was a mangled wreck. Fortunately, there was no fire, the driver and passenger seemed alert and, after a short time lying on a stretcher, the driver got up and was smiling.

Afterwards, when I looked at the video to see exactly what had happened, I observed that through most of the shut-down area, only the truck’s front brakes were locked. The rear brakes did not lock until just before impact.

Upon impact, the driver’s head moved violently forward, and then returned to an upright position. As I too experienced once, while a passenger in an off-road race truck, their heavy, unrestrained helmets added to the pendulum effect. Hopefully the driver and his passenger will not suffer from whiplash. The paramedics checked them out and fitted them with neck braces, as a precaution.

There is a fine line between going as fast as possible in motorsports competition, and going beyond that point. This accident showed a consequence of that.

Next time, in Part Two, explore the stunning selection of lowriders…

… followed in Part Three by a leisurely cruise between the rows of palm trees that tower over the iconic Del Mar Fairgrounds.