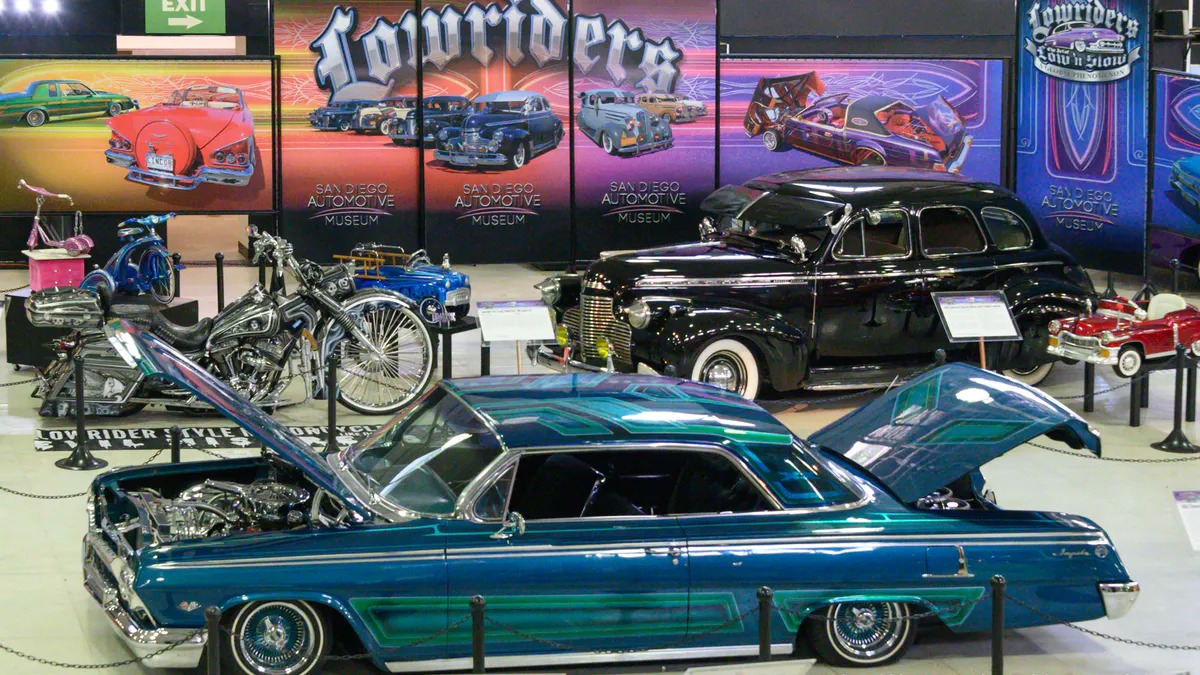 Each one is a beautiful, individual expression of rolling automotive art

Lowriders are amazing, celebratory pieces of automotive art. Often they are heavily customized, emphasizing style and attitude as they ride seemingly impossibly low to the ground.

The museum tells us that lowriding emerged from the Mexican-American barrios (communities in cities and towns), but they have since spread around the world to places including Thailand, Indonesia, Sweden, Norway, Austria, Brazil, and Spain.

Lowriders in the museum’s exhibit included a 1963 Chevrolet Impala SS named “Pura Sangre” (Pure Blood) — vibrant red, inside and out. On loan from Fermin Contreras of The Crowd car club of San Diego, Fermin chose this car because 1963 was the year of his birth. It took him 13 years to find one with the features that he wanted: a Super Sport convertible with sport performance and special trim. Totally restored in Tijuana, Mexico, it was completely redesigned, with pointed front and rear corner panels, and bright trim that adds additional punch to the car’s lines.

Erica Clark’s stunning purple 1979 Chevrolet Monte Carlo lowrider is named “La Muerte” (The Dead). She is a member of the Rollerz Only Car Club in Phoenix, Arizona, and grew up on the Gila Indian Reservation. That is where she developed her love for cars, drag racing, and lowriders. Over the course of six years, she and her boyfriend applied the candy paint patterns and customized the interior with purple crushed velvet.

Now she shares her love of lowriders, lowrider bikes, and community with native teenagers, teaching them how to work on the vehicles, and setting an inspiring example to them for how to live their lives.

The Buick Riviera, introduced in 1963, was described by legendary automotive designer Sergio Pininfarina as “one of the most beautiful American cars ever built,” but Lalo and Maria Casillas of City Car Club in Jamul, California have elevated their 1965 Buick Riviera Sport Coupe lowrider to another level entirely. After a search that lasted four years, one of Lalo’s brothers finally found one here in San Diego, where it had been its entire life. It still had its original white paint, forest green interior, and even its original sales sheet. Airbags were added to it and it was driven that way for several years until a frame-up restoration was done. Lalo did the mechanical, hydraulics, and bodywork himself, eight hours a day for a year. Lalo’s wife named the car “Spill The Wine,” for the light lilac color of its Chateau Mauve Firemist paint.

You may have heard of the outstanding Tennessee Williams play “A Streetcar Named Desire,” written in 1947. That play inspired the name “Desire” given to the 1971 Lincoln Continental Mark III by its owner John Metcalf of San Diego, in recognition of his wife Cynthia having stood faithfully by him throughout the nine months overall that it took to build the car. He did much of the work himself. John wanted a lowrider that would stand out from Impalas and Fleetlines. Their formerly maroon-colored Lincoln has hydraulics and custom pinstriped “Pacific Sky” blue paint. It has won nearly 50 lowrider shows all over the U.S.

My dad had a new 1969 Lincoln Continental Mark III. That was a beautiful car too. As a teenager in Canada, I had the privilege of driving it occasionally. I remember that it had light gray, tufted fabric upholstery and a Cartier clock. Its exterior color was dark gray with a matching vinyl top. It had a majestic, upright, bright chrome grille reminiscent of one more typically found on a Rolls-Royce, and a tire-shaped bulge on the rear of the trunk lid.

For the latest information about visiting the San Diego Automotive Museum, check online at www.sdautomuseum.org. Unfortunately, “on Nov. 10, (California) moved San Diego County into Tier 1, also known as Purple Tier, of the state’s COVID-1 risk levels. This means restrictions will go into effect on a variety of businesses and activities.” Included on the list of those who will need to stop indoor operations starting Nov. 14, 2020, are museums. “The restrictions will remain in effect until the County moves back to Tier 2, also known as Red Tier (www.sandiegocounty.gov).