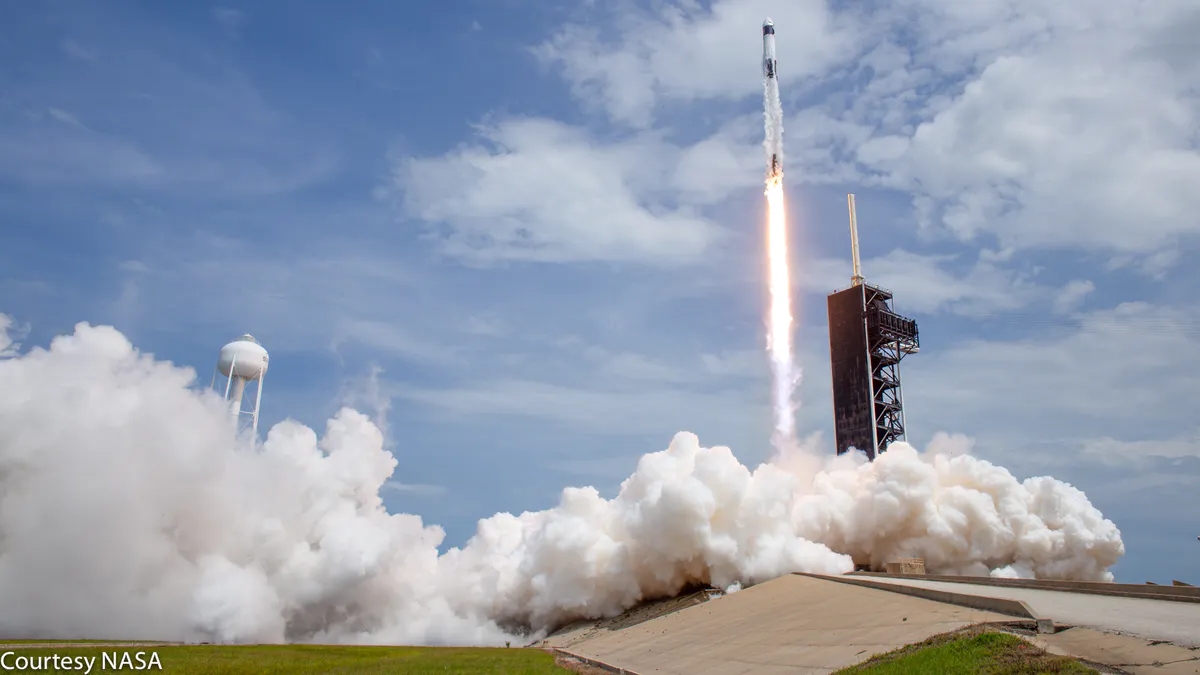 NASA & SPACEX LAUNCH FIRST ASTRONAUTS FROM U.S. SOIL TO THE ISS SINCE 2011

Includes edited NASA video of the launch, plus a shout-out to STEPHEN COLBERT!

We are witnessing a confluence of significant, profound events across our country and around the world. These changes will most certainly contribute to the determination of our future, and will no doubt be felt for many years to come.

As people around the world collectively held their breath, one of these changes literally was launched from the Kennedy Space Center in Florida last Saturday, May 30, 2020 as NASA astronauts Bob Behnken and Doug Hurley – each an experienced test pilot and veteran of the U.S. Space Shuttle Program – flew the Demo-2 mission aboard a SpaceX Crew Dragon spacecraft, on top of a Falcon 9 rocket from Launch Complex 39A.

Their destination was the International Space Station (ISS). This was the first flight into orbit of American astronauts on an American rocket from American soil since the end of the space shuttle era in 2011.

NASA.gov tells us that U.S. astronaut Robert Behnken is joint operations commander for this mission. In that capacity, he is responsible for rendezvous with the ISS, docking and undocking, and certain Demo-2 activities while there. He has been on two space shuttle flights and performed three spacewalks during each of those missions. Prior to joining NASA, he served as a flight test engineer with the U.S. Air Force.

Douglas Hurley is the spacecraft commander for Demo-2. His responsibilities include launch, landing and recovery. Like Behnken, he has completed two space shuttle flights, including STS-135 – the final space shuttle mission in July 2011. Prior to joining NASA, he was a fighter pilot and test pilot in the U.S. Marine Corps.

After last Wednesday’s launch was scrubbed shortly minutes before the scheduled liftoff due to weather concerns, the expectation for a Saturday launch was cautiously optimistic that weather conditions would improve sufficiently at the required launch time. As the instantaneous liftoff time neared (there could be no wider window of opportunity), the go-ahead was given.

The countdown continued and the launch was spectacular. The engines fired and the stages separated according to plan, accelerating the spacecraft to approximately 17,000 mph and propelling Crew Dragon on its nearly day-long journey to intercept with the International Space Station.

Upon arrival, it was slowly, carefully and flawlessly docked. SpaceX Crew Dragon is designed to dock autonomously, but astronauts aboard the spacecraft and the ISS can take control, if necessary.

Soon, the hatches on the Dragon and the ISS were opened, and Bob and Doug entered the ISS. As the newest members of the ISS Expedition 63 crew, they were welcomed aboard by NASA astronaut and Expedition 63 Commander Chris Cassidy, and Cosmonauts Anatoly Ivanishin and Ivan Vagner of the Russian space agency Roscosmos. Next, the entire crew assembled for group photos and video interviews with dignitaries back on Earth.

This flight test Crew Dragon can stay in orbit for about 110 days. Its time there will depend upon “the readiness of the next commercial crew launch. The operational Crew Dragon spacecraft will be capable of staying or orbit for at least 210 days as a NASA requirement.”

“Upon conclusion of the mission, Crew Dragon will autonomously undock with the two astronauts on board, depart the space station and re-enter the Earth’s atmosphere. Upon splashdown just off Florida’s Atlantic Coast, the crew will be picked up at sea by SpaceX’s Go Navigator recovery vessel and return to Cape Canaveral.”

This is the first time any commercially built spacecraft has delivered astronauts to the ISS. It is the final flight test for SpaceX, designed to “validate the company’s crew transportation system, including the launch pad, rocket, spacecraft and operational capabilities.” Included are verification that the spacecraft performs as intended by testing the environmental control system, the displays and control system, and the maneuvering thrusters.

This is an important step towards the next major goals. Those will begin with the agency’s Artemis program, which will land the first woman and the next man on the moon’s surface in 2024 for further exploration. Long-term goals include establishing a base on the moon and travelling on to explore Mars.

Working together we can continue to accomplish great things. We have much to look forward to in the coming years. These are exciting times indeed.