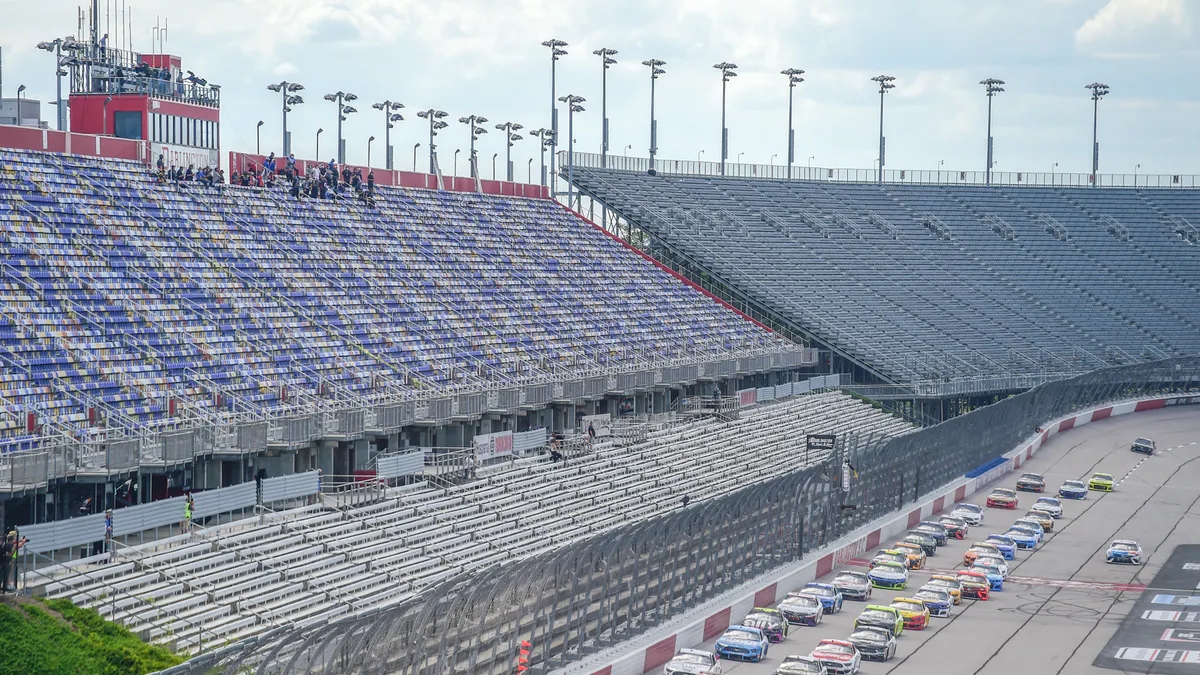 NASCAR IS BACK BUT WHEN WILL THE FANS RETURN?

Due to the coronavirus pandemic, for more than two months the thrilling sights and sounds of NASCAR stock car racing had been absent from racetracks. Instead, the race teams and fans stayed safely at home.

Some drivers turned to iRacing, and millions of fans watched their favorite drivers – including some from the past and from other racing series – compete on national television. NASCAR racer Clint Bowyer shone as a TV personality.

The silence at the race tracks was finally shattered last Sunday as a full field of NASCAR drivers raced at Darlington Raceway, in the “NASCAR Cup Series Real Heroes 400.”

The race honored “healthcare workers serving on the front lines in the fight against covid-19,” “in support of The Real Heroes Project, a collaborative initiative by 14 sports leagues.” In place of the driver’s name, a healthcare worker’s name appeared on each car.

“To ensure the safety of the participants and the local communities,” NASCAR took unprecedented measures to address the life-threatening health threats posed by COVID-19.

Access to the race track was limited to essential personnel. No fans were allowed in. Instead, the race aired live on television.

The number of members of the media was strictly limited, as were the number of race team members allowed entry, and they were required to wear face masks.

The race and all preliminaries all took place in one day. There was no qualifying and no practice, so how the cars would perform in the race was pretty much an unknown, except what could be predicted from previous race car setups, experience and computer simulations. Since there was no qualifying, starting positions were determined by a televised random draw, in combination with already-earned points.

Obviously, in many ways this was a very different and unusual NASCAR CUP SERIES event, in the new, COVID-19 world; but in important ways that race teams, fans, officials and the media care most about, the racing was as good and as exciting as ever – perhaps even more so, because of the significant unknowns that would be faced on the first lap and beyond. Would the long time away from the track cause mistakes to be made – both on the track and in the pits? How would the race cars behave on a “green” and ever-changing track surface? How would the recently successful iRacers perform when the race cars were no longer all equal, and seat-of-the-pants feel became an important factor again? Several of the drivers had never even raced on this track!

Would all of the cars make it through the first racing lap? No. Exiting the second turn, Ricky Stenhouse Jr. lost control and crashed, damaging his car sufficiently to abruptly put an end to his race. To their collective relief, at least the other teams were able to finally get a sense of how their cars were handling, to make adjustments.

Jimmie Johnson – seven-time NASCAR champion and driving in his final season – had a commanding lead as he approached the Start/Finish line on his way to a sure win of the first stage, but that was not to be. He misjudged the slower speed of a car that he was about to put a lap down, did a lazy slide down into the inside wall and wrecked his car.

48-year-old Matt Kenseth – a popular, respected, Daytona 500 and championship winner – came out of retirement to drive the #42 Chevrolet for Chip Ganassi Racing. He finished in the top ten.

Ryan Newman, who suffered a head injury in a terrifying rollover crash that destroyed his car in the final lap of this year’s Daytona 500, returned to race after his long period of recovery. He finished 15th.

Kevin Harvick won the race. He credited his very experienced team who had gotten the setup of his car right even before it rolled off of the truck. In his post-race interview (as he spoke into a microphone that was attached to a long pole that was held by the socially distanced interviewer), Kevin looked at the empty grandstands and commented on how unusual that sight was. He alone was in Victory Lane for the celebratory photography.

This was the first of 20 races between now and June 21, some midweek. To see the schedule and race results, go to www.nascar.com/2020/schedule