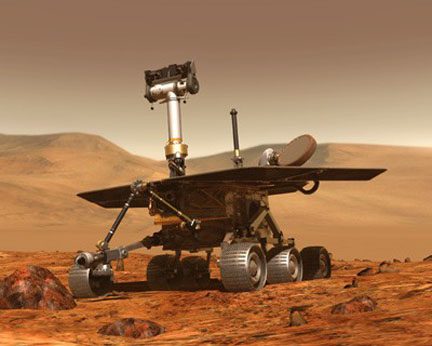 Okay, before I get a flood of e-mails I’ll state for the record that I did NOT, repeat NOT test-drive or even see this vehicle first-hand. So yes, there is a possibility that none of this actually exists except in some hidden studio on Earth. However, I sincerely doubt that, so in the interests of trying to cover all things automotive in this column, I just had to address this hot automotive topic. Everything I’m about to tell you is available to the public in much greater detail on the Internet, courtesy of NASA and JPL.

For the past few weeks an amazing remote-controlled vehicle has been a hot, positive topic in the media. I can’t remember when that last happened. Normally the only time an automotive subject gets this much coverage in the media is when something bad happens, like the Ford Explorer tire failure issue or fire hazard side-saddle fuel tanks on trucks. Oh sure, when the auto shows are in full swing we might see a few seconds of coverage for the latest vehicles but those are fluff pieces – very light on content.

This subject is different. Thanks to not only the print and broadcast media, but the Internet as well, we are being deluged with all sorts of information on the successful deployment of the first of two Mars Exploration Rovers. As I write this, a second Mars rover is due to land on the red planet in a few days.

Each rover was designed to function as a mobile geological laboratory. They are 5.2 feet long and weigh only 384 pounds. In their three-month prime missions they are only expected to travel about the length of six to ten football fields.

This is truly fascinating, as Mr. Spock of Star Trek fame might have said. Just think about what had to be accomplished before this could have happened – the ideas, the detailed planning, the money.

Then everything was built and sent off into space for their long journeys aboard powerful, remote- and computer-controlled launch vehicles.

The next part was what I found most amazing of all: to drop the vehicle onto the Martian surface with near-pinpoint accuracy without breaking it. From all accounts the vehicle had to be decelerated from a tremendous speed. For what I assume is a relatively delicate, sensitive and complex mechanical device, to sustain this sort of force without damage is absolutely astounding, but they did it with the Rover Spirit.

Now Spirit has started to drive around Mars. Amazing! I’ve got to tell you, I have a racetrack for radio-controlled cars in my back yard. Despite our best efforts, we are continually crashing my cars into the curbs – and that is with the luxuries of line-of-sight and a consistent track surface. So to be able to successfully control a Martian rover by remote control from millions of miles away, and do so over a surface that no one has ever set foot on, is mind-boggling. I am truly in awe of the people who pulled this off.

Unlike our everyday cars, trucks and SUVs, a rover has not four but six wheels. This should provide for a very stable vehicle as it negotiates uneven, rough surfaces. For great traction, each wheel has its own dedicated motor. Since there probably are no roads on Mars, think of a rover as a very competent off-road vehicle.

For good power and control, an obvious benefit of this is that no matter how many or which wheels are making contact with the ground, they will be in a position to help move the vehicle.

Most Earth-bound cars and trucks are steered by the front wheels turning in unison. Some vehicles also have limited rear-wheel steering. The high tech rover goes well beyond even this, with individual steering motors for each of the two front and rear wheels. That enables the rover to not only make swerving, sharp turns but also to turn in place, a full 360 degrees. Imagine the possibilities opened up if you could turn without moving forwards or backwards. The rover can do that.

Each of our everyday vehicles has some sort of suspension system. That enables us to drive over bumps without getting airborne, to negotiate corners properly, to help maintain contact between the drive wheels and the road surfaces, and to comfortably transport us and our stuff. The rover has a suspension too, and it is fascinating.

The design of the rover’s suspension system is an adaptation of the “rocker-bogie” system fount on the Pathfinder mission. If you’re like me that description is absolutely meaningless so lets see what else NASA has to say about it.

“Bogie” is a term from the old railroad era. NASA tells us that a “bogie is a train undercarriage with six wheels that can swivel to curve along a track.” I guess that makes sense. The six wheels need to somehow work together to eliminate weird lurches and turns as the vehicle drives along.

The term “Rocker” is even more confusing. NASA says that it “comes from the design of the differential, which keeps the rover body balanced, enabling it to “rock” up or down depending on the various positions of the multiple wheels.” So what does this mean? NASA suggests that it helps to “prevent the rover from suddenly and dramatically changing positions while cruising over rocky terrain.” Somehow it helps to keep the rover level and “even out the weight load on the six wheels.” I’ll take their word for it, even though I don’t understand it. It sure does sound high tech.

They say “the rover is designed to withstand a tilt of 45 degrees in any direction without overturning.” Think about that for a minute. Imagine being on a 45-degree slope and not falling down. That’s one of the things that the rover has been designed to do, although it is also programmed to avoid exceeding a 30-degree angle of tilt, just in case. That should give it a pretty healthy margin of safety.

What all this means is that the rover can drive over Martian rocks and through holes that are more than a wheel diameter (10 inches) in size. To help do this, the rover’s wheels have cleats that provide grip in everything from soft sand to rocks.

So how fast is the rover? Not very. But like the turtle and the hare, slow and steady gets the job done. The rover’s top speed on hard, flat ground is said to be only 2 inches per second. Let’s see, according to my limited math skills that translates to 10 feet per minute and 600 feet per hour.

Furthermore, it has “hazard avoidance software that causes it to stop and reassess its location every few seconds.” That drops its effective speed to 1/5th of what I just told you. Furthermore, it is programmed to only drive for about 10 seconds at a time, “then stop to observe and understand the terrain it has driven into for 20 seconds.” Ouch. It’s sure not going to win many races with our cars, trucks and SUVs. But wait, that second rover is due to join Spirit on Saturday. Hey, maybe we could see a race on Mars after all!

Finally, I have a request. I know, from watching this subject unfold on TV, that some of the people involved in this amazing project live and work in San Diego County. If any of you can help me get closer to a rover or any other vehicles destined for use in space, please contact me. We definitely need to get together.