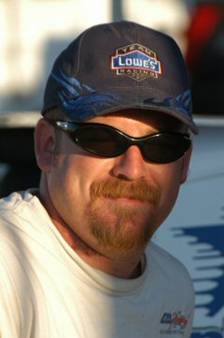 Racer Profile: An interview with Scott Brown at Cajon Speedway

Scott Brown is a race car driver. He campaigns a Grand American Modified car at Cajon Speedway. The tough financial challenges that he faces, and the choices that he has to make, are common to many racers. During racing season, Scott works during the week at a ‘real’ job and then goes racing on weekends.

I caught up with Scott towards the end of the 2004 season at Cajon Speedway. He shared his interesting perspective on racing with me. Here are excerpts from that interview:

“My uncle raced here for several years. It just runs in the blood with us. I raced a go-kart [from] when I was twelve until I was 18.”

“I ran the Bombers out here in ’95 for two years. I was ‘Rookie of the Year’ and finished eighth or ninth in the points.”

“I took a year off and was helping my uncle on his Modified. Then I got a Street Stock for a few hundred bucks – put that together over an off season. I was racing that for two years.”

“I do heating and air conditioning for work. I work on my own car. It’s at my house in my garage.”

“You spend a lot on tires. That’s the biggest thing. To be competitive you’ve got to buy a couple of tires a week [Goodyear racing slicks]. You have to buy them here at the track. They’re radials. They’re just under a hundred bucks [each]. Usually you use them for one event, then for practice the following time and then put new tires on.”

“We run methanol. It gives the car about an extra 50 horsepower just by running the methanol, and it makes it run a lot cooler. We’ll do 20 gallons a night. With gas we’d only go through ten. You burn twice as much fuel. It is a lot better. The motors run so much cooler. You get all the extra horsepower, right off the bat.”

“It all adds up. If you have any broken engines or anything like that it just takes up all your time. It costs about $350 bucks a week to be out here.”

Scott discussed the process of how he found, prepared and campaigned a race car in recent years: “[It was] sitting out in the back of a boat yard, all taken apart. The owner passed on and the wife just wanted to get rid of it. We got that for under a grand. It was pretty tore up. We spent four or five months putting it back together. It worked good.”

“We finished second in the points our first year out. We had a really good year. We didn’t have very many engine problems. In the second year out with it we finished third. Then the third year I won the Championship – 2002.”

“We’re way-low budget racing. There’s quite a few guys out here that just have endless pocket books. We do very good for what we have. We just do it out of our garage. We’re pinching pennies. It’s been rough but we do good.”

“This year has been the hardest year. It’s just hard when you don’t have any money behind you. You’re having to do other things to get by. We haven’t been buying tires in a week, [things] like that. We’ve been running on old tires. It hurts a lot.”

On this particular night Scott’s car broke during his feature race. According to the “Final 2004 Cajon Speedway Point Standings” he came in sixth in the competition for the “Carpets Galore Hard Charger Award” and also sixth in class in Cajon Speedway’s Grand American Modified Division. His plans for the future are “probably to keep on racing for a little bit. It’s just hard right now.”

I wish Scott and other low budget racers well. As an autocrosser I can appreciate both his passion for the sport and the financial challenges that he constantly faces. Being competitive in car racing is expensive.