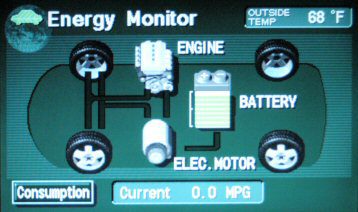 With the price for a gallon of regular gas exceeding $2.30 I thought it was about time I wrote a column about how you can stretch that gallon further.

I purchased a 2005 Toyota Prius recently and, after about 1600 miles behind the wheel, I have some comments to share with you.

The Prius is a full hybrid. That means it can, if conditions are right, not just run its gasoline engine or its gasoline engine and electric motor together, but also on just its electric motor. Conditions that don’t require the additional propulsion provided by the gasoline engine include creeping along at single digit speeds in heavy traffic. In those conditions fuel economy is excellent – since you’re probably using little gasoline, if any. On the other hand, if you’re zooming along an uphill section of freeway, the result is significantly poorer fuel economy. Hopefully the two will usually average out for excellent combined fuel economy.

Overall I think the Prius is a great and, for now, unique car. Acceleration is good, thanks to the combination of an economical gasoline engine and a high torque electric motor. And I should mention this: it does not ever need to be plugged in to recharge. In fact, you cannot plug it in. Instead, the batteries are recharged as you drive along. Even braking energy is put back into the batteries instead of being wasted as heat.

Toyota’s Prius really does get phenomenal fuel economy and, while accomplishing that feat, is the first hybrid that offers enough seating (for five) and storage capacity (the rear seats can fold down for extra capacity) to meet my needs. My kids really appreciate its environmentally friendly characteristics. I am also looking forward to the $1,500 Federal tax credit.

Even though I have owned many high performance cars and currently own and enjoy my turbocharged MazdaSpeed Miata, I find myself driving in fuel economy mode whenever I am in my Prius. At first I was averaging about 45 mpg per tank of gas. Now, 379 miles into my current tank, I am averaging 51.6 mpg, thanks largely to 30 miles of creeping along in stop and go traffic on Los Angeles’ clogged freeways. During that first 30 miles of this tank I averaged about 66 mpg – on regular gasoline. That is nothing short of incredible. Bring on the gridlock!

One thing I particularly appreciate is being able to run the air conditioner without the gas motor running, while I am parked and waiting for someone.

My complaints are few but a couple are safety-related. The first concerns the shift lever for the electronically controlled continuously variable transmission (CVT). The first day I owned my Prius I drove it to a nearby city and parked in a diagonal parking space along a fairly busy street. When it came time to leave I backed out carefully. When I cleared the parked vehicle beside me I saw that traffic was approaching, so I quickly moved the shift lever (actually more like a spring loaded, video game joystick which Toyota’s calls an “electronic shift lever”) from its home position into what I thought was Drive. Somehow either I or the gearshift’s helper spring apparently bounced the little shift lever back into Reverse (which is directly behind Drive in the gate) because when I quickly depressed the accelerator pedal the car lurched backwards. Somewhat panicked I again tried to quickly move the lever to Drive. Again I punched the accelerator and again the car lurched backwards. Even though the Prius beeps when in Reverse, I don’t recall hearing it those times. I was probably too focused on getting out of the way. Luckily the approaching traffic avoided me. Finally, the third time I slowly and deliberately moved the shift lever into Drive. This time the car moved forward, but boy was I rattled by then.

I’m glad I have the optional side curtain airbags. Shifting the gearshift lever with the amount of force I use for a manual transmission or even for a conventional automatic transmission is too much for the Prius. So, ever since that day I’ve been very gentle and deliberate whenever I’ve moved the dainty shift lever – and have had no further trouble with it. Nevertheless, I sure wish Toyota had installed a conventional shift lever with strong detents, like Ford did for the CVT on their Escape Hybrid. Because of the Toyota’s touchy shift lever operation, I would not feel at all confident lending my Prius to anyone for fear they’d get into trouble like I almost did.

Something — perhaps the tires (hard, low rolling resistance?) or the electrically assisted power steering, is making it unusually difficult for me to keep the Prius from wandering around in my lane when I’m driving on the freeway. Keeping it from wandering requires significantly more attention than I’m used to with other cars over many years of driving.

In one way I think I’ve been spoiled with the other new cars I’ve owned before this one. My Miata and my Focus both came with nice quality, zippered fabric owner’s documentation holders. In contrast, the Prius’ documentation came in a cheesy plastic folder. This seems odd because I paid more for the Prius than for either of those other two cars.

Another complaint concerns the limited view out of the rearview mirror and the passenger-side rear quarter windows. The band that splits the upper and lower portions of the rear window sometimes hides the traffic that is behind me. This problem is most noticeable when I’m driving at night, because if I can’t see the headlights of the car that is behind me, the rest of the view out of the window is too dark to readily see. Rain is a problem too because the rear wiper only clears the top part of the window (which is little more than a narrow slit because of its extremely horizontal angle). I also have some difficulty seeing what is outside the passenger-side rear quarter windows when I try to shoulder check. I guess that these are prices that drivers have to pay for the unconventional, aerodynamic styling of the Prius.

I wish that Toyota had included a few grocery bag hooks in the luggage compartment. Even my humble Ford Focus wagon has them. They are very useful because they keep groceries in their bags and upright. I bought and installed the optional Toyota luggage compartment net but hooks would definitely do a better job with multiple bags of groceries. I’m also not confident that the plastic panel, which the instructions told me to drill two holes into to install the top half of the net, would hold very much weight before sustaining damage.

I generally like the optional “Smart Key” keyless ignition and door locks system. I leave the ‘key’ (a transponder?) in my pocket and when I get to the car it unlocks itself. It also lets me start the car without inserting the key in the car. The problem I occasionally have with the system, however, is that sometimes I accidentally leave the car unlocked when I think I’ve locked it. If I try the door handle to make sure the door is locked, sometimes that process actually seems to unlock the door. I think I may only be allowed one ‘try,’ and that if I make any more tries the door unlocks itself. This car is certainly high tech. I can see how that might not appeal to some people.

Despite these issues I am very glad that I bought a Prius – especially now. I love saving money on gas and I’m doing something good for our environment, too. It meets my needs quite well and my kids like it. Toyota’s 8-year/100,000 mile warranty on the Hybrid-related components gives me peace of mind. Motor Trend named the 2004 Prius (essentially the same car as the 2005 model, as far as I can tell) their “Car of the Year.” You might want to put your name on a dealer’s waiting list for one. Thankfully Toyota will be increasing production of the Prius in early 2005 in an attempt to meet the high demand for it.