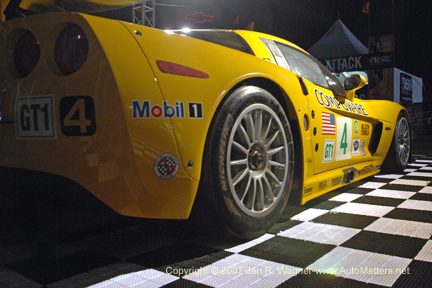 REV IT UP™ presented by CHEVROLET

Let’s see. The offer was to test drive a bunch of GM’s latest vehicles on a closed track, drive in a drag race with a “Christmas tree” start, ride along in a 505-horsepower Z06 Corvette, race go-karts and, if that wasn’t good enough, cap everything off with an autocross offering prizes that include a one-per-city trip to the Bob Bondurant School of High Performance driving and a grand prize of a brand new, 430-horsepower, 2008 Chevrolet Corvette. All this and more was offered for the incredibly low price of only $25.

Naturally I had to check this out. The folks at REV IT UP™ presented by CHEVROLET thought so too, and invited me as part of a group of journalists to experience their brand of automotive fun when it stopped in Orange County at El Toro, California.

You might remember seeing coverage of REV IT UP™ in previous AutoMatters columns. The format was similar but it used to feature another manufacturer’s automobiles. In addition to the price reduction, this year had a couple of other significant twists.

New for this year, each day’s quickest qualifiers would earn an opportunity to compete at the end of the day in Chevrolet Corvettes – and when I say end of the day, I literally mean end of the day. They would autocross under lights at night for their chance to win their city’s prize of training at the Bob Bondurant School of High Performance Driving. Autocrossing at night in Corvettes would be a very welcome way to beat El Toro’s near oppressive daytime heat.

We started to arrive at 3 on Friday afternoon. First up, we sat in on two classroom sessions: an orientation to the various events and attractions, and then an introduction to high performance driving, which was taught by a race driver with many years of experience.

With that behind us, we were set loose behind a variety of wheels. At the “Reaction/Traction Course” each of us got two passes at the “Christmas tree.” Once was in a 395-horsepower Chevy TrailBlazer SS. I gratefully welcomed some last-minute instructions, and then practiced holding the brake with my left foot while giving it some gas with my right. When the light turned green I released the brake and punched the throttle. The TrailBlazer hooked up and took off down the track. This seemed pretty easy.

I was ready for the next vehicle: a 303-horsepower Impala SS. Once again the white staging lights lit as I rolled into position. I put my left foot on the brake, pressed down hard and revved up the engine with my right foot. The sequence of lights continued: yellow, yellow, yellow – red! What? I started to move before the green light came on and I red-lighted. Aargh! How humiliating. Nevertheless, I took my run just to check out the car. Nice.

On other courses we got to drive a new Corvette, as well as a variety of other new Chevrolets.

Even though we were not permitted to drive it, we also could get a thrill ride in a 505-horsepower Z06 Corvette.

When we got hungry, a variety of hot food and cold beverages were available.

Souvenirs could be purchased.

We had an informal, two-lap Media competition in the Cobalts for bragging rights. After our first lap, a journalist from UrbanRacer.com was in the lead. Bursting with energy and confidence, Annie was interviewed by the on-track announcer.

Annie’s second lap was even quicker than her first and I went over to congratulate her. But wait, she had hit a cone, incurring a time penalty.

My second run was not quite as quick as her best run but it was quicker than her first and it was cone-free. That meant I had managed to come from behind in a squeaker and capture the lead for AutoMatters.net. Yes!

My reward for winning our Media Challenge was a REV IT UP™ watch and some cool little orange pylon pins.

As the sun set, temperatures cooled off but the competition with the Cobalt SS coupes remained hot.

The competition was dramatic as the headlights quickly appeared, the cars roared in and out of the patches of light, and tail-lights disappeared into the darkness. Trying to capture the action with my camera reminded me of the difficulty of shooting fast-moving objects in low light.

The day’s competition ended just before 11 pm, at which point I drove back to San Diego. It had been a very full day’s work.

I wish I had signed up for a chance to compete in a Corvette and win some great prizes.  For just $25 it is a real bargain. If you would like to check out REV IT UP™ for yourself, there is still time as it moves eastward across the country. For locations and dates, as well as for more information, go to www.revitup.com.