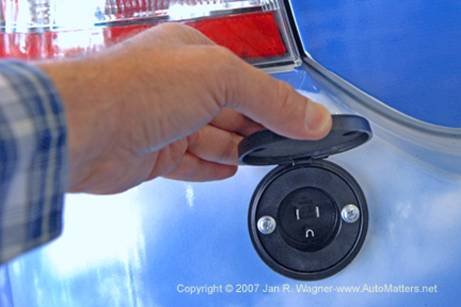 They are coming sooner than you may think. I’m talking about plug-in hybrid vehicles. Drive them during the day, using a combination of fuel and electricity, and then recharge them at night. What’s the big difference between these and today’s hybrids, you ask? The answer is a big-time improvement in fuel economy.

I recently attended a presentation by San Diego Gas & Electric at the San Diego Regional Transportation Center. While there I also revisited the ECO-Center (see AutoMatters #105 in the column archives at https://automatters.net/2004%20Columns/0105.htm). As we sat and listened to speakers tell us about plug-in hybrids, two technicians converted an SDG&E Toyota Prius into a plug-in hybrid.

Fuel economy? How does over 100 mpg sound to you? It sounds great to me. For people who take short trips of, say, 20 to 40 miles, that’s what you can already expect from today’s technology. Of course, if you take longer trips or drive with a heavy right foot, you will use more fuel and your fuel mileage will decrease accordingly.

As battery technologies continue to develop and economies of scale improve, well, you may want to have a plug-in hybrid in your driveway – especially as the cost of fuel continues to increase, as it no doubt will. Right now, though, the technology is still very expensive.

Plug-in hybrids are under development by a number of companies, large and small, near and far. One such company is Plug-In Conversions in Poway, California (www.pluginconversions.com).

The company that provided the kits for the two San Diego Gas & Electric plug-in hybrids is Hymotion. They are headquartered in Ontario, Canada. To find out more about them and their technology, go to www.hymotion.com.

In their current state of development and component parts’ price and availability, the kits are still very expensive – so expensive that they are not yet intended for purchase by individual consumers – except, perhaps, early adopters. According to their Web site, Hymotion expects that “individual conversion modules will be available in early 2008.”

Furthermore, the creators of this particular conversion kit are regularly consulting with major automakers as they work to develop their own, more cost-effective, mass produced hybrid plug-in vehicles. The bottom line is that they are not far away.

Except for the fact that this particular kit puts a battery pack where the spare tire was, combined with the electric socket on the rear bumper, you’d be hard pressed to tell the difference between this 100 mpg plus Prius and a regular, 45 mpg (real world fuel economy) Toyota Prius.

San Diego Gas & Electric had two hybrids converted “as part of a demonstration project to study the performance and potential of plug-in hybrids to improve gas mileage and reduce emissions.” They recharge by simply being plugged into a standard 110-volt electrical outlet. However, the outlet should be the outdoor type, since the car could be dripping water from being outside in wet weather.

According to SDG&E, in addition to saving money on fuel, plug-in hybrids also could “cut greenhouse gas emissions in half.” “The transportation sector accounts for more than 40 percent of greenhouse gases generated, so, once plug-in hybrids enter the market and more of them are on the road, the impact will be significant,” according to Rick Morrow, Vice President, Customer Service – Major Markets for SDG&E.

There is even more good news on the environmental impact front. According to SDG&E, “in California, the electricity used to power a plug-in hybrid generates much less carbon dioxide than what’s produced by a typical gasoline-powered vehicle. And because California has the cleanest mix of electricity, we have a great potential for greenhouse gas reduction.”

A big advantage is that the basic supply infrastructure for the electricity is already in place. Plug-in hybrids would, for the most part, be recharged in off-peak hours, after people return home from work, when there is an excess of available electricity. SDG&E said that “as many as 4 million plug-in hybrids could be added statewide without the need to build new electricity infrastructure to support them.” Furthermore, I recall hearing that this is a very conservative (read ‘low’) estimate.

Down the road it is also likely that electricity from plug-in hybrids may be sold by consumers and fed back into the power grid, as needed. At the presentation, various scenarios for paying for the electricity were discussed. One might be able to access their electricity account while plugged-in away from home, so if you are visiting your grandma she wouldn’t have to pay for you to recharge your car’s batteries.

I think it is reasonable to predict that in as little as a couple of years from now, even the fuel economy numbers realized by today’s most economical hybrids will look very low in comparison to what will be readily available from the latest plug-in hybrid vehicles. Furthermore, I also predict that there will be many more vehicle types to choose from. I look forward to the day in the near future when I may buy an economical, roomy, car-based, plug-in hybrid SUV or minivan to carry me and my stuff. We may well be on the road to energy independence.