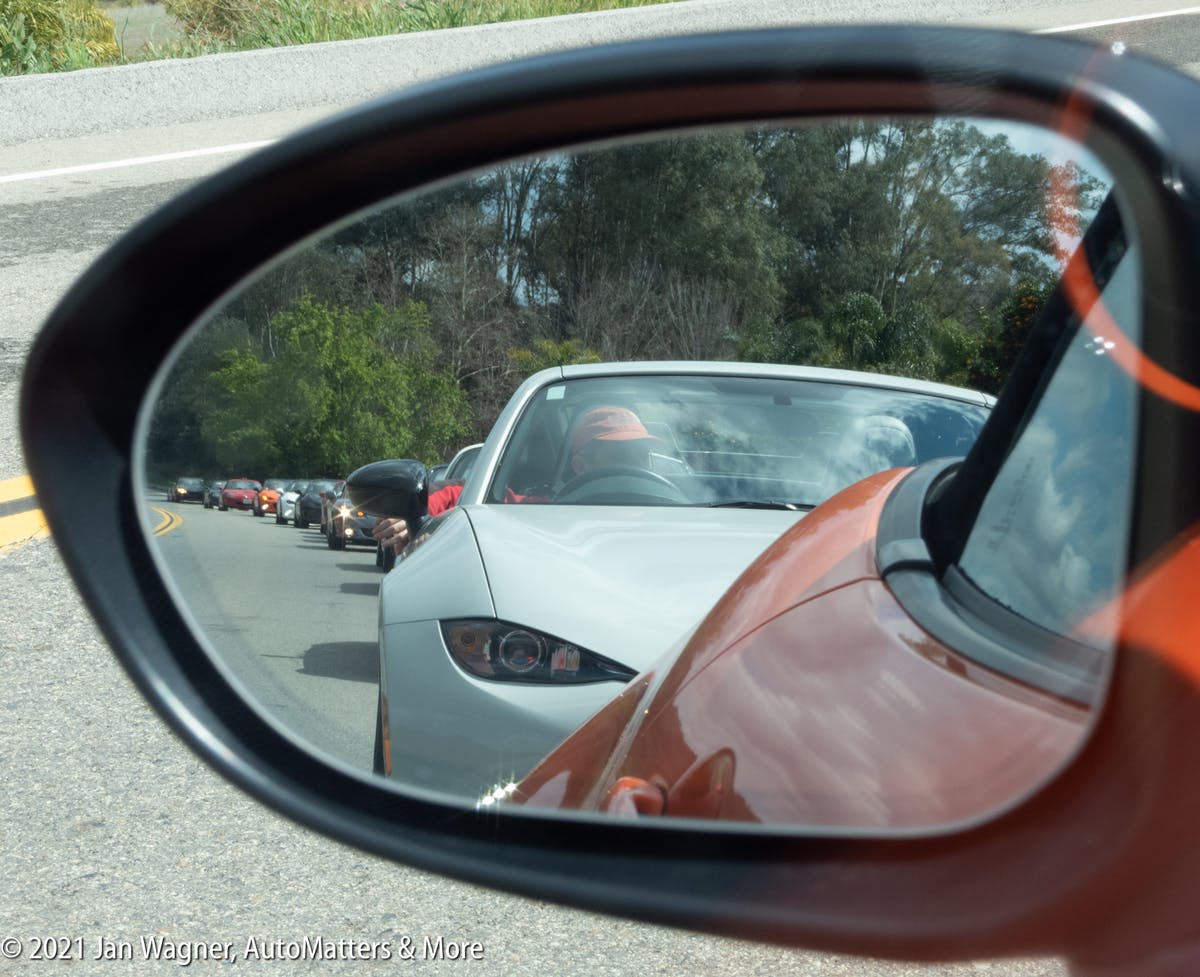 Now that I’ve been fully vaccinated against COVID-19 (with the Pfizer vaccine), it is probably safe for me to carefully begin to resume some of my pre-pandemic activities, while wearing a face mask. Right up there on my list of those missed activities is driving for pleasure again, as opposed to just driving to make necessary trips to the grocery store. I also need to drive to restore my driving ability. A year in self-imposed isolation at home has left my driving skills a little rusty.

With that in mind, last weekend I joined a group of my fellow members of the San Diego Miata Club (SDMC) for a spirited drive through San Diego County’s back country. Given the date in March, our drive was aptly named the “St. Patrick’s Day Run.”

I hope that you enjoy my short, online video of my drive in my Miata (orange 2019 Mazda MX-5 Miata 30th Anniversary Edition) through the scenic Southern California back country. This scenery is a counterpoint to the stereotypical image of Southern California as a place of urban sprawl and a massive network of intertwined, multi-lane freeways.

The many lures of Mazda’s Miata include its fun-to-drive nature, sporty appearance (of all four of its generations), easy affordability — especially of the early generations, due to the fact that cosmetically- and mechanically-sound older examples can readily be found and bought. Of course, taking everything with you that you might prefer to take on a road trip has been getting increasingly difficult, as the Miata’s trunk size has been successively shrinking over the generations. I know — I’ve owned four Miata’s over the years (all but the first-generation model).

I’ve been an active member of car clubs almost as from the time I got my driver’s license (at age 16). Some members of most of those clubs, if not all, were active in grassroots (amateur) motorsports, including autocrossing and rallying. I competed in both.

My car clubs were, and still are, my ready source of friends, acquaintances and fun things to do. Until the coronavirus struck, I occasionally took wonderful, long distance road trips with the San Diego Miata Club.

On one such trip a few years ago, Miata owners from around the world converged on the Texas Motor Speedway for a major anniversary celebration of Mazda’s Miata.

My most recent of those trips was a couple of years ago to Arizona’s Grand Canyon — in part via Route 66.

The organizer of that road trip arranged in advance for a number of specific things for us to do, including taking a nostalgic ride on a vintage Wild West train— complete with six-gun-toting bandits on horseback, who stop our train and board it, walking through the train to ‘rob’ us and entertain us. The scheduled train goes from Williams, Arizona to the Grand Canyon in the morning, and returns in the afternoon. Before the trip starts, they perform a Wild West show on stage by the train depot. I highly recommend this. I’ve covered it — with photos, of course — in an earlier “AutoMatters & More”: drivetribe.com/p/san-diego-miata-club-road-trip-HdNlo7fqS2eOPtHeBSKlEQ?iid=OFtvKBZSRMGxOFt8kwwg8w

Many of the people in our Miata club, as am I, are retired but still active seniors. We have to be, as it has become increasingly difficult to get into our Miatas! With each successive generation, these cars should be getting larger, not smaller inside, but they have been getting better and better to drive. My 2019 30th. Anniversary Edition Mazda MX-5 Miata is definitely my best yet, cramped quarters notwithstanding.

Unfortunately, two of my fellow members of the San Diego Miata Club died of COVID-19 this past year. I have wonderful memories of one of them and his wife on that drive to Arizona. I miss his cheery disposition.

For those of you who have not had the pleasure of going on a fun run with a car club, I heartily recommend that you join a club and do so. Do a Google search for car clubs in your area, and find one that aligns with your interests. Otherwise, get together with a group of your friends and organize trips behind the wheel. That is a great way to socialize and explore new places. Designate a sweep car to bring up the rear, to help stragglers stay on the route.

It helps if you have two-way radios. A couple of years ago our club recommended the BaoFeng UV-82HP High Power UHF and VHF radio. That is not very expensive, has decent range, is small, the included little whip antenna is sufficient, and it is easy to understand what people are saying.

If you have a radio, you do not need to refer to the printed route directions — especially useful if you do not have a passenger to read them. The lead car’s passengers can use their radio to tell everyone in advance where to turn; let people know when to pull over, stop and wait, in case the group gets split up; and share important supplemental information — like when there is oncoming traffic, with brief descriptions of the vehicles — important to be aware of on a narrow, two-lane, tree-lined, twisty road if you were contemplating pulling out and making a pass.

At one point we were warned that: “There’s a squirrel in the right lane. Watch out!” Alas, the driver ahead of me could not miss it. RIP squirrel.

Likewise, we were told about a fallen tree branch in the roadway. From time to time we were also advised about cyclists on the road, so that we could slow down and be extra careful as we drove around sharp, blind turns. Of course, your passengers also might enjoy using the radio to socialize on the drive with other members of the group.

Something else that I enjoy, and you might too, is taking point-of-view, imaged-stabilized, videos of these drives and then reliving them later. To do that I attach a high-resolution GoPro camera (4K Hero 8 Black) via a GoPro suction cup mount to the inside of my car’s windshield. This camera is small, so it does not block my view of the road, the two important buttons (power and start/stop) are easy to find and use, and the GoPro suction cup mount is secure. It has been on my Miata for several months and it still holds securely.

I must stress the importance of using a camera that has effective image stabilization. On my 2019 SDMC trip to the big Miata Reunion event at WeatherTech Raceway Laguna Seca, in Northern California, I made the mistake of thinking that mounting my small, point-and-shoot camera to the windshield would sufficiently capture our scenic drive up and down the California coast, and on the racetrack itself. Unfortunately, that camera did not have effective video image stabilization, so all of my in-car videos shook quite a lot. That experience is what prompted me to buy the GoPro.

After this short trip, I returned home with some entertaining video footage of my drive along some of San Diego County’s twisty back roads, from my point-of-view looking over the bright orange hood of my Miata. The sounds of the engine can be heard, as I rowed up and down through the gears.