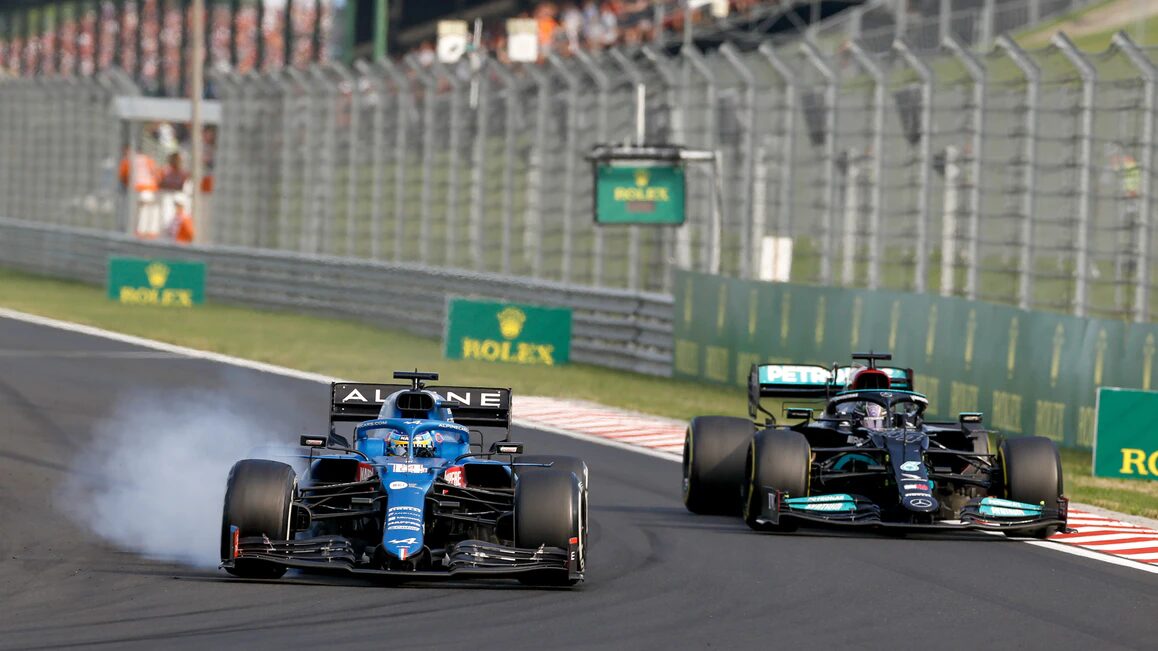 SHOULD EVERY FORMULA 1 RACE START ON A WET TRACK?

Some race series artificially manufacture competition during races, to make things more interesting for race fans. For example, fields may be bunched up and cars returned to the lead lap, after falling behind. In contrast, Formula 1 strives for pure racing, with very strict adherence to the rules.

After processional, uncompetitive Formula 1 races in recent years, due to the dominance of Mercedes, this season several teams have been in well-deserved contention for race wins.

The 2021 Hungarian Grand Prix was arguably the most exciting Formula 1 race that we’ve seen yet, in a race season that has already provided plenty of exciting racing action.

The track had been dry throughout practice and qualifying, but it looked like the race would start in the rain — the great equalizer, perhaps providing mid-pack teams and even back-markers with opportunities to shine.

As the result of a close qualifying session, Lewis Hamilton had earned pole position, to be joined on the front row of the grid by his Mercedes teammate, Valtteri Bottas. This was critical for Bottas, at a time in his career when he was fighting to continue driving for Mercedes. Rising star George Russell was waiting in the wings.

Max Verstappen had qualified on the second row of the grid. He was still the series points leader, despite getting crashed out of the previous race by Hamilton.

Sure enough, just before the start of the race it started to rain, but not yet enough to wash away the buildup of rubber from practice and qualifying. That made the track especially slippery.

All of the teams began the race on rain tires. At the start, Bottas spun his tires on the slippery track, dropping him back in the order. Hamilton and Verstappen both had good starts, with Lewis leading Max down the long straight, approaching the first turn. Behind them, other drivers took advantage of Bottas’ poor start, fanning out and passing him.

Bottas, in an effort to retake some of his lost ground, delayed his braking as he headed towards the first turn. Fast charging Lando Norris (McLaren) was on the inside, with Sergio Perez (Red Bull) on his left.

Bottas had misjudged his braking point on the slippery track and plowed into the back of Lando’s McLaren, punting him into Verstappen, who was slowing for the turn. Bottas, now completely out of control with a broken left front suspension, veered hard into Perez driving the other Red Bull.

Behind all of this, the melee continued. Some of the cars from the back of the grid had driven through unscathed, gaining positions nearer to the front, with Esteban Ocon (Alpine) advancing from eighth to first.

Crashed cars and debris were all over the track, bringing out a red flag that would stop the race for 15 minutes. Some cars were repaired as best they could be in the short time available, but the entire complexion of the race had changed.

Hamilton, still in the lead, remained on track with his rain tires for the standing restart, but the rest of the field — seeing that the track was drying, all drove into the pits before the restart to change to racing slicks. Perez’ day was done, as was that of Charles Leclerc (Ferrari) and Lance Stroll (Aston Martin). Verstappen’s car had significant damage, barely drivable.

Hamilton had no choice but to pit for slicks shortly after the restart.

Then he raced all the way from the very back of the field to finish third (elevated to second, following Sebastian Vettel’s post-race disqualification, due to a fuel-related rules violation).

In the closing laps of the race, Fernando Alonso — Ocon’s Alpine teammate — in one of his best drives ever, masterfully kept Hamilton (on fresher tires) from passing him for several laps. That probably kept Hamilton from his 100th career win.

Ocon ran a flawless race and won — for the first time in his F1 career. That was also the first victory for the new Alpine Renault race team.

I cannot foresee a day when Formula 1 would artificially spice up the show by wetting down a race track, but wouldn’t it be fun if they did?

To see the most photos and most recent text, and to explore a wide variety of content dating back to 2002, visit AutoMatters & More at AutoMatters.net. On the Home Page, search by title, topic or click on the blue ‘years’ boxes.