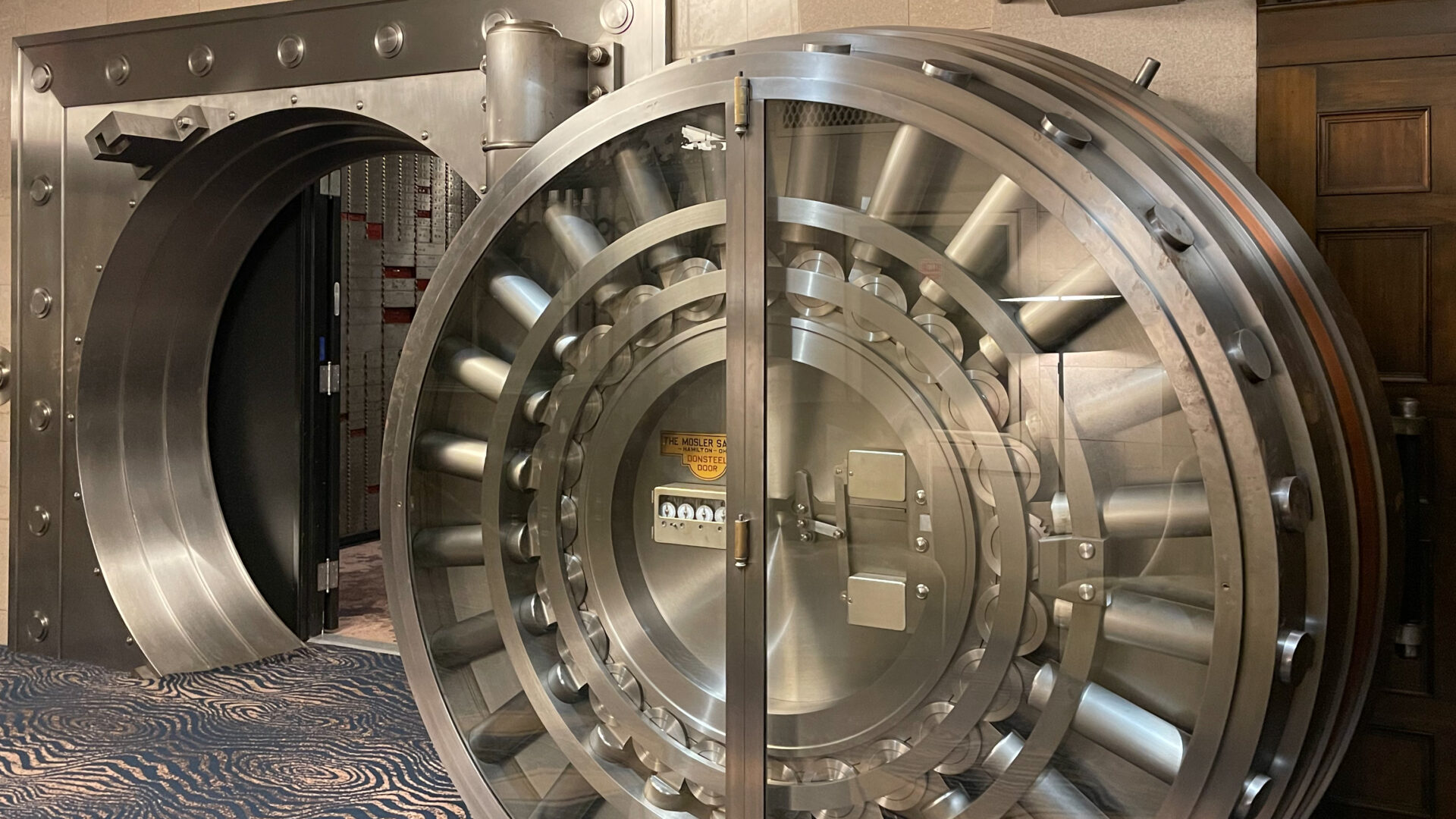 San Diego has long been known as America’s Finest City. Its mild, sunny weather and beautiful location next to the Pacific Ocean in Southern California, combine to make San Diego a favored destination for travelers from around the world.

As Wikipedia tells us, the history of San Diego dates back to 1542, when Juan Rodriguez Cabrillo landed in San Diego Bay and claimed the area for Spain. Many years later, on March 27, 1850, San Diego was incorporated as a city government (according to “A History of San Diego Government” on the City of San Diego’s website). As San Diego grew, tall buildings eventually gradually filled the downtown skyline.

One such building, built in 1928, is the former San Diego Trust & Savings Bank. It is listed in San Diego’s Historical Site Board Register. These days this building is a hotel named the Courtyard by Marriott, San Diego Downtown.

As I learned from a detailed history of the building that was given to me by Veronica—the gracious Front Office Manager who also gave me a tour–the architectural design of the building is Italian Romanesque revival. It was designed by William Templeton Johnson, a famous San Diego architect who also built the nearby County Administration Building, the La Jolla Library, and the Fine Arts Gallery and Museum of Natural History in Balboa Park.

The San Diego Trust & Savings Bank was founded in 1888 by Joseph W. Sefton, Sr., and this building continued in operation as the most prominent financial institution in San Diego until its closure fairly recently, in September 1996.

The grand lobby of the hotel has a towering, 32-foot-high ceiling, with original stenciling. The marble seen throughout the lobby was quarried from countries all over the world, including the United States, Greece, Italy, France, Great Britain and North Africa. The 35 columns around the lobby were created from 19 different types of marble brought to San Diego from the shores of the Mediterranean Sea. During the renovation of the hotel from its previous life as a bank, each marble piece was numbered, carefully removed, cleaned, stored and replaced in its original spot.

The bank’s upper 11 floors originally contained offices. Architect Johnson’s office and library were located in what is now the Presidential Suite.

A portion of the 14th floor was originally a shooting gallery! It was there that Mr. Sefton encouraged his tellers—especially the ladies—to practice straight shooting, in case of a bank robbery. Times were certainly very different way back in the 1930s—the time of Prohibition, and gangsters Al Capone and Bonnie & Clyde.

The cupola on top of the hotel, 240 feet above the street, was San Diego’s first aviation beacon. It was reportedly added to the original plans because the Seftons wanted this building to be the tallest building in San Diego.

In 1994, First Interstate Bank acquired the San Diego Trust & Savings Bank. It did business under that name for two years, until the bank closed.

The Courtyard by Marriott, San Diego Downtown opened on October 19, 1999 with 245 guest rooms, five meeting rooms and a historic landmark title. The cost to transform the bank into a hotel was $27 million.

The former bank’s safe deposit room has been preserved as one of the hotel’s most unique meeting spaces. When the bank closed, some long-time clients were so attached to their safe deposit boxes that they took the face plates. To honor their dedication, the hotel chose not to replace them.

The incredible vault door protecting the safety deposit boxes weighs 47,000 pounds and was manufactured by Mosler Safe Company in Ohio.

The hotel completed a $6 million revitalization in 2013 that included guest rooms, meeting space and all public areas. The focus was to incorporate a unique mix of old and new that seamlessly blends the bank’s historic design features with modern décor, to create a timeless allure.