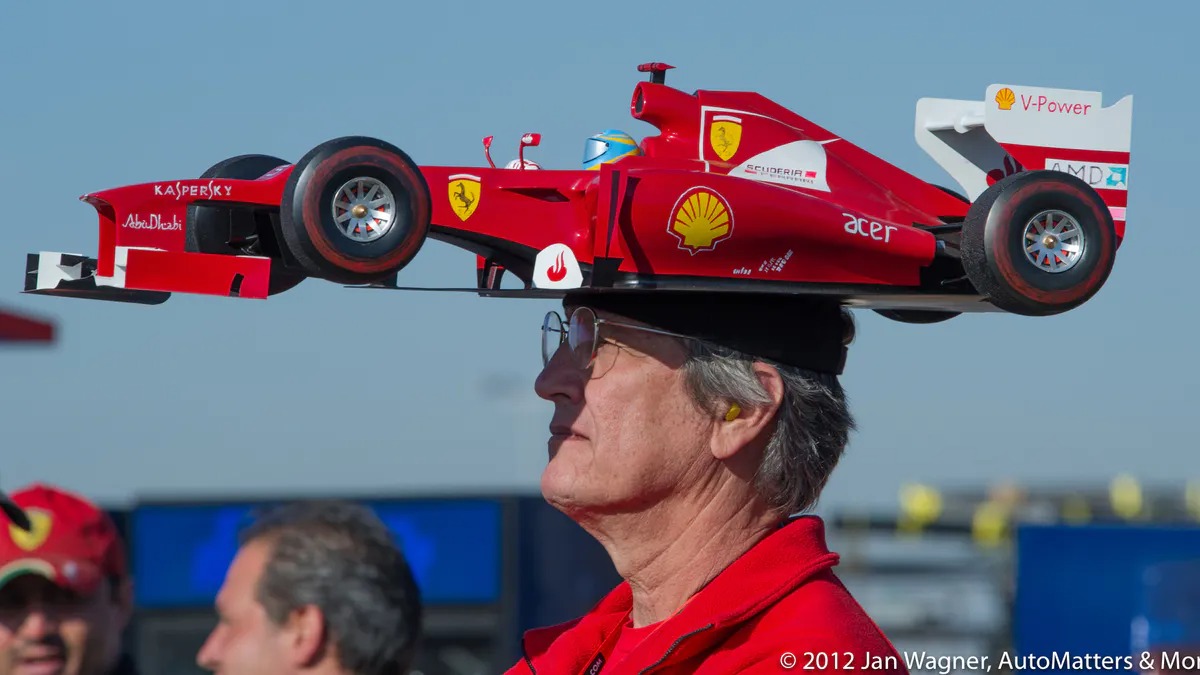 F1 fan at the inaugural 2012 United States Grand Prix at the Circuit of the Americas.

THE STATE OF FORMULA 1

There has been a fundamental change in Formula 1 auto racing. After decades at its helm, former F1 supremo Bernie Ecclestone is out as Chief Executive, and Liberty Media has taken over ownership.

For decades Bernie Ecclestone, a former race team owner who is now in his late 80s, had been instrumental in molding and shaping Formula 1 into what had become arguably the world’s preeminent auto racing series. While there can be little doubt about the technological superiority of Formula 1, competitiveness waned and the drivers were kept at too great a distance from their fans. The popularity of F1 suffered.

Now Bernie is little more than a concerned and vocal observer, as Liberty Media continues to institute sweeping changes at the races to make them more fan-friendly.

At the recent Spanish Grand Prix, a TV camera spotted a little boy wearing a bright red Ferrari outfit in the crowd. He was clearly despondent over the fact that his hero, Kimi Raikkonen, had just crashed out of the race. Seeing that TV feed, officials promptly made their way into the crowd and escorted the little boy over to the Ferrari compound, where he was introduced to Raikkonen. Visibly thrilled, he was given a team hat, and later he was seen on TV near the podium where he watched the awards ceremony. It was an incredibly emotional, human-interest story that made the news around the world, yet such a thing would have been unimaginable under Bernie’s iron-fisted reign.

On a larger scale, F1 EXPERIENCES are providing opportunities for new and unique fan access.

Tightening the performance gap among the various “power unit” manufacturers should greatly improve competitiveness among the race teams, which in turn should further stimulate fan interest. For several years Mercedes has been the dominant “power unit” manufacturer, followed by Ferrari and Renault, whereas the Honda-powered McLarens have remained woefully underpowered for the third year in a row, as Honda continues to struggle to overcome the technological challenges.

In the recent Canadian Grand Prix, after his McLaren’s Honda “power unit” failed yet again after he had used his considerable skill to race his way into a points-paying position, Fernando Alonso spontaneously climbed into the grandstands to give his racing gloves to the incredulous fans. This too was unimaginable in the Ecclestone era. Perhaps Alonso had felt empowered to do so after his eye-opening proximity to the fans during his participation in this year’s Indy 500.

McLaren has zero points this season. That is not in the best interests of the sport. Look for a Mercedes “power unit” in next year’s McLaren. If not they will probably lose Alonso, who is seeking another F1 World Championship.

Its promotional, cross-country U.S. road tour is wrapping up, and “Cars 3,” which I saw previewed yesterday in a theater filled with enthusiastic little kids, is about to open in theaters. Several times throughout the screening they cheered. Clearly, this film will be a big hit with kids. In anticipation of its popularity, store shelves are already filled with “Cars 3” toys and other merchandise.

Ever since I saw the first “Cars” movie, I have been a fan. Good fortune smiled upon me when Disney chose to build Cars Land freeway-close to my home, at Disney California Adventure in Anaheim. I go there often and enjoy strolling along the main street of Radiator Springs – a scene that appears several times in the new film.

“Cars 3” is fun with a great story, some new characters, unexpected plot twists, and incredibly realistic computer animation – especially when enjoyed in 3-D. Instinctively I kept ducking as bits of debris were sent flying. The racing scenes on superspeedways, and the personalities – including Darrell Waltrip – will be familiar to NASCAR fans.

After you witness the total mayhem of the Crazy 8 demolition derby, you’ll surely agree that must somehow be turned into another attraction in Cars Land – and it must include Miss Fritter.