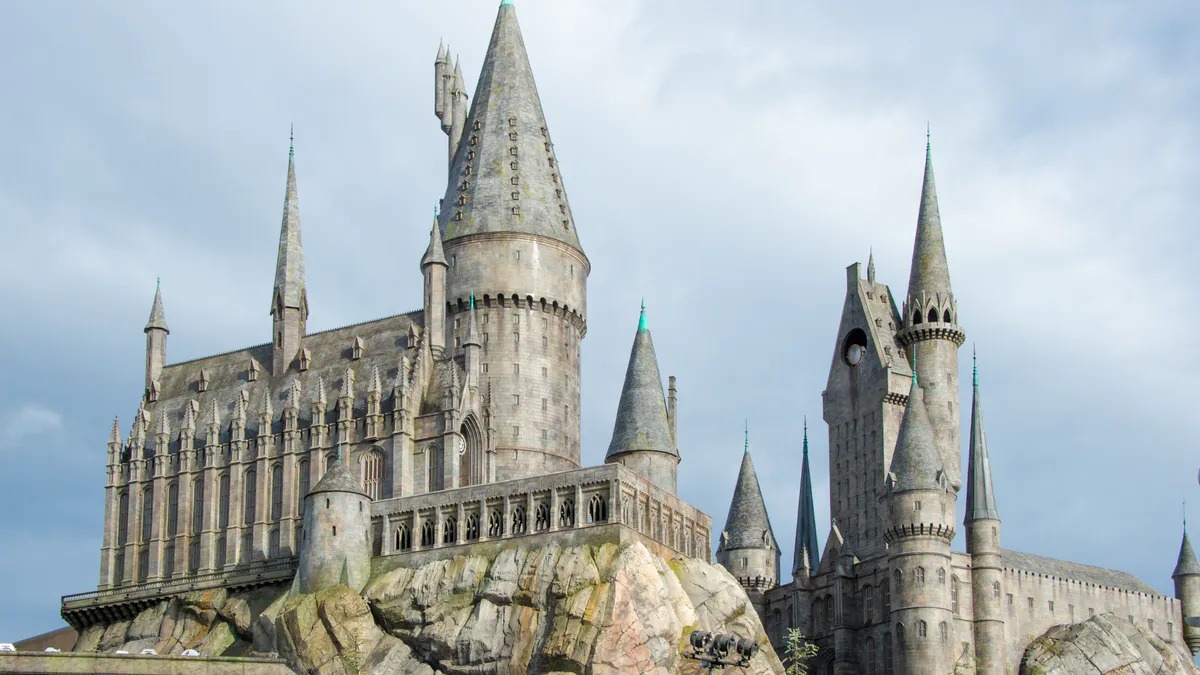 TRAVEL TO THE WIZARDING WORLD OF HARRY POTTER & MORE

After more than five years in the making, the wonderful, magical, “Wizarding World of Harry Potter” is open and welcoming guests from around the world.

Hogsmeade is a quaint, bustling, snow-capped village. The steaming Hogwarts Express locomotive sits in the station at the village’s entrance, as if ready to transport visitors here from the rest of the park. A rail car waits by the station for passengers.

Sip a refreshing, frozen Butterbeer as you explore the fascinating shops and themed dining places within. At Ollivanders you might be chosen by an interactive wand, whose spells will bring life to all sorts of things in the magical shop windows. For lunch I recommend the hearty beef, lamb and Guinness stew, served in a bread bowl in the traditionally British “Three Broomsticks” tavern.

Enjoy watching the talented performers in the Frog Choir and the Triwizard Spirit Rally, and take a ride on the “Flight of the Hippogriff” – the park’s first outdoor roller coaster.

Showcasing the absolute state-of-the-art in robotic ride systems, and definitely not for those with queasy stomachs or the timid, “Harry Potter and the Forbidden Journey” is a technological and creative tour de force.

Located inside the massive, dark and imposing Hogwarts castle, incredibly detailed rooms and corridors lead to the land’s cutting edge, state-of-the-art signature ride. It features frightening creatures, thrilling filmed action sequences in 3-D, sound effects and narration. You will speed along going forwards and backwards on your broomstick, banking, soaring, diving and even turning upside down as you dodge obstacles in your path and follow Harry Potter. This is the most intense ride that I have ever experienced.

“The Wizarding World of Harry Potter” stimulates and challenges the imagination, and bridges the generation gap. Children who grew up devouring the books have carried their enthusiasm and love for them into adulthood. To learn more about this land, visit www.universalstudioshollywood.com/harrypotter/.

This colossal new undertaking represents the culmination of over 50 years of effort, talent, passion, imagination, attention to detail, whimsy, exceptional execution and a top-to-bottom, sincere dedication to providing welcoming and appreciative guest experiences. I did not read this in any of their literature. Rather, I experienced it personally and repeatedly. It must be their culture because everyone who I’ve met or communicated with – from the most senior managers to the helpful food services people, shop sales staff and ride attendants, they have all made me feel like they genuinely appreciate my presence and interest in the park (Tip: If you feel a bit queasy on the “Harry Potter and the Forbidden Journey” ride, breathe from the cooling jets of air above your head).

For over 50 years Universal Studios Hollywood has been bringing images on the silver screen to life, stimulating all of the senses in ways that only being there can, enabling conversations with the characters, experiencing familiar adventures and creating brand new ones. These transcend mere words and images, expanding boundaries and adding to the narrative.

Thinking back to my own first visits to Universal Studios Hollywood many years ago, one oddly enduring memory is of a huge, black, rotary-style telephone – a prop from Irwin Allen’s “Land of the Giants” T.V. series. It was big enough to climb on, just like the characters from the T.V. show might have done.

One of the best and most enduring attractions is the iconic Studio Tour. Guided trams take you through the backlot so that you can experience first-hand some of the magic of Hollywood. Since this is a working studio, while you are on the tour you might be asked by your tour guide to be quiet while you observe actual productions that are underway.

As technology has continued to evolve, and popular new movies and T.V. shows have claimed their rightful places in the current popular culture, some of the older attractions on the Studio Tour have been replaced. I particularly miss the “Ice Tunnel.” A Google search will let you see how this worked, but basically trams filled with theme park guests drove through a slowly rotating cylinder. The optical illusion made it feel like the tram was rolling over on its side.

Hold on tight as you watch the battle between King Kong and a towering dinosaur (in 3-D), because your tram will be shoved around.

Elsewhere on the Studio Tour, you’ll experience a sudden rainstorm and flash flood in old Mexico;

A calamitous earthquake, fire and flood in an underground subway station (this is California, after all);

And if you do not get wet here, perhaps you will in Amity Village as a large great white shark, its jaws wide open, leaps out of the water right beside your tram!

“Fast & Furious Supercharged” is the latest major addition to the Studio Tour. Located in a purpose-built, 65,000 square foot building on the backlot, and serving as the tour’s finale, the tram drives along beside a star-studded, action-packed car chase, while you watch it all unfold in 3-D.

On selected evenings you can take a nighttime Studio Tour, complete with dramatic studio lighting and sound effects (see the website for dates).

“Jurassic Park – The Ride” begins with a deceptively tranquil boat ride past docile dinosaurs. Without warning other, aggressive dinosaurs attack the jungle compound and it gets very dark – too dark to see and prepare yourself for what is about to happen next.

Suddenly your boat drops out from under you and you plummet down in a steep, terrifying, freefall drop until your boat splash lands into the water below.

Universal Studio’s long-running “WaterWorld” stage show is arguably one of the most popular theme park attractions of all time, with performances at several of its theme parks.

The audience is seated in a stadium that faces a bleak, post-apocalyptic vision of the future, where the polar icecaps have melted and water covers the land, forcing the people to live on floating islands made of rusting scrap metal and the derelict remains of ships. Most of the ‘stage’ is a large body of water. This action-packed stage show features fiery explosions, speeding boats and Jet Skis, fights, stunt falls from great heights and even some golf!

A surprise arrival in the finale will leave you speechless and amazed.

Dining at Universal Studios Hollywood is an entertaining experience too. In addition to the “Three Broomsticks” in Hogwarts,

Check out the new choices in “Springfield,” home of the “The Simpsons.” The spacious, two-storey addition to the park accurately captures – with numerous authentic details – the heart and soul of the iconic animated TV series. Head upstairs, where you can actually dine on a pool table.

Familiar landmarks include the nuclear power plant, Duff Brewery Beer Garden, Springfield prison – with a jailbreak in progress, and Springfield Elementary School. Enjoy a Lard Lad donut, pose for a photo with the Simpsons and ride “The Simpsons Ride,” where the waiting area is half the fun.

With so much to see and do, Universal Studios Hollywood is an incredible entertainment value in the heart of Southern California. Add to everything else a variety of restaurants and shops in the adjoining Universal CityWalk, easy freeway access, plenty of parking and a great location, Universal Studios Hollywood is billed as “The Entertainment Capital of L.A.” For more information, visit www.universalstudioshollywood.com.