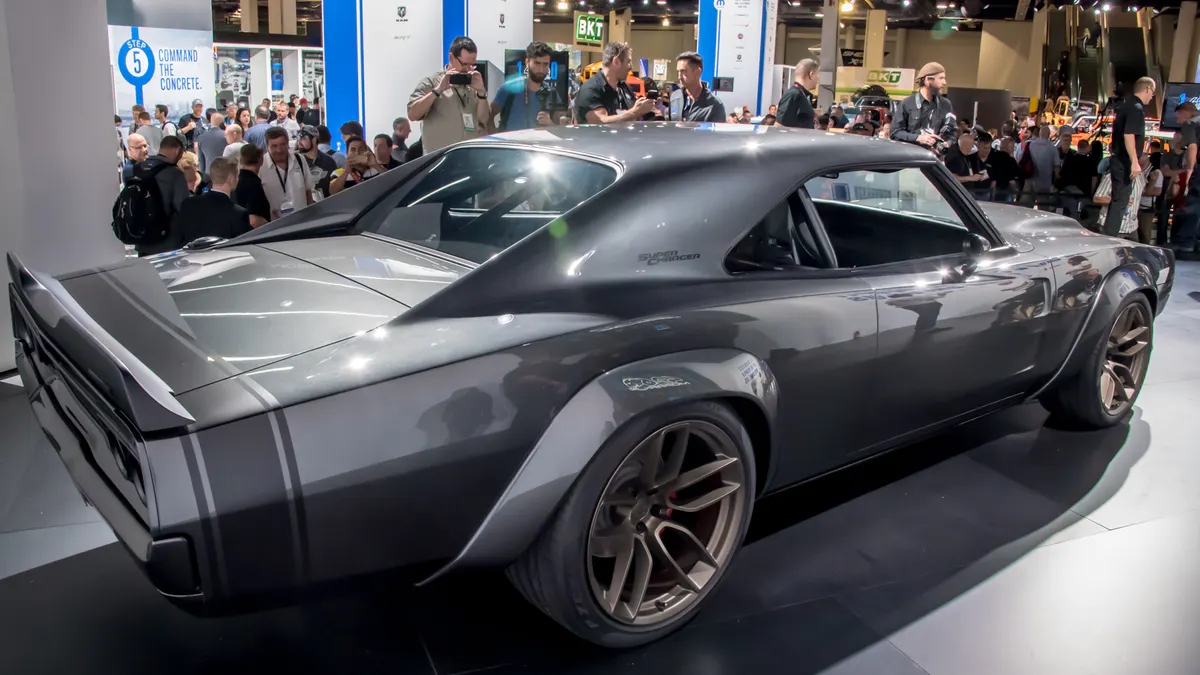 Those of you who regularly read “AutoMatters & More” know that in addition to covering the big story, I also tend to go where most of the other journalists do not go – often after-hours, when most of the other journalists are either long gone or are in the deadline press rooms writing up their coverage. As a result, I sometimes see and cover what they do not see. What you are going to read about and see photographic proof of, at the end of this article, is a perfect example of that, but first I’ll tell you about Mopar’s big SEMA Show press conference.

I recently returned from a week in Las Vegas, most of which was spent covering the annual SEMA Show. This international show – one of the largest held in Las Vegas – is a trade-only event to enable “automotive specialty equipment manufacturers to display alongside automotive manufacturers to debut new, innovative products, and connect with industry buyers from all over the world.”

Included in exhibitors’ booths and throughout the convention center are approximately 1,500 feature vehicles. Immediately after the SEMA Show ends, and for several hours, many of these vehicles can be enjoyed from grandstands, as they drive (or, in some cases, are pushed) from the Las Vegas Convention Center in the annual “SEMA Cruise.”

The cruise ends at “SEMA Ignited,” the official SEMA Show after-party that is open to SEMA Show attendees and the public alike.

It takes something really special to stand out in the crowded field at the SEMA Show. This year, a concept car based on the iconic 1968 Dodge Charger did just that.

This stunning, one-off concept celebrated its namesake’s 30th anniversary as the featured vehicle in the annual, standing room only press conference at the large FCA (Fiat Chrysler Automobiles) Mopar exhibit. While retaining a strong resemblance to the 1968 original, the Dodge “Super Charger” concept was thoroughly modernized with elements from the current Dodge Charger SRT and the Dodge Challenger SRT lineup, all to showcase the other elephant in the room: Mopar’s new “Hellephant” 426 Supercharged Mopar Crate HEMI engine.

In addition to the engine that was in the car, another “Hellephant” was on display on the stage in a see-though crate, but it was not just there for us to see. They actually started it and revved it up, to the accompaniment of appreciative whoops and hollers from the audience.

The “Hellephant’s” block is all-aluminum, for light weight. It is used in Mopar Dodge Challenger Drag Pak race vehicles that dominated the 2018 NHRA Factory Stock Showdown class. It was configured for the street in close collaboration with Mopar and SRT engineers from the motorsports world. Mopar tells us that installation is almost turnkey with the “Hellephant” 426 Supercharged Mopar Crate HEMI Engine Kit.

The “Super Charger’s” exterior is finished in an understated “De Grigio” grey metallic paint. Fresh air is fed to the “Hellephant” through a supersized hood scoop modeled on that of the Dodge Challenger SRT Demon. A distinctive “Hellephant” logo is on the gas cap and elsewhere. Whereas the 1968 Charger had pop-up headlights, this concept’s Dodge Charger SRT Hellcat headlights shine from behind the grille. The original front door vent windows are replaced with one-piece side glass, with side mirrors from the 1971 Plymouth Duster.

Body colored fender flares on the significantly lowered car produce an aggressive “wide body” look. The front wheels are pushed forward, extending the wheelbase by two inches (to 119) and reducing the front overhang, which contributes to a longer, lower appearance. The rear wheels are custom-milled 21 x 12-inch aluminum Devil’s rims, to match the appearance of the stock 20 x 11-inch Devil’s wheels at the front, from the Challenger SRT Hellcat. Brakes are 6-piston Brembos.

Look closely to see that pairs of straight pipes emerge from within the rear taillights. An air gap between inner and outer pipes keeps them cool to the touch.

Inside, the custom 2-inch rollcage matches the side windows opening.

While the car is a concept, customers will be able to purchase its engine. The “Hellephant” will be available in the first quarter of 2019. For more information on this and other Mopar Crate HEMI engines, visit www.cratehemi.com.

Now here is the unbelievable scoop that I promised you. At the end of the final day of the SEMA Show, as I and a group of random strangers walked away from “SEMA Ignited,” we were both shocked and delighted when we came upon the one-of-a-kind, perhaps near priceless “Super Charger” parallel parked and with windows open, unattended, on the mostly dark street between the convention center’s South Hall and the First Time Exhibitors’ tents, as fork lifts sped back and forth moving large, heavy, wooden shipping crates. It’s true! You can see for yourself. The photos do not lie.

Soon however, someone responsible for the car arrived. I expressed my shock that it had been left this way. In response he told me that the people who were charged with caring for it had left to go to dinner. Incredible.

Then it was driven away, past the rapidly emptying exhibit halls, into the night. You can see video of that here:

As always, I look forward to hearing from you in the comments below.