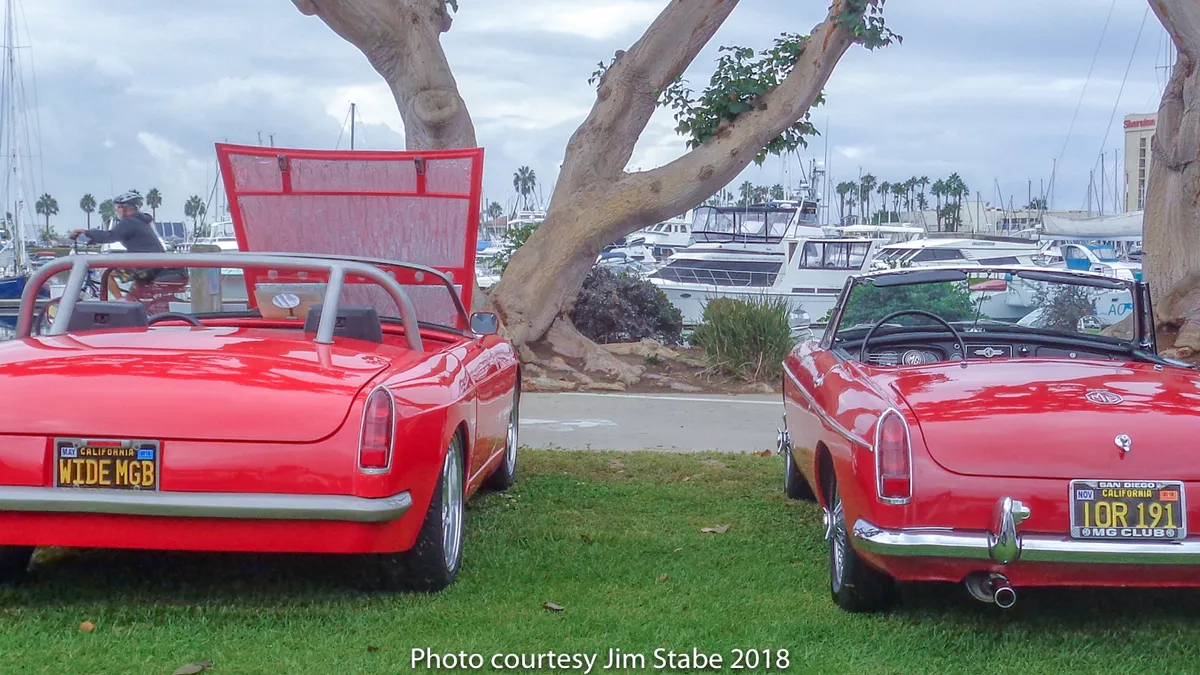 
From the get-go the enormous scope of what this project would ultimately become was insane, but Jim Stabe likely had no idea of what he was setting himself up for when his 1966 MGB custom car project began. Fortunately for us he stuck with it and had the imagination, creativity, technical expertise, fabrication skill and sheer determination to pull it off on his limited budget, because the result is a truly one-of-a-kind, marvelous car. It is one man’s brilliant realization of what a classic 1966 British sports car can become when it is almost completely re-engineered for high performance, high style and wind-in-your-hair, top-down driving.


This project’s probability for success at its outset had to have been somewhere close to zero, given the very limited resources at Jim’s disposal, but the beauty of an individual embarking on a project such as this is that we do not know what we do not know, so we may soldier on. The odds against him succeeding had to be astronomical. This project typically would require the participation and considerable resources of a major car customizer – perhaps Chip Foose or West Coast Customs, with their teams of highly skilled personnel, specialized equipment and a large budget. That someone could successfully pull this off by himself in their garage was highly improbable, and yet that is precisely what Jim Stabe has managed to accomplish over a period of many years.


The story of this particular MGB began in 1971, when Jim Stabe got out of the U.S. Navy, but its genesis can be traced back several years earlier and to another car. He had owned a 1964 MGB in college, using it for daily transportation. He had heavily modified it for autocross use – complete with race tires and a high compression engine.


After he joined the U.S. Navy he drove his ’64 MGB to Pensacola, Florida, where he parked his pride and joy. There, while he was fully occupied with his initial duties in the Navy and having no time off, his MGB suffered the wrath of a particularly bad and sustained Florida rainstorm. The lot where his car was parked flooded and his car sat there for weeks. As he marched nearby every day, he could see his MGB sitting in two feet of water, but there was nothing that he could do. By the time he was able to get some time off, its interior was full of mold, and its engine and gearbox were full of water. He had to scrap that car.

When Jim got out of the Navy, the Datsun 240-Z had just been introduced. He wanted to buy one of those but at that time the car was so much in demand that the dealer he was working with wanted to charge him a big premium for “Dealer Prep.”


Instead, he decided to stick with what he knew and liked. He found and purchased a very well kept, one owner, 1966 MGB in British Racing Green. That was the car that ultimately evolved into what we see today.


Jim followed many paths trying different things, learning what worked and did not work, what he liked and what he wanted to improve. Countless modifications were done to make things function and fit properly. Along the way he installed, and subsequently upgraded and replaced, components large and small, and he improved his skills.


His first modification was to pioneer the installation in his MGB of a Buick 215 cubic inch, all-aluminum engine from the 1961-63 Buick Special, along with a Muncie 4-speed gearbox and a Jaguar XKE Independent rear suspension. This engine became the basis for the MGB V8 developed by Ken Costello and produced by BMC in the early 1970s.

He drove it that way for 15 years, eventually replacing that engine with a turbocharged Olds F-85 Jetfire powerplant. Unfortunately, the front end of the car was damaged in an accident in 1983. Jim retired the car, selling the drivetrain but keeping the body.


Jim’s wife eventually asked him to either do something with the MGB or get rid of it, so in 2001 Jim chose to resurrect his MGB as a custom wide body, V8-powered car, doing all of the work himself except for the upholstery. He said he was “self-taught, did a lot of reading. It DID take me 17 years.”


Even though less than 250 pounds of the original MGB metal remains, it was important to Jim to keep the car recognizable as an MGB. Styling cues that he wanted to preserve included the body side reveal (which often gets obscured with fender flares), hood, headlights, taillights, bumpers and grille.


Jim’s decision to install a C-4 Corvette suspension that he sourced from a rollover wreck, since it had very good geometry and forged aluminum components, meant that he would have to significantly widen the MGB. This suspension was much too wide to fit under the MGB bodywork.

Using a 12-inch blade in a Sawzall, he cut the car in half the day after Christmas of 2000, moving the sides apart until it looked about right with the suspension, wheels and tires.

Cutting the car in half to widen the body was just the beginning. He spent the next 17 years putting it back together again! Here are some of the major challenges involved in this build.


The stock MGB body shell is a strong, rigid, unibody monocoque made entirely of sheet metal, but since Jim was increasing the horsepower and torque to above 500, and widening the structure 11 inches by cutting it in half, he felt it was necessary to further increase the strength and rigidity of the monocoque structure.


Noting that the Lotus Elan utilized a backbone frame structure to provide a strong, rigid platform upon which to mount the powertrain, suspension and fiberglass body, Jim used tubing to fabricate a similar backbone frame for his MGB, increasing the stiffness and providing the means to mount the V8 engine, 6-speed transmission, and C4 Corvette front and rear suspension pieces.


– Fabrication of a backbone frame


The fabrication of the rear fenders began with the inner wheel tub. The fender top section was done in three pieces and, once shaped, allowed the outer portion of the tub to be trimmed. Once trimmed, the vertical portion of the inner tub was fabricated and the wheel opening created.

The horizontal body reveal line was created in the upper part of the fender, which was welded into place. The lower fender was formed in two pieces and welded in place. The outer and inner fenders were flanged and attached together with spot welds.

The transmission tunnel is double-wall sheet steel welded to a 1-inch tubing tunnel structure, with urethane foam sandwiched between the sheets. The exhaust pipes are routed through the transmission tunnel, to provide ample ground clearance and excellent insulation from heat. The cockpit stays comfortable to the touch, even with the exhaust 2 inches away from Jim’s feet. He said he could drive it with bare feet even before the carpeting was installed. The bottom of the car is completely flat.


The new sheet steel floorboards were fabricated and installed 1-1/2 inches lower than the stock floors, which lowered the seating position in the car.


The cockpit surround has a rolled edge similar to that of an AC Cobra’s. This car is a total roadster with no top, windows or door locks. The rear 7-inch portion of the original cockpit was covered with steel, eliminating the useless body opening behind the Corvette seats.


The front valance assembly mounts and ducts air into the radiator, provides mounting points for the front bumper, locates the grille and extends the flat underside of the car to the lower edge of the air dam.


Jim knew from the outset that the curved, wide, speedster-style windshield was going to be his biggest challenge. He had been looking for months, but most windshields are really pretty flat compared to an MGB’s, and not wide enough for this custom wide body MGB.


Then one day, by chance, he was having lunch at an outdoor café across from work when a 1967 Impala convertible drove by. Its windshield looked wide enough, and as it passed directly across from him, he could see that the glass had a significant curve as well. He followed the Impala into the parking lot, where he got permission from its driver to take a few measurements. It indeed was wide enough, and it had more curvature than he had found on anything so far. He bought a windshield and began to work with it.


First he made a Masonite copy of the windshield’s curvature. To do this he soaked the Masonite for a couple days and then placed it, weighed down, on the inside of the glass. After it dried it had taken on the exact shape of the glass. He reinforced the Masonite with wood backing, so that it would retain its shape, and then he began to trim it to fit the contour of the car’s cowl, sweeping back 14 degrees – steeper than the stock windshield.

He used the Masonite pattern to mark the glass for cutting, which he did using a tool with a 1/8″ diamond cutter and water spray. Cutting the glass took several hours. The edge was cleaned up using a sander with a tungsten carbide belt.

The hood is a massive piece and was very difficult to get straight and flat. Its frame is made from tubular steel. A total of nine pieces of aluminum make up its skin – a combination of stock MGB aluminum hood pieces and fabricated aluminum pieces, TIG welded together. The center section was fabricated on an English wheel, to match the contour of the stock hood pieces.


After the skin was completely welded and the welds dressed, the entire skin was again run through the English wheel to finalize the curvature of the panel.


The hood hinge was patterned after BMW hinges that allow the hood to rock up and forward, before being tilted up to the vertical. A simple hinge could not be used, since the front of the hood is curved and it sits on top of the grille. That ruled out simply hinging the hood at its front corners.

The grille is one of the styling cues that makes the car recognizable, but take a closer look at the logo within the familiar octagon and you will see GM, instead of MG – a nod to the GM V8 engine. The grille was difficult to fabricate due to its many subtle curves and angles. The thickness of its upper tube had to be increased from the stock dimension to maintain a proportional look. The grille is also structural, since the hood latch and release mechanism are attached.

– Note the GM logo on the grille, a nod to the car’s engine.


Jim says his MGB is a hoot to drive!

As always, I look forward to hearing from you in the comments below.