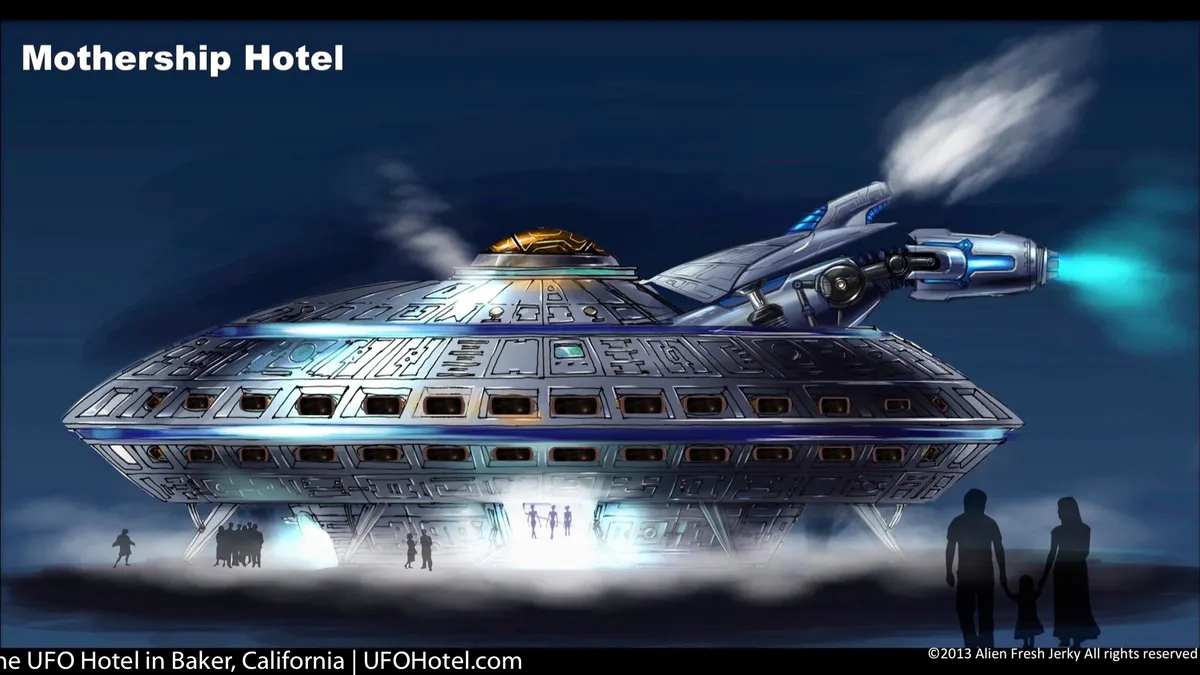 Do you believe that aliens are here? Recently I had an alien encounter of the first kind in the California desert, as I drove back towards San Diego from Las Vegas, after covering the SEMA Show.

I’d pulled off the highway to rest in a town called Baker (California) when I came across the most amazing sight. There, in the middle of nowhere, in the dark of a Sunday night, was a towering, brightly colored and lit, alien robot sign.

Next to it was a large, alien-looking land vehicle.

In the window above its entrance, three aliens were seated, looking out. One appeared to be motioning towards me, so I ventured inside.

Inside the large shop were alien- and space-themed souvenirs, as well as a large display of Alien Fresh Jerky, along with specialty sodas and other tasty treats.

Seated on a bench was another alien, compelling me to sit for a photograph.

A gentleman approached me, expressing curiosity about why I was taking pictures. I explained that I am a journalist and that I wanted to share this incredible discovery with you, my audience.

He introduced himself as Luis Ramallo. He is the creative visionary and proprietor – along with his family, including son Martin – of this fascinating establishment.

Luis showed me a professionally rendered book of concepts, revealing that this will be a fully immersive, alien-themed, major tourist attraction.

Its centerpiece will be the alien-themed U.F.O. Hotel, with a much larger hotel to follow. Outside, it will look like a spaceship.

Inside, each of the 30 guest rooms will be a unique, custom designed space from floor to ceiling to contribute to the hotel’s aliens and space theme, with a reactor room, deep space room, weapons room, cargo bay room, landing party room and more.

There will be a ticketed tour through the spaceship, time traveling experiences, marriages in virtual space, a gift shop, a restaurant and much more – all themed, with viewing ports (video screens) in the hallways, aliens and special effects. This place will absolutely blow you away.

There is more property available for future development, and it is conveniently located freeway close to the I-15, just south of the Nevada border. 50-60 million tourists and business travelers drive by every year, between the major metropolitan centers of Southern California and Las Vegas. Almost one million per year already stop at Alien Fresh Jerky. With the hotel, expect that to double. This is brilliant, and it will really put Baker on the map.

This began almost 20 years ago, with a small shack selling jerky on the side of the road near Area 51, yet the name “Alien Fresh Jerky” did not originate from Area 51. Luis had been stopped by a traffic officer who asked him for his driver’s license and green card. Luis’ realization that he was a registered alien is what gave him the idea for the name “Alien Fresh Jerky.”

Even though it was popular, Luis’ roadside jerky business near Area 51 only lasted for four months before they kicked him out. That was fortuitous because, in 2002, that led to him stopping for gas in Baker, California. He noticed a sign on an old building that read “For Sale or Lease,” “so I just turned around, and stopped my truck right there – it was all dirt, you know.”

“The minute I stopped I had a vision. I saw the hotel and I saw the business. I just saw it. I drew a picture of what I saw, and then I talked to my wife. I said I found a place. She said are you sure? Basically she was telling me I’m crazy!”

People probably thought Walt Disney’s vision for Disneyland was crazy too, and we know how that turned out.

At first they rented, and the next year they purchased the property. With limited financial resources, they’ve done much of the work themselves.

Have no doubt, this alien theme park is for real. Luis hired experienced amusement park professionals to help make his vision a reality. Plans have been approved and building permits issued. The site is cleared and several alien-themed support buildings are already built. Hotel construction should begin in January 2019.

As always, I look forward to your comments and suggestions.