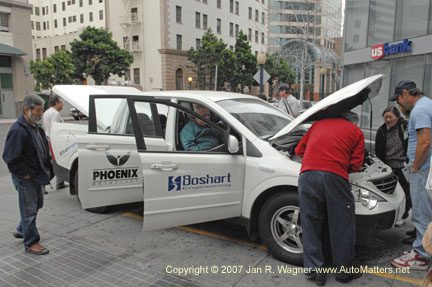 Due in part to the runaway popularity of gas-electric hybrid vehicles, including Toyota’s Prius, people are keenly interested in learning about new developments in battery technology and also about vehicles that use unconventional powertrains in order to reduce our dependence on fossil fuels. In January, 2007, the Prius Club of San Diego organized a joint presentation about this by Altairnano and Phoenix Motorcars. That brief but interesting introduction compelled me to dig further into what they had to tell and show us.

Altairnano, as the company’s name implies, claims to be “an innovator and supplier of advanced ceramic nanomaterials.” I don’t know about you but to me that sounds like something straight out of a science fiction movie. What are nanomaterials and why should I care? It took some research into their 2005 annual company reports and some of their other printed and online materials to figure out answers to these questions. This quickly got quite technical and, to my non-scientific layman’s mind, quite convoluted. I’ll spare you that and an introductory science lesson or two, and cut right to the chase.

Nano refers to extremely small size, as in nanomaterials. Altairnano has developed nanomaterials for use in a wide variety of industrial products, including high performance rechargeable batteries.

As they wrote in their “advanced materials and power systems” brochure, there are several limitations of conventional rechargeable batteries that significantly limit their usefulness as a power source for electric vehicles. “Those challenges include a long recharge time, short cycle life, poor operational safety and no tolerance for extreme temperatures.” I have little doubt that is why hybrid gas and electric vehicles are on the road today, instead of all-electrics like the gone and much lamented General Motors EV1.

The great news is that this may be about to change. Altairnano, using their nano technology, claims to have developed rechargeable batteries that address these shortcomings. Advantages include: “no operational safety issues,” “three times the power of existing batteries,” “a one-minute recharge,” “high cycle life—10,000 charges versus 750 for existing batteries” and “low life-cycle costs.” If you are interested learning more about these major developments, a good place to start would be to visit Altairnano at www.altairnano.com.

As reported on their website, this technology is literally about to hit the road. While there I spotted a photo taken on Feb. 23, 2007, of what looks exactly like the vehicle that I took a ride in about a month earlier on an uncharacteristically overcast day in downtown San Diego. That one was pictured on the South Lawn of the White House. Inspecting it was none other than President Bush.

This vehicle was imported and significantly revised outside, inside and underneath by Phoenix Motorcars of Ontario, California. It was one of two similar vehicles that, according to Phoenix’s preliminary literature, will be “powered by a revolutionary Altairnano NanoSafe™ battery pack.”

At first glance it looks like a stylish but conventional crew cab pickup truck (SUT). A second version will be an SUV.

Both will be zero emission, all-electric vehicles that “can cruise on the freeway at up to 95 m.p.h. while carrying up to 5 passengers. The SUT has a payload capacity of up to 1,000 lbs.”

My ride in the SUT revealed several things. Its passenger compartment accommodates adults comfortably. If I didn’t already know that it was a new vehicle, I would have assumed that it was simply another offering from one of the major automobile manufacturers already established in our market.

It rides nicely and performs well on the road. The only difference is that it is very, very quiet.

Not using an internal combustion engine can do that, as Toyota’s Prius regularly demonstrates when it is running on battery power alone. Something else that is soon evident is that this vehicle has plenty of torque, which translates to quick acceleration. Again, that is another characteristic of electric vehicles which I have observed with the Prius.

The preliminary Phoenix specification sheet includes recharging data. Using an “Off-Board High Power 250KW Charger,” recharging will take “Under 10 minutes.” The “On-Board Vehicle 6.6KW Charger” has a charging time of “5 to 6 hours.” Using that method would seem to be better suited to recharging overnight, or at work during the day.

Phoenix’s stated intention is to introduce this vehicle to selected customers early in 2007. They plan to produce at least 500 zero emission, all-electric trucks in 2007. The SUV model will be introduced in late 2007. The full release will follow in 2008.

Vehicle orders are being taken now. For more information go to the Phoenix Motorcars www.phoenixmotorcars.com website.

While you are at their website be sure to watch the video of President Bush being introduced to the Phoenix SUT, as well as to a Toyota Prius modified to operate as a plug-in hybrid. He said that he has met with people who are working in these and other areas, including the production of non-corn based ethanol, to learn more about the various technologies. He did this in order to make sure that he has set not only a necessary but also a realistic goal of reducing gasoline usage by 20% over a ten year period. He concluded that he is absolutely confident that we can and must achieve this goal.