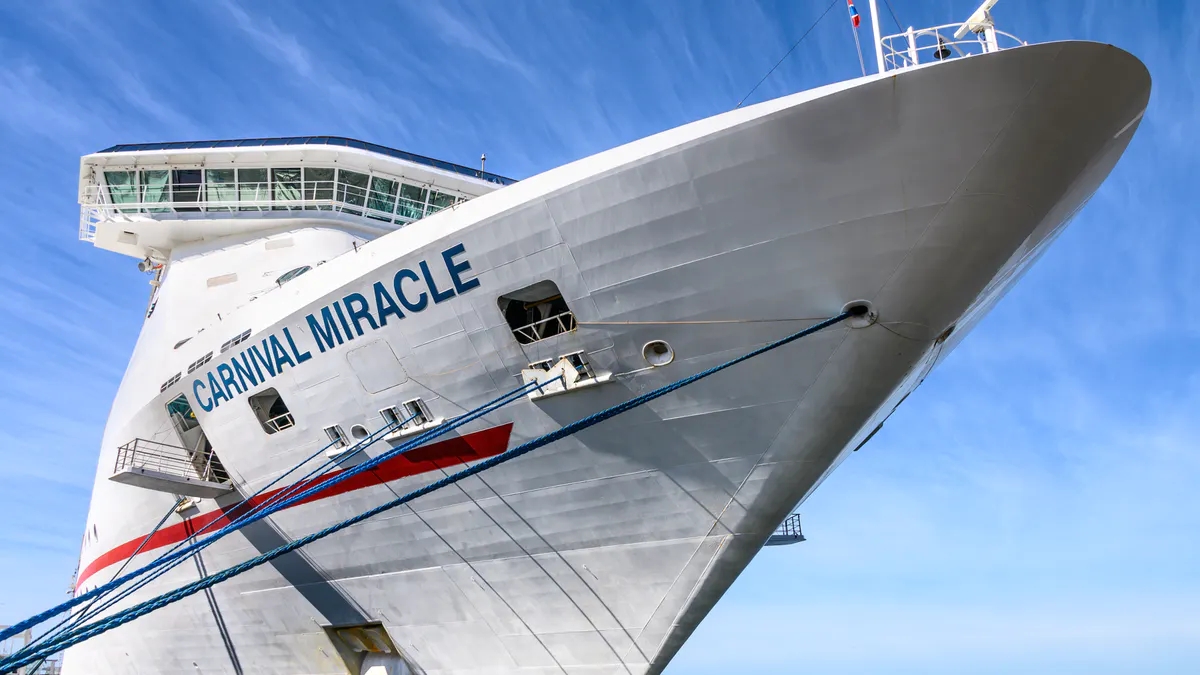 T​he Carnival Miracle at the Port of San Diego, California

Today’s cruise ships are truly floating luxury hotels. On board they typically offer a variety of activities and entertainment, ranging from world-class stage shows, informative classes and lectures, shopping and friendly competitions that promote interaction and light-hearted rivalry amongst the passengers, while others simply relax and soak up the sun poolside.

It seems as if fabulous dining opportunities are presented non-stop, from early in the morning to late at night. Fortunately, the large cruise ships offer plenty of room to walk off the calories.

The ships sail to a variety of interesting ports of call, where the passengers can take shore excursions or simply explore on their own. Afterwards they return to their ships to eat, be entertained and rest up for the next day’s adventure.

For far too long – seven years – Carnival Cruise Line has not had regular sailings from the Port of San Diego. That situation changed recently with the arrival of the Carnival Miracle cruise ship, its inaugural visit.

To celebrate its arrival and the Carnival Cruise Line’s return to regular service at the Port of San Diego, a traditional plaque exchange ceremony was held on board the vessel.

Shortly thereafter a live mariachi band and the ship’s crew welcomed aboard 2,360 passengers on this, a sold-out sailing that would soon be making its way south, along the coast of Mexico.

After the ceremony, we were given a tour around the ship.

I wish that I could have remained on board but the crew kept a pretty close eye on us, making it impossible to stow away. It should not come as a surprise to you if you find me covering a cruise in the hopefully not-too-distant future. I am more than ready to go again! However, for now, it was time to leave.

The already visitor- and resident-friendly Port of San Diego is undergoing a massive, multi-year redevelopment project. In addition to the floating museums, tour boats and restaurants, there are public spaces – with more to come. I discovered that on Sundays there is a marvelous STREET FOOD MARKET located directly across the street from where the cruise ships dock, at the corner of Harbor and Broadway.

On Sundays a carefully selected variety of food vendors – the best of their respective specialties, based on popularity – prepare delicious offerings. I was hungry so I tried two.

The first was a traditional Spanish seafood paella prepared fresh in small batches by Antonio Delgado at “VIVA paella.” Long ago, Paella used to be made from the week’s leftovers.

I discovered paella a few years ago while covering a re-enactment of Cabrillo’s landing in what is now San Diego. Balboa Park’s House of Spain had prepared a huge pan full of paella. I tried some and was hooked. Now, at Balboa Park’s annual “December Nights” holiday celebration, I always try to visit the House of Spain’s food concession tent to watch them make paella – and now, thanks to “VIVA paella,” we no longer need to wait for special occasions to enjoy it.

After I walked around a bit and worked off some of that paella, I observed the cooking taking place at “The Pad Thai Stand.”

Chef Nat explained that pad thai is basically a pan-fried noodle with a tamarind sauce, but that the flavors vary greatly depending upon the place in Thailand where it originated.

I prefer sweet rather than spicy flavors, so the pad thai that the chef prepared for me was more sweet than spicy. It was delicious.