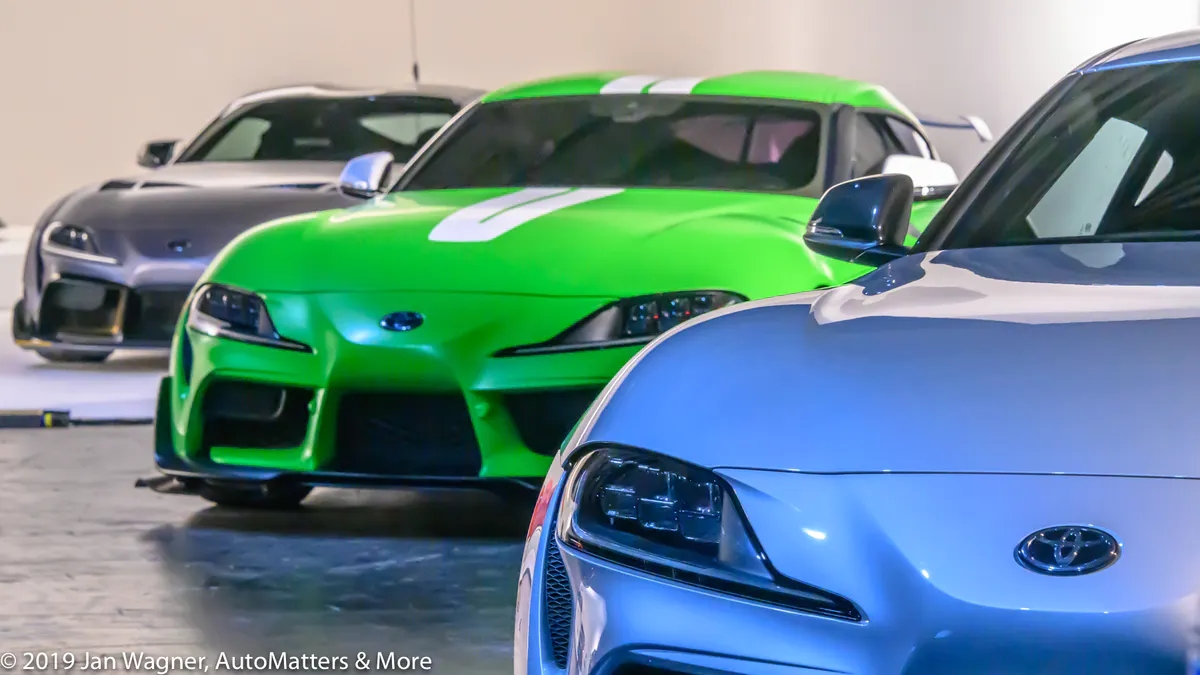 Now that the world has seen the new Toyota GR Supra, you just knew that Toyota would want to do something extra special for the SEMA Show. Add to that the fact that Toyota Racing Development (TRD) is celebrating 40 years and it should come as no surprise that there were no less than a dozen GR Supras on display at the SEMA Show, from stock to fully race prepared.

Ed Laukes, GVP, Toyota Division Marketing, squared off with NASCAR analyst and automotive TV personality Rutledge Wood to build what their special GR Supra should be.

Ed tasked Marty Schwerter to work with the Motorsports Technical Center to fabricate the GR Supra Heritage Edition – my personal favorite. Much of what makes this car special is a series of features that hearkens back to the MK IV without losing the modern lines of the new chassis.

The turbocharger is stock but has been modified for better airflow. It has a custom intake and exhaust. It is tuned to produce over 500 horsepower on a stock long block.

The headlights on the concept were built from scratch with custom buckets – a custom design reminiscent of the MK IV (the A80 chassis).

The taillights also have those little round pieces in the back. They built custom lenses to make them look like the old car. The idea was to take the best of the MK V Supra and still honor the past of what made Supra an icon. – the ultimate Fast & Furious, ultimate SEMA tuner car.

Perhaps the most complicated and interesting engineering part of the car is they went from a traditional suspension to what they call either a pushrod or a rocker arm suspension, which you find in an IndyCar or a Formula 1 car. In those race cars they try to get the suspension components out of the turbulent air, for aerodynamics. In a production car that does not really matter, because of the body. They really did not want to widen the Supra’s overall body, so to have the wheel and tire clearance they had to move the shocks and the arms out of there, so they designed this whole custom setup so that there is an arm that operates and a rod that pushes up. It activates an arm that rocks and activates the shocks. This is a really complicated, innovative type of suspension.

A Toyota press release described the inspiration and some of the features of the cars. For instance, we learned that Rutledge Wood’s dream build was the GR Supra Ego Boost Edition. His builder was Rick Leos of Lucky Leos 17 Motorsports. They transformed his concept into reality as his aptly named project features wider, more aggressive body lines and 750-plus horsepower.

Back in 2018 the GR Supra Racing Concept hinted at what the new Supra would look like, and how a competition model might appear.

The Supra built for the NASCAR Xfinity Series has enjoyed great success in its first year. Toyota development driver Christopher Bell drove the No. 20 Supra for Joe Gibbs Racing.