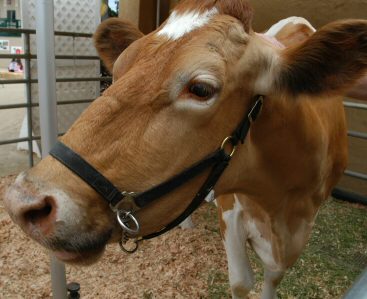 My report begins with an escorted parade from a nearby shopping center to the fairgrounds. The occasion was one of several days of car shows at the Fair. This day the show would include Chevrolet Corvettes and Mazda Miatas.

We began by meeting by the McDonald’s in the Albertsons parking lot just off of Via de la Valle, on the other side of the freeway from the Del Mar Fairgrounds. Quite a few of us gathered. Some of us used the opportunity to do some last-minute touch-ups on our cars for the show. You can always recognize my red Miata. It is the only one with the padded rollbar AND the red & white Hawaiian print seat covers. Those seat covers protect my black cloth seats from bird droppings (good luck seeing bird droppings in THAT pattern).

This year the theme of the Fair was the “Seussentennial Celebration,” in honor of Dr. Seuss. So, shortly before it was time to leave, someone dressed as the ‘Cat in the Hat’ briefed us on the short parade in which we were about to participate. Then we were ready to go.

The police escorted us from the shopping center to where we were going to show our cars. What was perhaps even neater than the police escort was the fact that traffic was stopped for us along the mini-parade route so that we would all, hopefully, stay together. To get to the other side of buildings, we drove through a tunnel similar to a European carriage entrance. Then, with the ‘Cat in the Hat’ directing traffic, we arrived at where we would display our cars for the show.

I typically spend most of my time with my cars driving them, and only clean them when they really need it, so it is a good thing that once in a while I enter my Miata in car shows. That motivates me to clean it especially well, to avoid being embarrassed. Such was the case for this car show. As a result, my car was quite clean. I even attached the cover over where the convertible top was folded down. All in all, it looked pretty good. Since there was going to be judging, I had made up some little placards describing the special features of my car (it is a very limited edition 2003 Miata ‘Club Sport’ model). My car is used for autocrossing so I also put on my magnetic car numbers.

After our cars were put on display, we left for a few hours to see more of the Fair. I even came back other days to see more. One of the days that I went, Chevrolet had a mini ‘Ride & Drive’ where we could actually test drive some vehicles and get a $25 gas card. Thank you!

One lucky lady won a $100,000 Fantasy Garage overflowing with stuff. Anyway, I’ll let my pictures speak for themselves, featuring sorta-kinda automotive or at least transportation-related subjects (yeh, right). I hope that you enjoy them.

As you can see, membership in a car club can really add to the total experience of car ownership. Perhaps even more than that, it can also contribute to one’s social life – especially if you’re single, like I am. I look forward to sharing with you the next annual AutoMatters & More installment of ‘Cars at the San Diego County Fair.’ That’s only a year away.