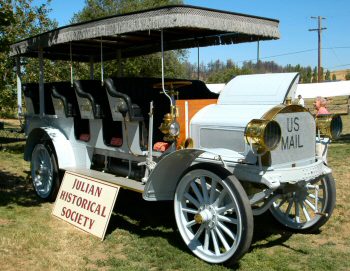 Car clubs are volunteer organizations. Nevertheless, events require plenty of organization and workers. Since I have been a member of the San Diego Miata Club (SDMC) for over a year, I decided it was high time for me to organize an event. Simply writing newspaper columns about our events was no longer enough.

Our membership enjoys drives in the country (which we call runs) so I decided to organize one. I’d heard that the first annual Julian Classic Motoring Show was coming up in about a month, to coincide with the Fourth of July weekend. Proceeds from the show were earmarked for the Julian Firefighters Fund. I thought that driving there would make a fun run and it would benefit a worthy cause, too. The club agreed that it was a good idea so that became our destination.

For a run to be successful, I soon learned from other club members that it needs to have more than just a destination and a route from the Internet. It needs to be carefully planned. The route should have stops along the way, determined in advance. Mileages for each stop and turn need to be written down on instructions – a copy of which should be given out to everyone at the start of the run. Think of it as a really easy rally with no tricks. The idea is not to stump people. The instructions should ensure that no one will get lost. The instructions are especially important because if lots of cars participate in the run, the likelihood is high that some cars will miss a green light or someone will pull in front of them, separating them from the group. Everyone needs to know precisely where to go along the route, not just the final destination.

For me that meant running the route twice – once in advance by myself, to plan out the stops along the way, and once with the group. I soon learned another reason why doing a pre-run is a really good idea.

Our route would begin from the Costco/Lowe’s/Ikea parking lot just west of Qualcomm Stadium in San Diego. That would allow people to gas up at Costco, eat breakfast at McDonalds and hit the restrooms. For the start of the pre-run I zeroed the odometer, headed out of the lot – and almost immediately made a wrong turn. To get to I-8 east towards Julian I thought the way to go was to take I-15 south and then get on I-8 east. WRONG, that doesn’t work. Oh, I headed south on I-15 all right. The problem is, as I soon learned, you can’t get to I-8 East from I-15 South if you get on I-15 at Friars Road. I ended up having to turn around well south of I-8, drive several miles back to Costco, and try again.

I won’t bore you with the rest of the pre-run details. It will suffice to tell you that I worked out most of the bugs in advance of leading the group. I planned for plenty of stops and side-trips along the way, to let my fellow club members enjoy sights that were off of the beaten path. I even found some neat stuff beyond the car show’s location, for the drive home. All that remained was for me to enter my route notes in my computer and print out enough copies for everyone. I was all set – or so I thought.

At 5 PM the day before the run I received a phone call at home. One of our club members had just heard on the news that a fire was burning in the Julian area! Oh no. Nobody needed that again, especially not the residents, business people and firefighters. I immediately got on the phone and called someone involved in organizing the car show. They told me that there was just a little bit of smoke. They assured me that the show was still a go and that there was no need to cancel our club’s run. Relieved, I sent a message over the Internet to our club members, reconfirming the arrangements.

Saturday morning on the coast dawned overcast and a little damp. I looked on the bright side. If it was drizzling there should be no further fire risk. I put my 30-some-year-old Midland Citizens Band radio in my Miata, grabbed the route instructions for everyone and headed to the meeting place. I got there about half an hour before our scheduled departure and found that no one else was there. Okay, stay calm. People don’t arrive early for this stuff. I got gas and waited. Sure enough, cars started to arrive soon thereafter. By our scheduled 8 AM departure time there were ten clean Miatas, ready to go. I distributed the instructions, we determined a channel for the CB radios (including testing mine, for the first time in years) and – gulp, were ready to go, with me in the lead.

We had barely even begun when we faced our first challenge. As I was getting my bearings on the freeway, who should pull up and quickly zoom past us than a California Highway Patrol car! It was a good thing we were not speeding.

We were about to have a wonderful run in San Diego’s beautiful East County. Soon after we started heading east on I-8, passing Alpine and the Viejas casino, the sun broke through the clouds. My mileages were spot on, probably thanks to having pre-run the course in the same car – to eliminate any chance of odometer error.

When we stopped at the first point of interest, everyone made it – and that’s when I learned my first mistake. If you ever organize a run, make sure you plan for bathroom stops. My stops were not at places that had bathrooms, which was a problem for some of us. However, we all had directions so that made it much easier for those who needed to leave to know where to meet back up with the group.

Things were great from that point on. Our route took us through the tight curves of Highway 79 North, past Lake Cuyamaca towards Julian. Talk about a perfect sports car road. Unbelievably, at 9 AM on a beautiful Saturday morning of a holiday weekend there was absolutely no traffic in front of us for most of the way. It was as if we had the entire highway to ourselves.

The natural beauty of the area has really started to recover from last year’s tragic fires. New vegetation is sprouting up all over the place. There are even some kinds that I don’t recall seeing there before. Perhaps the new beginning has given other foliage a chance.

Soon we drove through Julian, once known for its discovery of gold. It was all decked out in red, white and blue for the holiday.

A few minutes later we arrived at the Menghini Winery, site of the car show. The organizers had thoughtfully set aside a parking area near the show cars for our group. We had just enough time to park and make the 10 AM start of the show. I took many photos, some of which are here for you to enjoy.

There were some incredible cars on display. I hope my pictures will give you an idea of the wonderful variety present. My favorite was probably the Amphicar – a small car from the 60s, with two propellers underneath. It was designed for amphibious pleasure use and probably got a lot of attention whenever it drove into a lake! Other vehicles included a beautiful Mercedes-Benz 300-SL “Gullwing,” a 1941 Cadillac with a massive chrome grille, motorcycles and even a vintage tour bus.

When we worked up an appetite there was a BBQ, and singers entertained us. Naturally there was also wine tasting. After all, this is a winery. Someone even showed up with a few hungry Llamas in tow!

Raffle tickets and commemorative items were on sale to benefit the firefighters. A great time was had by all. We may just do this run every year.

After the car show ended, a couple of us continued on the rest of my route. We stopped at the “King Leo Candy Factory” on Julian Road. Inside they were giving away delicious samples. That was clever of them. It worked. We all ended up buying something sweet to eat.

Our last stop of the trip was a little bit further along highway 78 West towards Ramona. We turned in and drove along what soon became a very narrow, windy road to the lake at Sutherland Dam. There were pretty steep drop-offs and we encountered some oncoming traffic. I don’t think I’d want to drive that road in the dark.

Surprisingly, hardly anyone was at the lake. We stopped to watch some kids fish. They told us that the fishing there is pretty good, despite the fact that the water level is really low (7% of capacity, according to the kids). There were boats for rent, although the kids were doing just fine fishing off of the dock. There was even a little store. I made a mental note to return someday with my kids, rent a boat and go fishing.

We headed back onto 78 West and drove home our separate ways. What a great day. I hope you enjoyed it, too.

Now here’s a note on an upcoming car show in San Diego County. Perhaps you would like to lead your own fun run to it. On Sunday, Sept. 19, between 1 and 5 PM, plan to take in the free “Vehicles of Character” car show at the Del Mar City Hall parking lot. The event organizers plan to gather a collection of somewhat out-of-the-ordinary cars, trucks and motorcycles for the display. Owners who live or work in the 92014 zip code and wish to display their interesting vehicles should contact either John Kerridge ((858) 755-7821 or jkerridg@ucsd.edu) or Rod Franklin ((858) 793-7704 or Rod.Franklin@kuehne-nagel.com). By the way, John displayed a car in the Julian show. I love it when we support each other. He restored the car himself and races it.