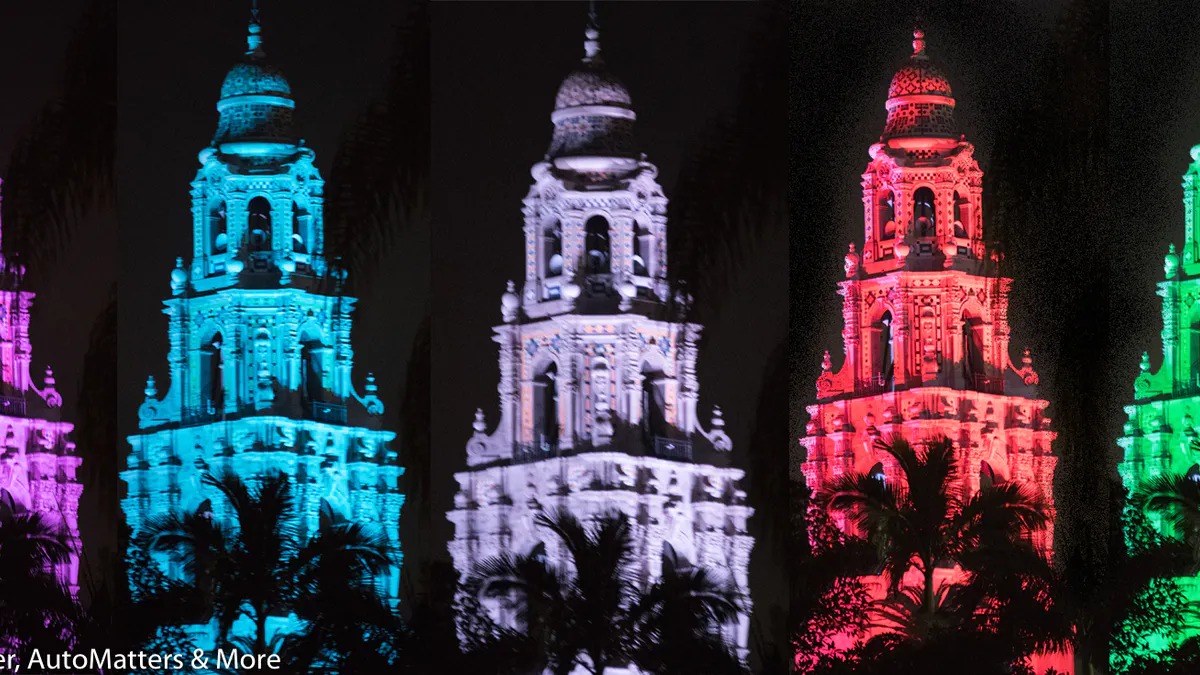 The iconic California Tower, constructed for the 1915 Panama-California Exposition and lit up for the holiday season.

Yet another great reason to visit Southern California and San Diego!

Over the 40 years since its inception, “December Nights” in Balboa Park has become a hugely popular, cherished, must-experience San Diego tradition. 3,000 visitors enjoyed it the first year. Since then attendance has swelled to over 350,000! While the park is certainly filled with people, there is so much to see and do that lines are not long.

Cultures from around the world were represented by the park’s various international houses.

There were food trucks and food concessions, in addition to ethnic foods prepared by the park’s international houses. My favorite was the paella, carefully prepared under the direct supervision of Jesús Benayas, President of the House of Spain (houseofspainsd.com). It is slowly cooked with care in huge pans, combining chicken, shrimp, calamari, clams, bell peppers, peas, tomatoes, onions, rice and garlic, and cooked in olive oil. The result is a taste that is out of this world, and better than you’re likely to find in any restaurant.

The Del Cerro Baptist Church presented the story of Christmas on the open-air Spreckels Organ Pavilion Stage. A choir flanked both sides of the towering “Living Christmas Tree,” which opened from time to time to reveal live scenes from the Christmas story.

There was plenty to keep the kids entertained and happy. On the family-owned and operated, San Diego County-based Christiansen Amusements midway was a giant carousel, many other rides, cotton candy, funnel cakes and carnival games of chance.

Music included choirs caroling and bands. Over at the San Diego Automotive Museum there was bell ringing by the San Diego Harmony Ringers.

The Panama 66 Patio in the Plaza de Panama was the place to be for the jazz and brass sound stylings of Gilbert Castellanos.

The Civic Dance Arts Company performed Rockette style, while over at the Casa del Prado Theater, the San Diego Civic Youth Ballet performed a selection of excerpts from “The Nutcracker Suite.”

Members of the House of Sweden served food and traditional Swedish glögg (a sweet, warm and spicy wine beverage), and on Friday they presented the traditional Santa Lucia Procession. While there I could not resist buying a whimsical Santa Claus figurine – designed by artist and illustrator Rolf Lidberg, Sweden’s foremost troll and Santa Claus illustrator.

Towards the end of the evening, as people were starting to leave, a chorus of Santa’s elves entertained onlookers with Christmas carols. The archway of a museum’s entrance beautifully amplified their melodic sounds.