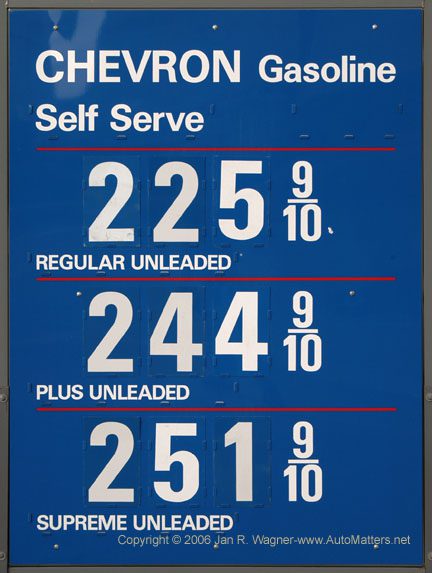 Crisis at the Gas Pumps

The price of gasoline is a hot topic of discussion this week. Citing the Lundberg Survey (Lundberg Survey, Inc., “an independent market research company specialized in the U.S. petroleum marketing and related industries” – www.lundbergsurvey.com), news outlets reported that San Diego County has the dubious distinction of having the highest average price for gasoline in the nation.

While I usually do not participate in ‘pass it along to your friends and associates’ email, I did this past week. The subject of that email (which was sent to me by a friend in Canada) was the price of gasoline and what people in Canada could do about it.

The author of that email had come up with what he or she believed to be a good, workable solution to stopping the climb in the price of gasoline. They called for a boycott on Shell and PETRO CANADA gasoline brands, with the assumption being that if enough people took part in this boycott, the targeted brands would eventually lower their prices in an effort to win back customers. They went on to speculate that a price war with the other gasoline brands would ensue, hopefully ending in a return to lower prices for everyone at the gas pumps.

All recipients of the email were asked to pass it along to at least ten other people. It was calculated that if enough people received and acted upon the initial email (which was sent to 30 people) by sending it to 10 others, and everyone who received it participated in the boycott, 300 million people could conceivably be taking part in the boycott by the sixth round of mailings (30×10=300, 300×10=3,000 and so on) in a matter of days. Wishful thinking? Probably.

I don’t know if I agree with the author’s suggestion or not and I said so in my response to the email. For one thing, a large-scale boycott could hurt the lessees and employees of Shell and PETRO CANADA stations.

It could also go the way of the grocery store strike, with the other gasoline brands supporting the targeted ones much as some grocery store chains supposedly helped others weather the strike. We all know how that protracted battle ended.

Furthermore, the supply of refined gasoline, especially with all our environmentally green California formulations, is not by any stretch of the imagination infinite. If push came to shove and we had to get gas from a boycotted brand, I suspect we would do just that and not give it a second thought.

I guess that I do not think a boycott would ultimately work. Nevertheless, we need to do something. The question is what?

This past week I paid $2.55 per gallon for Premium-grade gasoline for my Mazda Miata sportscar. As coincidence would have it, I paid this price at my neighborhood Shell gasoline station. While I knew the price of gasoline had been going up for weeks, this latest price simply shocked me. At least one other nearby gas station (also a Shell) was charging even more!

Who knows what the price of gasoline will be next week, next month or next year? As I was filling my tank, I thought about some of the things I could buy with the same amount of money that I was literally pouring into my car.

The price for a couple of gallons would have bought me my fast food lunch. A complete fill-up would have paid for a nice night on the town.

The other day I was considering taking a drive from San Diego to Anaheim to go to Disneyland. Since I have an annual pass, that day-trip used to be a no-brainer. My usual routine once there includes spending about $10 for a meal and sometimes I buy a souvenir or Disney art, too. However, with the current price of gasoline, the additional cost to get there and back would have been quite high. Pass or no pass, going to Disneyland is now an expensive proposition. Consequently I decided to stay home and watch TV instead. Disneyland lost out and so did the gasoline companies – since I didn’t use any gas at all. That is one personal example of how the gas price crisis is hurting our economy. I’m sure you can think of at least one of your own. Multiply yours and mine by hundreds of thousands of people.

Frankly I don’t know what the answer to this serious problem is but I strongly suspect the answer lies in curtailing our thirst for gasoline, not in finding more sources of the fossil fuel. Hopefully our various levels of government are working on solutions to this dilemma but for a variety of reasons (including vested interests and a general inability or unwillingness of government to do anything radical except when they are in crisis mode), they may be part of the problem.

I am also angered by the audacity shown by OPEC in their reduction of crude oil production in the face of these escalating prices. The monetary harm that they have intentionally done to us is, in my opinion, unconscionable. I doubt many of their members are losing sleep over this.

I truly feel sorry for all those people who have bought big, gas-guzzling SUVs. Keeping them fueled must be costing a small fortune. We’re in a real mess.

So what can we do as individuals? I have scaled back my driving trips. To save fuel, I have reluctantly starting short-shifting my Miata. I will probably drive somewhat more slowly and will be more conscientious about making sure my tires are properly inflated. Instead of continuing to buy high-priced gas at Shell, I will gas up more often at Costco and plan my refueling stops accordingly. Costco’s gasoline prices seem to be significantly lower. The other day premium gas was 30 cents per gallon lower at Costco than at my neighborhood Shell station.

I would use mass transportation but, to my knowledge, there are no bus stops anywhere near where I live. Come to think of it, I cannot recall seeing a public bus anywhere near here except for a couple of weeks per year at Torrey Pines High School when they are being used as shuttles to the Del Mar Fair. And yes, I take those and am thankful for their presence.

Even if there was a bus stop near here there are other problems, not the least of which is the time it would take, and the number of transfers, to make all but the shortest trips. How is a person supposed to accomplish a major grocery-shopping trip by bus? It’s enough of a pain with a car.

I will not buy another high gas consumption vehicle. Instead, I will continue to impatiently wait for more manufacturers to take the lead of Toyota and Honda, and sell economical hybrid vehicles. One problem with hybrids seems so be that, for whatever reason, the manufacturers cannot or will not produce hybrid vehicles quickly enough to meet the demand for them. While I can and do get any number of gas guzzling vehicles to review, I am frustrated that I still cannot get the use of a new hybrid Toyota Prius for evaluation in my automotive column, and also by the fact that Ford has repeatedly pushed back the introduction of their hybrid Escape SUV.

Furthermore, with the exception of the new Toyota Prius, the only hybrid vehicles in production are very small in size and carrying capacity. They do not meet the needs of a large cross section of our population. Fortunately that situation should change in the very near future.

Another possible solution is the reintroduction of diesel-engined vehicles into our marketplace. Before you groan, let me tell you that the diesels they have in Europe make our old diesels that belched black smoke look like antiques. New technology diesels are economical and have great performance. I know. I’ve experienced them. Supposedly the only thing that is stopping us from getting them is the unacceptably high sulfur content of our diesel fuel.

These are only interim steps. Sooner rather than later we need to shed our dependence on gasoline as the fuel for our transportation needs.

I sent out an early draft of this column, in the form of an email, to some of my car club buddies and their responses came quickly. While I cannot and will not speak to the accuracy of these responses, they certainly do provide food for thought.

One person told me the number of gasoline distributors in California has dropped dramatically in the last dozen years or so. Now, thanks to sharply reduced competition, the downward pressure on prices has been significantly reduced.

Another all but applauded the right of the oil companies in our market-driven economy to charge every penny that they could legally get from us. Someone else suggested renewing our efforts to urge Congress to allow drilling for oil in Alaska.

There was much discussion about the different formulations of gasoline across the country, and how we in California have our own, especially green formulations. Relatively few refineries produce this, which results in marginal supplies of refined fuel and drives prices up.

Of course, conspiracy theories were floated – especially one about how the mandated use of ethanol as an ingredient of refined fuel is required mainly to prop up corn prices for the rural constituents of states that – you guessed it, grow plenty of corn. Apparently in California we do not.

Discussions of taxes on gasoline were non-conclusive. Some said that unlike in Europe, taxes on gasoline here are relatively low. Others said that by the time all levels of government are through taking their fair shares, the total in taxes paid is actually pretty high. Perhaps the truth is somewhere in the middle.

Some went so far as to deny the notion that the current price of gasoline really bothers the majority of people very much. By way of proof they pointed to the continuing sales of big SUVs. They suggested that until gasoline prices get prohibitively high people will maintain their current levels of gasoline use and steer away from alternatives like hybrids.

Well, how about those opinions from some of our fellow Californians? They made my head spin. Perhaps we should all just go back to using horses, buggies and chuckwagons. Nah. What do you think?