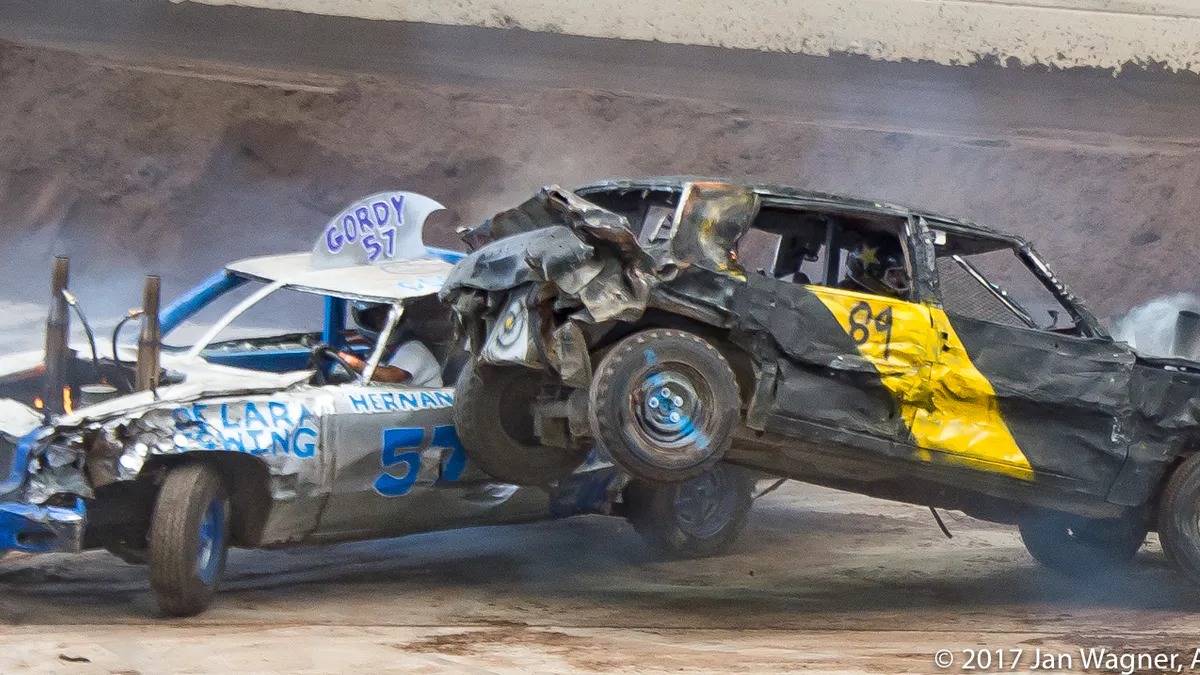 DEMOLITION DERBY – “IT’S TEN TIMES BETTER THAN JUMPING OUT OF AN AIRPLANE!”

Mayhem on wheels at the San Diego County Fair

Thrilling, action-packed motorsports are an annual tradition at the San Diego County Fair.

In demolition derby a group of loud, flame-belching, beat-up junker cars entertain cheering fans by crashing into each other, over and over again.

The goal of each driver is to win by disabling the other cars without rendering their own car immobile, and therefore be driving the last car still moving.

The competitors are not in this to make money. Even winning an event does not cover the required expenses, much less justify the risk to life and limb, so why do they spend their time and money to buy, equip and then smash up cars?

Mauricio De Kara of De Lara Towing explained it this way: “It’s only $1,500 if you win first place. It’s not the money that we go for, it’s really for fun and bragging rights – the one who hits harder, who rolls the car or anything like that. We’ve been around for a long time, and we like to go and give a show. My uncles and my brothers have been doing this since the early 60s – a family tradition in Indio, California. In Coachella, Riverside County – we always used to go to Indio Fairgrounds. WGAS had a show over there. We follow them wherever they go do shows anywhere else. We go to San Diego, we go to Blythe, Perris, Imperial and Utah sometimes. At local shows we sponsor up to seven or eight cars. Robert Hernandez is my nephew.”

In Del Mar, Robert drove a 1972 Chevy Impala. He built it over five months, spending a considerable amount of money and many hours away from family and friends, in anticipation of competing in the fair’s demolition derby.

“It is the most exhilarating sport I’ve ever done. The rush is insane. It’s ten times better than jumping out of an airplane.”

“First you focus on safety. I built a roll cage and focused on the steering. I make the car really strong, welding whatever I need to as far as plates around the car. Then I focus on the drivetrain and moving the car.”

Assuming all the labor is free, how much in parts and materials are we looking at to prepare one of these cars to the rules? “You’ve got $2,000 in metal just to make it safe and strong. Then you have another $2000 for tires and rims. You’ve got transmission coolers, the shifter and a safer steering column so it can collapse in case the front end goes up. The driveshaft is another $600. The fuel cell has to be five to six gallons, and cannot be composed of any plastics whatsoever – so you’ve got stainless steel back there. The radiator is another $200 – $100 maybe. The newer motor you get that’s rebuilt, you’re probably looking at about four grand, five grand maybe. It’s not a requirement to have a fire suit or a fire extinguisher, but I do have a fire extinguisher just in case something goes south, you know.”

How much of this can be transferred to another car, when this one is smashed beyond recognition? “It depends on how bad it is smashed inside. It’s going to take just as many hours removing the metal that it took to put the metal in – another solid month of hours and hours after work, no weekend funds or anything like that, and just removing all parts.”

How did he get involved? “My uncles, they’ve owned a towing company. Growing up, every year we’d go out to the fair and watch them, and every year they’d get stronger and better. As a kid, eight years old and nine years old, I remember playing in the dirt and grabbing my Hot Wheels cars and smashing them together because I thought it was cool. As soon as I could, when I turned 18, I did my first demolition derby; my second when I was 19. I stopped because I moved. This is my first year back. I’m 32.”

Robert is looking forward to many more years of demolition derby. So are we.