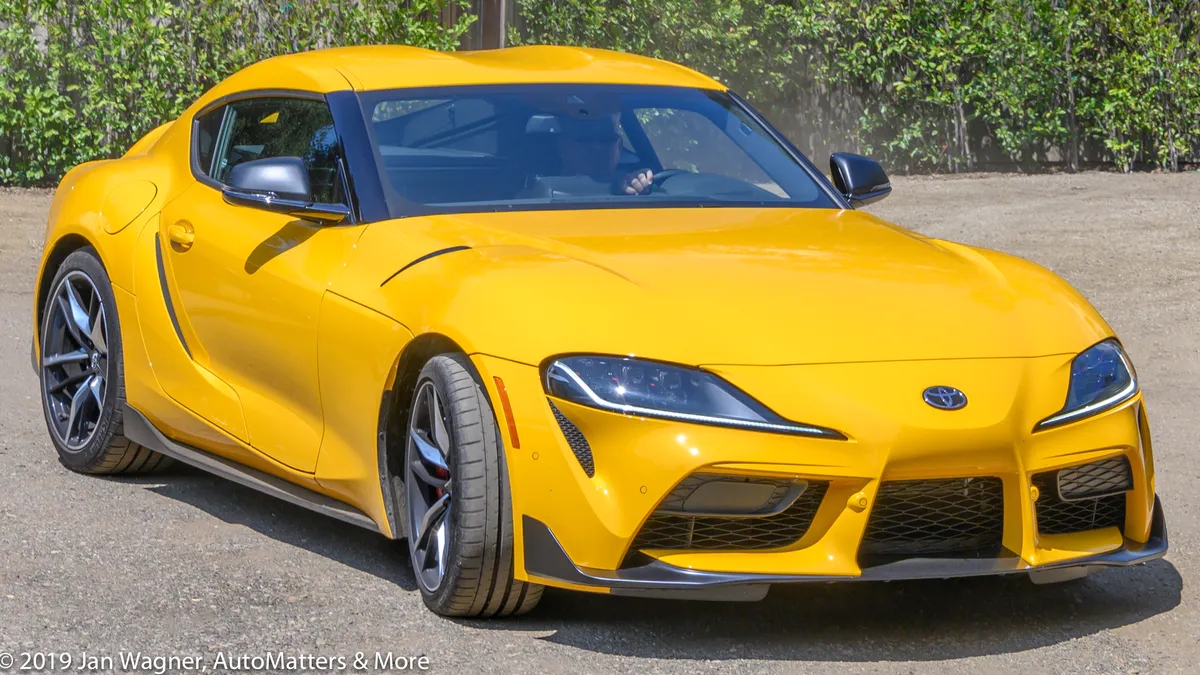 A​ driver’s car on a driver’s road: Mulholland Highway in the Santa Monica Mountains of Southern California

Toyota has not yet put a new Supra in their U.S. Press Fleet, so the opportunity to drive one in very light traffic on the spectacularly challenging, legendary, tight and winding turns and short straights of the Mulholland Highway – in the western Santa Monica Mountains, near Malibu, California and Los Angeles – was truly a treat.

The new 2020 Toyota GR Supra is cat-like in its responses to driver inputs. Its “Lightning Yellow” color especially suits this sports car, evoking images of an athletic lion – the King of Beasts – aggressively hunting down its prey in the wilds.

I will report on my initial impressions here, but to get a solid appreciation for this car, you should also check out these two websites:

First go to toyotagazooracing.com/gr/supra/. As they say, this website will give you a “FULL THROTTLE IMPRESSION” of this car, as well as provide specs for three Japanese models of the new Supra.

We learn that Toyota unveiled the GR Supra at the Detroit Auto Show on January 14, 2019. It is the first global model in the GR sports car series developed by Toyota GAZOO Racing. “Since first competing in the 24 hours of Nürburgring endurance race in 2007, Toyota GAZOO Racing has developed its cars and people through motorsports activities with the goal of “making ever-better cars.” The team has applied all of the knowledge and expertise it has amassed so far to create the GR Supra, a car designed to set drivers’ hearts racing” – and it does (more on that in a moment). This is a very different car from its BMW Z4 convertible cousin.

Then go to www.toyota.com. Under the drop-down menu “Select Vehicle,” click on “All-New 2020 GR Supra. For our American readers, that will describe the U.S.-spec model.

The U.S.-spec model that I drove was a 3.0 Premium. Its powerful 3.0L Turbo, inline 6-cylinder, DOHC, 24-Valve engine provides 335 horsepower and 365-lb-ft of torque, but it feels like much more than that.

That power is transferred to the rear wheels via a state-of-the-art, 8-speed automatic transmission with paddle shifters, launch control, active rear sport differential and active exhaust. The adaptive variable sport suspension features double joint type McPherson struts up front, multi-link in the rear. The electric power steering is sport-calibrated. Wheels are 19-inch, forged aluminum twin 5-spoke, with Michelin Pilot Super Sport tires (255/35 ZR 19 in the front, 275/35 ZR 19 in the rear). The front brakes are 4-piston Brembos. The price for all this wonderfulness is a very reasonable $53,990, with the non-Premium model starting at $49,990.

Now for my first impressions of the Supra. Depending upon the position of the “Sport” button on the center console, this car offers Jekyll and Hyde, good versus evil personalities (referring to the classic 1886 story by Robert Louis Stevenson), providing the best of two very different driving experiences.

Without Sport mode engaged, it offers a pleasant, effortless driving experience. You could comfortably cruise in it for endless hours. Thankfully, for when you might need to load large or oddly shaped cargo, the hatchback provides much easier access to the trunk than would a conventional trunk lid. You can drive, converse with your passenger and relax.

This Dr. Jekyll side of the Supra will be welcome news to drivers who fondly remember the very first Toyota Supra, then named the Toyota Celica Supra. It was a grand tourer – a more luxurious, more powerful (six-cylinder as opposed to four) version of Toyota’s popular Celica.

Switching to Sport mode releases the Hyde-like beast side of the GR Supra – ready, willing and able to leap like a lion — roar and all — from a standing start, and it upshifts at a higher RPM. It will now respond to your driving commands hard, and without hesitation.

The suspension is firm, but not harsh – perfect for carving the tight turns in the canyons above Malibu or taking to the track.

The exhaust note is loud and visceral, emphasized as we drove through tunnels on the Mulholland Highway. Lifting off of the pedal produces a sharp, pleasing crackle.

Toyota — what do you say? My helmet is ready to go!