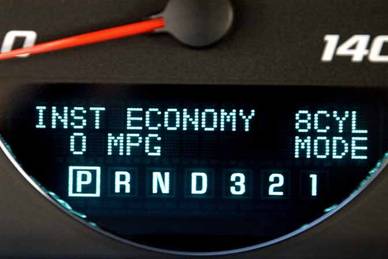 In past columns I have addressed the subject of technology-driven efforts to significantly improve fuel economy. You may recall reading my two-part report (in AutoMatters 130 and 131) on the presentation by Dave Hermance of Toyota about what Toyota has been working on. Ford, with their Escape hybrid, was the first of the major automobile manufacturers to bring a full hybrid SUV to our market.

General Motors has also been working diligently in this area. This past week I attended what they called the “Impala Fuel Economy Media Tour” in downtown San Diego – their first of several such presentations throughout California.

This was about technology and driving techniques that can improve fuel economy today. GM says it is committed to saving drivers of its vehicles money at the gas pump, and has been making great strides in this area. Their goal is “to offer its customers more vehicles that achieve 30 miles-per-gallon … than any other manufacturer for 2006.”

Did you know that – at least as far as the latest GM pickups are concerned, you will get better fuel economy if you drive with the tailgate up, rather than down (with or without a cargo net to keep stuff in)? GM spends a great deal of time and effort designing their vehicles to get their best aerodynamic numbers – and thus fuel economy, the way that they are actually driven. As I understood the explanation, GM pickup trucks are designed to provide for the smoothest airflow up and over, from front to back, with the tailgate up. Lowering the tailgate disrupts this designed-in airflow pattern, creating destabilizing resistance that wastes fuel. Think of how racecars have a spoiler at the back, and how that device can help to securely plant the car’s rear end on the track. If not designed properly, the spoiler could actually reduce downforce and cause dangerous handling.

“Aerodynamics is the second largest contributor to truck and sport utility vehicle fuel efficiency.” So, what is the largest contributor, according to GM? The answer to that question is derived from the powertrain. “There are several key powertrain technologies that GM is implementing including Active Fuel Management engine cylinder deactivation, engine variable valve timing and six-speed transmissions.”

To demonstrate Active Fuel Management engine cylinder deactivation, they brought along several Chevrolet Impala SS cars, each featuring their “all-new 5.3L small-block V-8 with Displacement on Demand (DOD) technology.” We got to drive these around downtown San Diego and on freeways. Power was impressive, as I would expect a V-8 to be. However, what makes this engine really shine is the fact that it seamlessly changes from running on eight cylinders to six to four, as needed. Some of you may remember the problem-plagued Cadillac that offered a similar feature many years ago. Forget that car. The new Impala works very, very well.

I couldn’t tell how many cylinders were in use, or when, except by looking at the display on the dash. Another display constantly updates fuel economy. This is important information, because by observing this data you can learn how to drive to achieve better fuel efficiency – something that I’ve learned driving my 2005 Toyota Prius hybrid.

That brings us to another area that was addressed: fuel efficient driving techniques that you can use to save fuel (and money) when driving any vehicle. Here are four recommendations from GM:

1. Drive the speed limit. Each five mph you drive over 60 mph is like paying an additional 15 cents per gallon for gas.

2. Using cruise control on the highway helps you maintain a constant speed and should help save up to 10 percent.

3. Avoid keeping unnecessary items in your vehicle – an extra 100 pounds in a vehicle could reduce fuel economy by up to two percent.

4. Keep vehicles properly maintained. Replacing a dirty air filter can improve a car’s gas mileage by as much as 10 percent. Regularly check tire pressure, following the recommended inflation. Gas mileage can be improved by three percent by keeping tires inflated to the proper pressure.

I’ll end with this. Dave Stall, one of the other local journalists in attendance, described for us an experiment that he performed recently. He loaded up a van, strapped a big box to the roof and, to quote Dave, drove the van like he stole it (in other words, very aggressively). Then he removed the box (which had caused fuel-wasting, aerodynamic drag) from the roof, unloaded the heavy cargo from inside and drove with a light foot on the accelerator, using fuel saving techniques. The result was not at all surprising. As I recall he said that he experienced a six miles per gallon improvement in fuel economy.