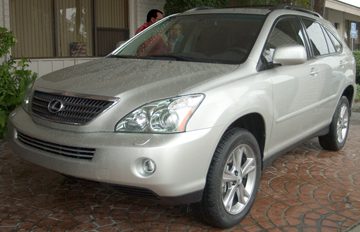 Part of a Presentation by Toyota’s Dave Hermance

Regular readers of AutoMatters & More might know that I own a 2005 Toyota Prius. I also have a turbocharged Mazda Miata. This may seem like an odd combination of personal transportation choices but there is a logical explanation. You see the Prius is my everyday car, whereas I save the Miata mostly for fun, recreational drives. For proof of this one need only look at the accumulated mileage on the two vehicles. The Prius (which, by the way, is newer than the Miata), has about 4,000 miles on it already. My Miata barely has 800.

A little while ago I received an email telling me about an upcoming meeting of the Prius Club of San Diego. In the past I have only joined car clubs that include a motorsports component (specifically autocrossing), but the announcement for the Prius club’s meeting caught my attention for an entirely different reason. It stated that “Dave Hermance, Chief Engineer for Environmental Issues for Toyota will be addressing the 5th meeting of the Prius Club of San Diego.” That attracted the automotive columnist side of me.

It was pouring rain so traffic was a mess. I barely got to the meeting on time. I wondered how many people would bother showing up on such a miserable day. I need not have worried because when I arrived, the hotel’s parking lots were full of Toyota Priuses, just like mine.

Outside the hotel entrance a group of people were milling around a Lexus RX 400h. The “h” is for hybrid, and this vehicle is not yet on the market. Dave Hermance was there, busily trying to answer everyone’s questions.

I picked up enough of the conversations to learn that this pre-production vehicle represented something very special. This was no underpowered economy SUV. Between the powerful gasoline engine and the upgrades beyond the Prius on the electrical side, this vehicle is quick. It will be good for the environment and have a spectacular level of performance – all while saving fuel compared to vehicles of similar and perhaps even lesser performance.

After taking care of routine club business and addressing some minor and not-so-minor problems that owners were having with their Priuses, we moved on to the highlight of the meeting – a presentation by Dave Hermance of Toyota. It was refreshing to hear an auto company representative engaged in a frank, open discussion of his company’s products. He didn’t try to make empty, PR-speak excuses for perceived shortcomings of the Prius that were raised by a few members of the audience. Instead, Dave listened to all of their comments and addressed them. He also discussed the competition, objectively pointing out both negatives and positives. It is probably not a coincidence that Dave is not on the sales side of Toyota.

As you will now see for yourself, Dave is an entertaining speaker and seems to be very knowledgeable on the subjects of ecologically correct vehicles and hybrid technology, yet you do not need to be an engineer to understand him. He began by telling us that “every manufacturer in the world has this ultimate vision of trying to get to a point where the automobile has a smaller footprint on the environment so that we can be sustainable. Right now the automobile is contributing to a deterioration of the environment.” “The automobile, therefore, is a mixed blessing.” “It’s offered this tremendous personal mobility but until we can improve the automobile to improve its footprint on the environment it’s not a sustainable proposition.” “Toyota, like other automobile manufacturers, would like to stay in the auto business for a long time. The only way we can do that is to have sustainable product and that’s why we’ve got this ultimate vision of either an ecologically correct vehicle or a sustainable vehicle, or some kind of a lofty goal that we’re working toward.” “There are a number of paths by which we might get to that lofty goal.”

“Now that’s a little different than some of my competitors. Some of my competitors are convinced that hybrid is a flash in the pan, that at best it is a transition technology and at worst a waste of money, so some of them are not convinced yet. I think over time as we go forward and as we have folks like you who make our products successful, they will ultimately change their mind but that’s their business position, and not mine.”

“Over a period of years Toyota has (had) 16 or 17 different hybrid vehicles that we’ve either taken to production or shown as concept vehicles.” “This includes some very strange vehicles. Back in ’69 we had a concept vehicle that we showed at the Tokyo Motor Show that was a gas turbine – remember those?”

Yes Dave, I do. I remember reading about turbine cars and I saw one recently at the Petersen Automotive Museum in Los Angeles. On display was one of Chrysler’s original turbine cars, with a turbine on a stand beside the car for people to study (for more information on the Petersen, visit them on the Web at www.petersen.org.

“A gas turbine series hybrid vehicle: now that design exercise was not specifically about hybridization. It was about finding some way to get the power of a gas turbine to the drive wheels … and so hybrid in that case, the electric motor system, was principally an enabler for the gas turbine technology which never really matured – but everybody was looking at it. So the first of our hybrid concept vehicles was actually indirectly a hybrid.”

“The first of the modern-day hybrid concepts was the 1995 Prius concept vehicle.” “The ’95 Tokyo Motor Show was principally about technology – environmental technology, and that’s where we showed Prius for the first time. That concept vehicle called Prius had very little in common with the production vehicle that went to market in late ’97 but it was the first time that we showed anything in the way of a production-capable concept of hybrid technology.”

“We followed that up with a production vehicle in December of 1997, in the Japan market only originally, and that vehicle was Prius. That’s the same body style that we brought to the U.S. in the summer of 2000, and ultimately redesigned in 2003 as a 2004 model.”

“Hybrids did go back to the turn of the previous century where there were some early vehicles in the early 1900’s called hybrid vehicles, but that was trying to cover up the huge inefficiencies of the gasoline engines of the day, and then what happened is that they became overtaken by events where gasoline engines matured to the point that they offered better power and better flexibility than the electrics of the day, and the hybrids just kind of got set up on the shelf at that point in time.”

“The diesel-electric submarines … were series hybrid vehicles. A diesel engine ran a generator that charged a battery pack. The battery pack helped move. You could (run) off of pure battery when you were under water. That was the biggest application of hybrid technology in the middle 1900’s.”

“We built some parallel hybrids as a design exercise but most of what Toyota has (brought) to market is what is referred to as parallel series or power split hybrid system, which is what is in the Prius.”

“We also have a hybrid fuel cell vehicle. A few of them, I think, live in U.C. Irvine. A few of them live upstate in U.C. Davis.” “We have a fuel cell vehicle that has a Prius battery pack in it and has a drive motor that is smaller than the one in RX 400h – bigger than the one in Prius, and has power electronics in the same vein … as we have in both of our hybrid gasoline vehicles.”

In the next AutoMatters & More, Dave will discuss benefits of hybridization, and explain California’s alphabet soup that is used to classify vehicle emissions.