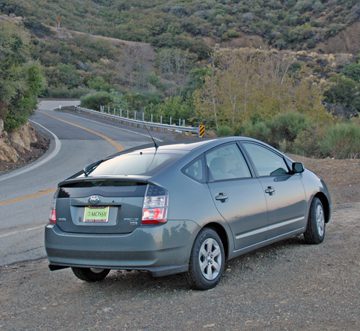 Part of a Presentation by Toyota’s Dave Hermance

What does he see as the benefits of hybridization? “Certainly the first benefit … (that) perhaps brought you to this technology or was certainly the primary attribute of the first generation of this technology, was improved fuel economy.” “Fuel in Japan is $4.00 a gallon.” “Hybrid vehicles or … vehicles with a fuel economy focus work better in a market that has high fuel prices, where the market demands fuel efficiency.” … “Even at $2.00 a gallon … that fuel price is still not enough yet to change the mainstream buyer attitude in the U.S.. So the U.S. still doesn’t have fuel economy as a high a priority on new car purchase agreements as some of us might think would be appropriate.”

“Another thing you can get from hybridization is reduced exhaust emissions. If you have a secondary power system in the vehicle, you don’t have to work the internal combustion engine as hard, and therefore you can get better emissions performance out of the system by having this electrical system to cover up some of the flaws of the gasoline system.” “In fact, the first car that Toyota brought to market – the 2001 model year Prius, was an SULEV. It’s a Super Ultra Low Emission Vehicle. Any idea why it’s called that? A little bit of a history lesson…”

Dave told us much more in his formal presentation but I was particularly interested in what was covered in the pre- and post-presentation question-and-answer sessions, particularly as it pertained to the Prius.

Some owners’ said their Priuses have an extreme sensitivity to very slight steering inputs or irregularities in road surfaces. They described this as a ‘wandering’ problem, and clearly some owners were quite concerned. I know that my 2005 Prius demands more constant attention to the steering than other cars that I’ve owned and driven. However, I have found this to be a characteristic that I can easily live with. I just need to be especially attentive behind the wheel.

According to Dave, “Prius was designed as a technology demonstration vehicle, so it has a bunch of stuff beyond hybrid on the vehicle.” That prompted me to ask him this question about the Prius’ video game joystick-like gearshift lever: “In Ford’s Escape hybrid they’ve got a conventional – at least more conventional, shift lever. Is there a reason why the Prius has what for me is a difficult shift lever?”

His answer was that this shift lever is: “… a technology stretch. They wanted to play with that. You know that is why it’s got ‘push to start’ and that’s not a hybrid feature… There are a number of features on Prius that are not demanded by hybridization.”

In my opinion it is a shame they included that shift lever because, by so doing, Toyota seems to have introduced a potentially dangerous and absolutely unnecessary problem. Allow me to explain.

On the very first day that I drove my Prius, I had parked in a diagonal parking space on a busy street. After conducting my business I started backing out. My view of oncoming traffic was blocked so I proceeded very slowly and carefully. When I got far enough back to see, I realized that there were cars coming. I quickly stopped, hastily moved the shift lever all the way into the “D” gate, let it go (to spring back to its ‘home’ position) and pressed the accelerator pedal. To my shock, the car lurched backwards.

I figured I had somehow mis-shifted, and very quickly but carefully re-shifted. The same thing happened again. Luckily, the drivers of the oncoming cars must have seen my car backing towards them because they safely maneuvered around me. No longer in panic mode, the third time I shifted slowly and deliberately and my car went into “D.” In subsequent tests I’ve determined that if the car is in Reverse and I shift the ‘joystick’ fully but too quickly to “D,” it will, indeed, ignore the shift – over and over again.

For there to be a delay between shifting the lever and having a resultant change of gears is one thing, but to not change at all is unacceptable. Based on my real-world experience and near accident, I think that is a safety issue. The fact that Toyota has installed a conventional shift lever in their new RX 400h hybrid and a very distracting beeper inside the Prius that sounds loudly whenever it is in reverse suggests that Toyota realized too late that this was not one of their better ideas. Is it a safety issue? I think so.

That said, on balance I still like Toyota’s hybrid Prius. It is a comfortable, five-passenger vehicle with, thanks to its liftback styling, the ability to carry a decent amount of stuff. It achieves great fuel economy (I consistently get in the vicinity of 45 mpg with normal driving) and produces very low emissions. It seems to get its best fuel economy when stuck in really bad, slow-moving traffic. That helps take the edge off of the traffic aggravation factor. Buyers have responded well to the Prius. The last I heard there is a one-year waiting list for one – and they do not seem to be discounted at all. I address its shortcomings by paying careful attention to steering it, and moving its gearshift lever slowly and deliberately.