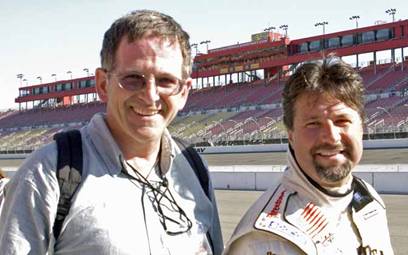 The differences between IRL cars, Champ Cars and even Formula 1 cars may seem subtle to the casual observer. What clearly stands out is that they are all fast, loud, open-wheeled race cars.

I once had the good fortune to drive a less powerful open-wheeled race car. It was a Formula Ford and I was a student at the Bob Bondurant School of High Performance Driving, in Chandler, Arizona. Even though that experience was over ten years ago, I still remember it clearly. What a blast, zooming around a race track just inches from the ground. The handling seemed incredible, much like that of my old, tail happy 1978 Porsche 911 SC. Its direction was easily controllable by the gas pedal – too much throttle and it would spin, but with just the right amount of throttle it would drift beautifully around the turns.

I must say, the Indy Racing Experience does it right. First, of course, we basically had to sign our lives away – in case of an accident. The consent forms and liability releases were several pages long, so the lawyers must have been quite happy.

That out of the way, the next step was to wait with the others while watching those who were closer to the front of the line get their own high speed thrill rides. One after the other, they got into one of the pair of cars and roared off into the distance for two glorious laps around the track. Turning fast enough to take a decent picture of a car zooming by after its warm-up lap was a real challenge.

At some point while we waited, we suited up in racing suits. There’s nothing quite like wearing the equivalent of heavily insulated one-piece pajamas while standing in the heat of the day in Fontana, California. I can only imagine what it must be like for the drivers, who have to wear those suits for hours on end. However, nothing could take away from the anticipation of the excitement that was soon to come.

Soon it was time to be fitted for a racing helmet. We were getting close.

Finally it was my turn. Somewhat nervously I approached the car and followed the directions to get seated. Accommodations were tight. Then I was belted in. The last step was to start the engine.

Now we were off, heading along pit lane and onto the track. Acceleration was very strong. The experience wasn’t quite like actually driving the car, of course, but putting your life in the hands of a race car driver on a race track is also thrilling, but in a different way.

Visibility straight ahead was non-existent – there was a seat there. The side views were fine, however. Things were whizzing by at very high speed. I had an uncomfortable sensation of nausea in the high G-force, banked turns. I can only imagine what it must be like at full racing speed, on the edge.

The car’s grip on the road seemed very secure. Never once did I fear we might lose it and hit the wall. It was fun. Dicing with other cars must be an incredible rush.

Two laps end very quickly at these speeds. I would recommend the experience to anyone. As a matter of fact, I had to do just that to a woman who was very wary of taking her turn in the car.

Later that day, there was a driver change. The driver? None other than Michael Andretti himself.

All in all, this was a wonderful experience. If it sounds like something that you’d like to try, or perhaps give to someone else as a very special gift, you can get more information on upcoming Indy Racing Experiences at other race tracks by going to www.sindenracing.com.

Oh yes, there was also an IRL race that weekend but that is another story for another time.