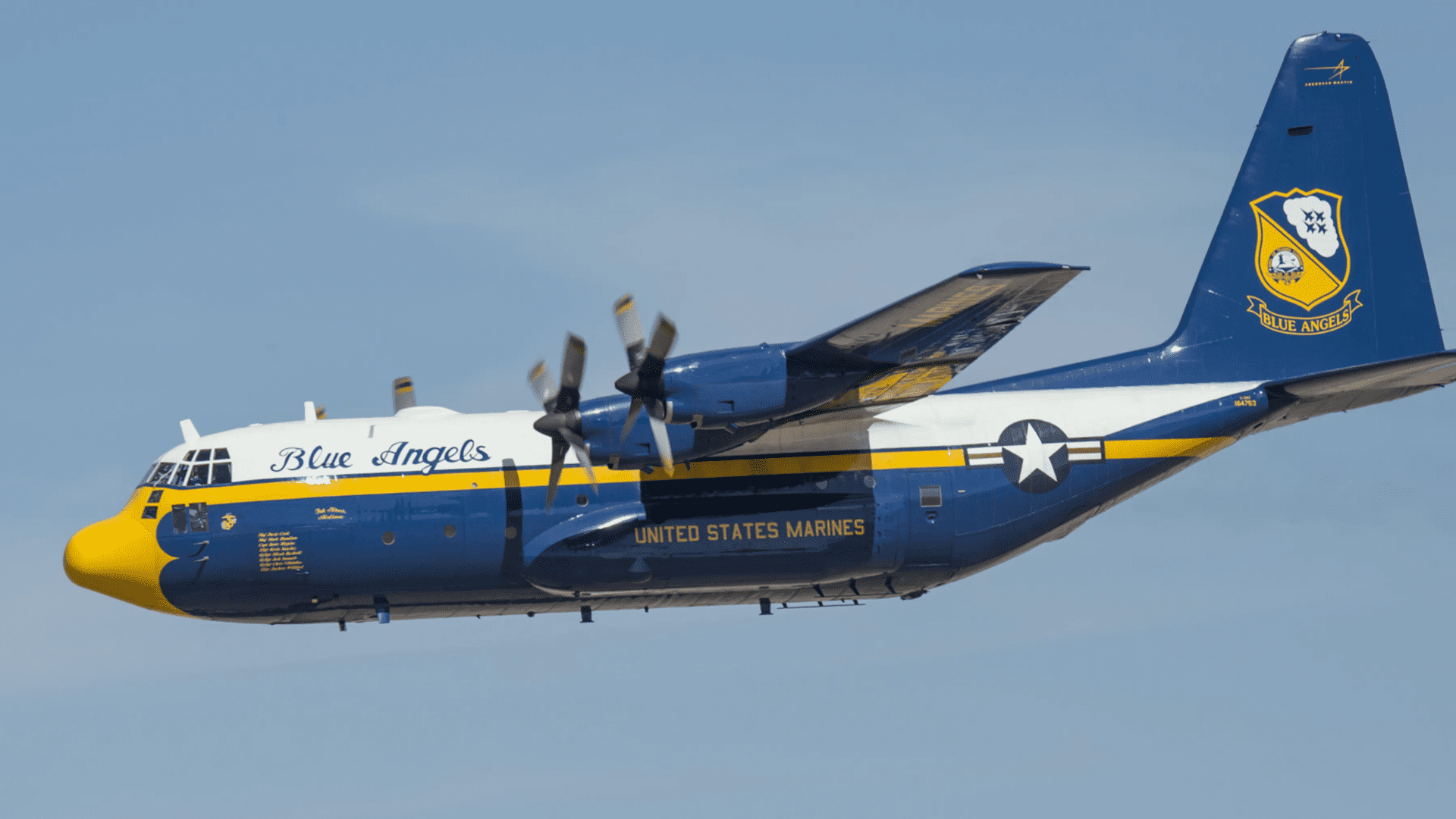 Friday, March 13, 2015 turned out to be my lucky day. Earlier I had applied for one of the coveted media spots for a ride on Fat Albert, the Blue Angels’ C-130, this day, but I’d not heard back. I assumed that meant no, so instead I went on a shoot at San Diego’s Balboa Park.

At about 9:30 a.m. my cellphone rang. It was the Public Affairs Officer from Naval Air Facility El Centro. I learned that an email snafu had prevented me from receiving my flight approval notification. He asked me if I could make it to NAF El Centro in time for the mandatory briefings?

You betcha. I arrived at the main gate of the base – the winter home of the Blue Angels – with less than a half-hour to spare.Pre-flight briefing by Capt. Katie Higgins.

I signed an air transportation agreement and listened intently to an initial briefing that included: “This is not a commercial airline. Do not wear your seatbelts loosely. They need to be tight because you’re going to go floating if you don’t. If you actually do go floating, you’re probably going to crack your head, so hopefully that’s good incentive for you guys to keep your seatbelts super-tight. That way you can enjoy the ride.”

We learned that “you guys are actually going to be part of history today. Captain Katie Higgins is going to be the first female to be performing the demo, as far as practice, and tomorrow will be her first air show.”

Then our left seat pilot, Captain Katie Higgins, introduced her crew and gave them a “quick crew brief” that included her step-by-step, turn-by-turn, climbing, diving and banking plan for our flight.

“So, if you don’t mind, please keep everything securely on your body: cameras, phones, anything like that, because if it does crash and explode all over the back of this beautiful aircraft, unfortunately you’ll be staying here helping to pick up the pieces. That also goes for the contents of your stomach. If someone is going to be sick, if you can please put it in an airsick bag because, again, if it goes everywhere, you’re going to have to stay and help us clean it up – if you don’t mind. So: seatbelts, don’t barf unless it’s in a bag and keep holding all your stuff.”

I asked Captain Higgins if I could hold my (heavy) camera to take photos. She said “It would be kind of cool because you’ll see the guys who are in the back who aren’t strapped down – our safety observers, they’ll be floating around and so it would be a really cool kind of picture. I would say definitely have it out.”

As for whether or not she is nervous about her history-making flight as the first female demo pilot, she replied: “No, I’m not. We’ve gotten plenty of practice. My parents are in the crowd so I’m really happy to be able to do it in front of them. Its a great opportunity to be here.”

We applauded her. “The whole flight takes about 8-½ minutes, depending upon how fast I fly it.”

From there we found our seats, belted ourselves in and were each given an airsickness bag. Our flight was unlike anything I’d ever experienced. In the high-g portions, it felt like a super magnet was trying to pull my camera to the deck.

Surprisingly, the plane got quite hot and humid on our short flight. Feeling weightless was wonderful. Fortunately I did not need my motion sickness bag, which will now be a treasured souvenir. The memories will last a lifetime.