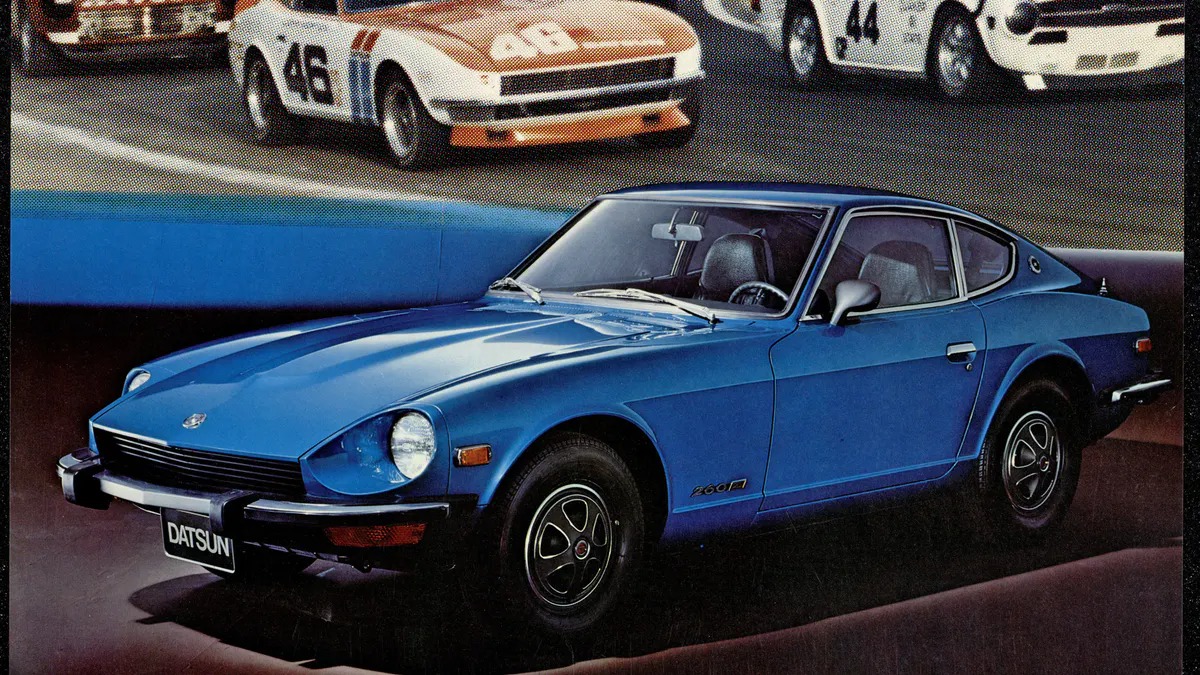 Pete Evanow’s definitive 50-year history of Nissan’s Z-cars awakens vivid memories of our own fond experiences with Z-cars. Authoritative, officially licensed, and filled with photos, this hardcover coffee table book is a fitting tribute and a must-read for fans of the legendary Z-car — all six of its generations, from the 1970 Datsun 240Z to today’s Nissan 370Z. Included are the precursors to the final design of the first Z-car, gatherings of faithful enthusiasts, and the car’s extensive, successful racing efforts, led in the U.S. by Peter Brock and Bob Sharp.

Originally thought of as a competitor to the British MGB, the Datsun 240Z was wildly popular. Demand far exceeded the supply.

In Japan, our 240Z was named Fairlady Z — an homage to the company president’s infatuation with the Broadway play “My Fair Lady.” However, Datsun’s U.S. operational head (the exuberant, inspired and inspirational Yutaka Katayama — affectionately known simply as “Mr. K.”) thought that was too feminine a name for their new sports car, so under his direction, it was renamed 240Z (in reference to the displacement of its 2.4-liter SOHC engine) for sale on these shores (and elsewhere).

Its style was reminiscent of the beautiful Jaguar XKE, its performance Porsche-like, but the 240Z was also affordable, reliable, practical, economical, and inexpensive to maintain.

With its lightweight, fully independent suspension, and SU carburetors, the stock 240Z was quick and agile. The spacious area beneath its hatchback easily swallowed ample luggage for two, its reclining bucket seats were comfortable and its innovative Hitachi signal-seeking AM radio (with its motor-driven pointer that moved across the dial to find the next station after you pushed the round tuning knob) was great for finding new stations on road trips.

On a long-ago road trip from my home in Alberta to Montana (back when there was no daytime speed limit in Montana), I could cruise for hours at over 90mph in my Mandarin Orange 1970 Datsun 240Z, passing cars with big V-8s because those engines were unable to sustain high speed. I still remember the thrill I felt just by sitting in mine at a drive-in movie theater, as I watched Steve McQueen’s “Le Mans.”

I competed with my Z-cars in motorsports competitions (in autocross – known in Canada as slaloms, road rallies, and ice dices). Easy and inexpensive to modify, with readily available performance parts, my second 240Z (a 1970 model, bought VERY used) received common suspension mods: sway bars, springs, and shocks. Learning to work on this car myself saved money and was particularly instructive. The experience left me with a lifelong, indelible memory of what can happen when one does not tighten the three opposed spring compressors progressively enough, a little bit at a time: they snap together in an instant, under extremely high pressure! Luckily none of my fingers were in the way.

With its suspension upgrades, my 240Z gained easily-controllable, on-demand lift-throttle and trailing-throttle oversteer. That, combined with its strong, reliable acceleration, made the car perfect for negotiating tight turns of autocross courses. I often beat Corvettes of that vintage when I autocross at Corvette club events in their “tin” class.

Over the years, Federal safety, emissions, and other regulations mandated changes, adding weight and size to the Z-cars…

… but through technological innovations and the will to prevail, the manufacture of Z-cars has continued for 50 years — a rare accomplishment for all but a few other sports cars.

The introduction of the 1970 Datsun 240Z represented a radical departure for Nissan. Previously the company was perhaps best known for its well-built and reliable but, for many, unexciting automobiles. Notable exceptions were the 1600 and 2000 roadsters, and the 510 (the 2-door and 4-door versions, with their fully independent suspension hidden under their practical, boxy exteriors). Those cars hinted at what was to come, but Nissan needed a halo car, like Chevrolet with its Corvette, in order to break out from their mold. They did so, likely beyond their wildest expectations, and in so doing earned the loyalty and support of countless Nissan customers to this very day, with the introduction of the 240Z. A 1971 240Z recently sold for $310,000, and an all-new Z-car is likely to arrive soon.